WRC Australia: Latvala leads, Tanak off as Ogier on track for title

Latvala set a stunning pace on the first stage of the morning, SS19 Coramba, as he attempted to fend off a potential charge from Kiwi Hyundai driver Hayden Paddon.

But Latvala took 13.9 seconds out of Paddon in that first stage of the loop alone, putting him in position to inherit the lead on the next test.

Tanak was caught out by a tightening right-hander which hindered multiple crews. However he got deep into the undergrowth half-way through the corner, and had to reverse to get back out onto the road.

He lost his 12.6s lead and trails Latvala by five seconds at the end of the morning's running.

Latvala had been told to remain behind Ott Tanak when the latter was leading, as Tanak has to win to have any hope of the WRC title.

The Toyota team now have to decide whether to switch Latvala and Tanak this afternoon, to give Tanak the best possible chance of a title.

Paddon went quickest on SS20 Sapphire in his i20 WRC, and trails Tanak by 14.6s at the end of the morning's action. 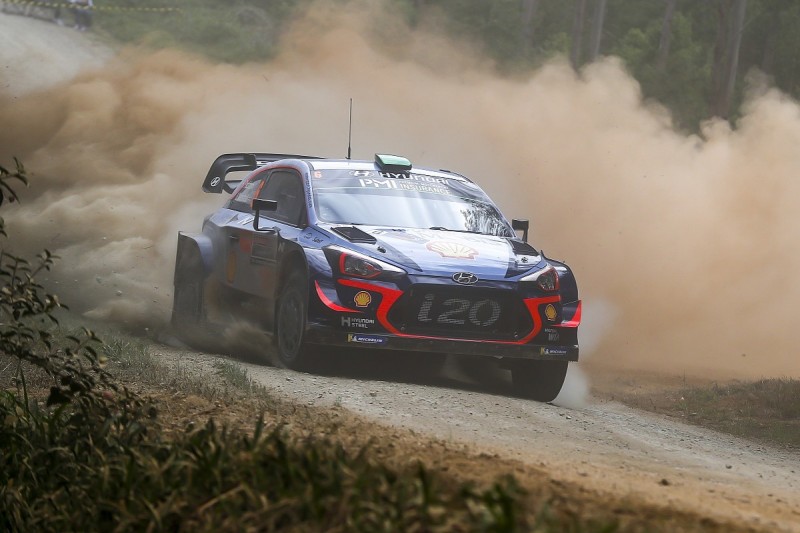 If Toyota wants to switch its drivers, it must make sure it has time in hand, as Paddon is within striking distance.

Toyota is leading the manufacturers standings and will not want to hand any points to Hyundai and Paddon.

Ostberg's Citroen is 28s behind Paddon, and 10.5s clear of Lappi - who set a fastest time on SS21 Wedding Bells to end the morning.

Ogier is sitting in an all important sixth place.

As long as he stays there, whatever Tanak does will not be enough to rob the Frenchman of a sixth world title.

He managed to avoid many of the tricky areas that caught out others and was sixth, seventh and seventh fastest respectively over the three stages. He is 21.6s ahead of Elfyn Evans and - crucially - 39.2s ahead of Thierry Neuville.

As long as Ogier remains in sixth and ahead of Neuville, he will take the title. Neuville had a difficult morning.

On the first stage of the loop - SS19 Coramba - he took nine seconds out of Elfyn Evans ahead of him, despite sliding wide into a bank.

But on the following test he lost around 10s when he ran wide and had to reverse.

The third M-Sport Ford of Teemu Suninen fell behind Neuville on Saturday afternoon, and remains adrift in ninth ahead of the second Citroen of Craig Breen.

After clipping an unsighted tree trunk on the last stage of the loop, Wedding Bells, his car began to gush oil and he was attempting to repair the car on the road section.