Kris Meeke didn't just turn Citroen's 2017 World Rally Championship around by winning in Mexico, he also did the WRC a huge favour with his last-stage near-disaster, reckons DAVID EVANS

I've held off writing this piece for a few days, desperate not to get caught up in the hype or the hyperbole. But it hasn't worked.

Three full days after it happened, I was still watching the video of Meeke's last-stage off in Mexico pretty much on loop.

And it still gives me goosebumps. The last two minutes of Meeke and Paul Nagle's Rally Mexico was real and very raw emotion.

Flying the big jump at the bottom of the hill on El Brinco, everything is dandy - 37.2-second lead and a first victory of a so-far painful 2017 just a couple of corners away.

Meeke attacks the five-right, hits the bump and doesn't get to the 'tightens.'

Pinged off the back of a Volkswagen Passat, they're into a car park.

The next voice is Meeke's. "How do we get outta here?"

The calmness is surreal. But doesn't last. Heart rates are rising and there's a breathlessness and a desperation to Meeke's next: "How we get out?"

It's at this point that the clip begins to feel a little bit, dare I say it, voyeuristic.

Nagle spots a hole in the fence.

Throttle buried, the C3 WRC bounced back onto the road.

As the service park watched the C3 head the wrong way up the car park, it initially seemed all was lost for Meeke.

But once the car was back on the stage and looking straight, there was hope.

"It felt like a lifetime," Meeke later admitted - and at the finish line all he could muster was "holy shit" as he and Nagle debated whether the rally win was gone.

When victory is confirmed, Meeke takes a moment and pulls his helmet and balaclava off. His face red and contorted with emotion. This is too much.

Eventually he gets out and walks around. Then the interviews start.

Half an hour or so later, it's my turn.

The obvious question: how do you put that into words? "I've no fucking idea," he laughs, "don't try and get all poetic now."

Nagle looks over and grins, "Ah, we lost the wing mirror. Sure, we can put one of those back on..."

The wing mirror had been forcibly mounted on the back of a Passat, but even the owner entered into the spirit of things and was placated by an insurance claim and a signed cap. 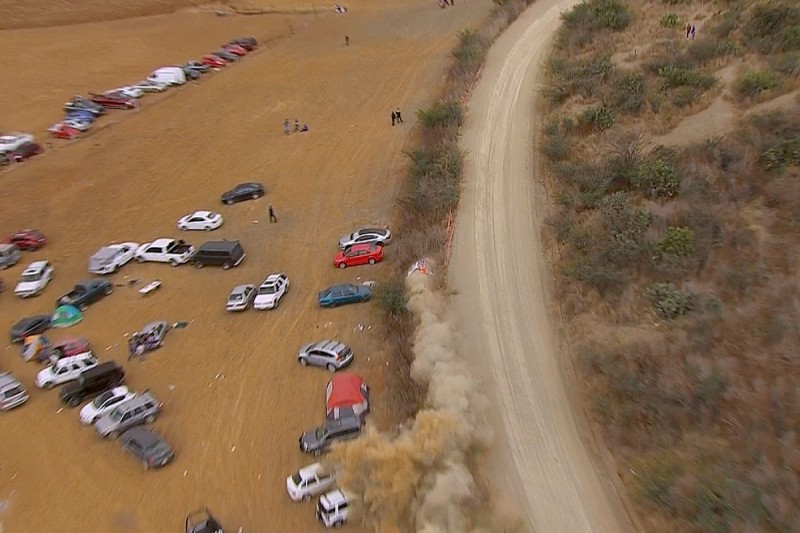 Our conversation is interrupted by WRC Promoter chief Oliver Ciesla.

For him, Meeke's car park adventure was manna from heaven. For the second event in a row - but this time for a very different reason after his infamously sweary onboard video from Sweden - Meeke's done his bit to sell WRC telly.

The whole world saw what he did in Mexico. It even made the media's high altar: BBC Breakfast. The last time WRC footage had such a high general media profile was when Thierry Neuville rolled through a Mosel vineyard on Thursday of Rally Germany 2014 then won on the Sunday.

Meeke accepts the congratulations from Ciesla and grins: "I think it's time we had a talk about my cut from the TV revenue".

And it looks like he's going to contribute a lot more to the 2017 WRC spectacle too. After the nightmares of Monte Carlo and Sweden, Meeke and Citroen found form in Mexico.

It was no flash-in-the-pan, no running-order miracle. The speed was coming from the C3 working very well on gravel, where the WRC spends five of its next six rounds. Meeke is 39 points off championship leader Ogier, but there's 30 on offer on every rally. There could be a lot more late drama to come.