For two stages on Friday morning the two Toyotas ran inside the top five, with Juho Hanninen third overall before he damaged the left-front of his car in a low-speed crash into a tree.

"Of course this is more than expected," Makinen told Autosport.

"I am very happy, very pleased with today. It's been such a good day."

Makinen also played down Hanninen's crash, emphasising his lack of competitive mileage since losing his place in Hyundai's WRC team.

"Juho was very impressive - you have to remember he is very new to this area, he didn't drive these roads ever before," said Makinen.

Hanninen said his crash was simply a consequence of braking too late in SS5's icy conditions.

"We were coming downhill to an icy hairpin," he said.

"I was too late to the brake and I hit a small tree. It hit the left-front wheel and broke the damper. 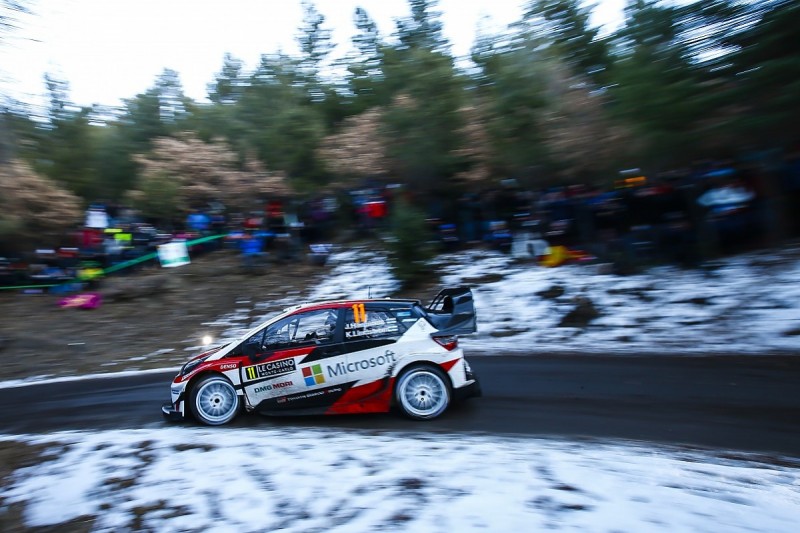 "We have done a lot of work with this car and before coming here we had no idea where we were.

"I'm very happy with the speed and really happy for all of the guys in the team - this is giving so much energy to the whole team.

"We can see we can fight and be close straight from the start. This is really important."

Latvala is 1m24s from the podium positions going into Saturday and believes he would have been closer but for two spins on Friday's final stage.

His day had also been affected by difficulty starting the car in the morning, which meant he did not have time to make planned set-up changes, and minor technical glitches.

"We had a bit of a problem with the fuel sensor," said Latvala, "it was similar to the one this morning which made the car not start.

"I was a bit stressed for this and not driving so well in the last stage.

"But overall, I am happy and relieved. The car has really good potential.

"We hoped to be inside the top six and we have done that already."