Ogier trails Hyundai driver Neuville by 27 points as the WRC prepares to resume after its summer break in Finland next week.

In each of Ogier's five title-winning years so far he has arrived at Rally Finland in the championship lead, with his advantages at this stage ranging from 11 this time in 2017 to 78 points in '15.

Neuville will start first on the road on Rally Finland next week, and is likely to struggle for grip if conditions remain dry.

The Belgian should have faced a similar problem on the most recent event in Sardinia, but prospered when rain arrived and went on to beat Ogier in a thrilling final-stage showdown.

M-Sport driver Ogier told Autosport: "I can still win [the championship]. We still have six races with a lot of points available.

"It's no time to panic, of course it's better to have this joker [points advantage] that they have. But with that comes the question of road position.

"I know we said this in Sardinia, but this disadvantage will come on some events again in the second half of the season.

"The key for me is to be consistent and, like I say, not to panic."

Ogier has long been a chief complainant against the regulation that places the championship leader at the front of the field on the opening day, and said the rule effectively cost him one event this year after starting first in the Swedish snow. 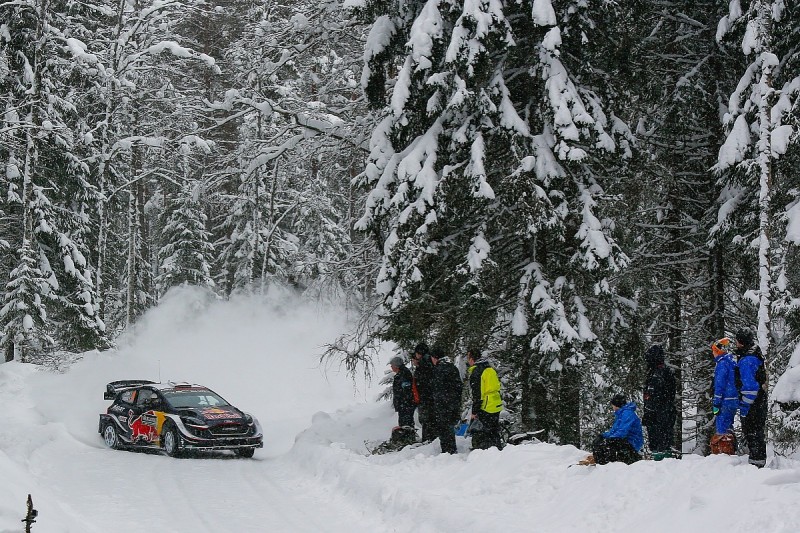 "With Sweden it's like I did one rally less than everybody else," he said. "It's like I didn't even start that rally.

"With the conditions and the position on the road, I had no chance - I was beaten by the R5 cars.

"All I can do now is focus on doing my best. I come back without the weight on my shoulders to open the road - which can sometimes be difficult to handle.

"So far Thierry had a good, consistent season. He has the luck with him at the moment, even on the bad weekends he has scored good points. Now we come back with the extra excitement of this new challenge.

"I don't say it's my toughest challenge, everybody said that was last year, and I don't say this is the most important challenge; every year is important, every championship is important and if I don't win this year then I am still a five-time world champion. Nobody can take this away.

"You can count on me. I'm not giving up and it should be a very exciting second half of the season."