The Frenchman won Rally Monza by 13.9 seconds from outgoing WRC title holder Ott Tanak to become only the second person in history to win the series with three different manufacturers.

In the lead up to the season finale, Ogier had told Autosport a seventh title would mean less than the previous six because COVID-19's widespread effect had led to the creation of a "mini-championship".

"The season definitely has been special, much shorter than expected but, like I said, crossing the finish line, of course I am happy, but I don't jump in the air," said Ogier, who will remain at Toyota for 2021.

"It is not the time for that [celebrating]. I think the whole world is in a difficult situation right now - a lot of people are suffering at the moment, so I have to be decent, you know.

"Of course, I enjoy that we have done our job pretty well but I hope that soon, we will be able to celebrate more." 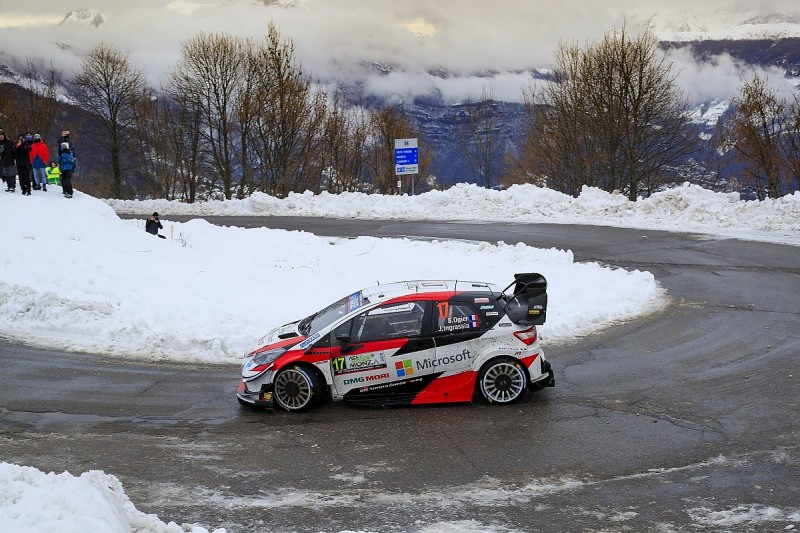 Toyota team-mate Elfyn Evans carried a 14-point buffer going to the title-decider in the north of Italy and appeared to be on course to end the UK's 19-year wait for a WRC champion.

But an off on the penultimate day when the rear of his Yaris WRC broke free in snowy conditions dashed those hopes and made Ogier's job more straightforward.

Reflecting on those events, the Gap driver admitted Evans' setback had also put a dampener on his celebrations.

"With Julien, we've been quite happy with the performance we've had," said Ogier. "Of course, one of the bad turns was Rally Turkey for us where we lost the championship lead [with engine problems].

"After that, not knowing how many events were remaining, it was never going to be an easy challenge to come back. We just said that we came here with this 14-point disadvantage knowing that the only chance we had was to put maximum pressure on Elfyn and try to win the rally and force him to score big point if he wanted to remain in the lead.

"At the end, it turned out to work well for us so, of course, when that happened, I also once again didn't jump in the air because it was my team-mate off the road and at this moment, we lost as well the manufacturers' title, so I couldn't really enjoy it.

"But personally, of course, it meant that if I finished the job I would be there [at the finish] talking about the seventh WRC title. So, I am very happy with that and very happy for the whole team."