M-Sport has called for Pirelli to strengthen its World Rally Championship wet weather tyre following a spate of punctures at Rally Croatia.

Tyre issues have been a significant feature at the third round of the championship, with the problems exacerbated by tricky wet and foggy conditions and Croatia’s unique asphalt roads - that feature numerous cuts where gravel and mud can be dragged onto the surface.

In recent years Pirelli's full wets have been rarely used in the championship, with many of teams and drivers lacking experience on the rubber. This weekend is the first time they have been used in competition since the introduction of the Rally1 hybrid era this year.

Five of the 11 Rally1 car field suffered punctures on the wet compound on Friday with rally leader Kalle Rovanpera joining that list on Saturday.

Toyota’s Elfyn Evans was hit by two front left failures that derailed his podium bid Friday morning, while team-mate Takamoto Katsuta suffered a puncture in the afternoon along with Hyundai’s Ott Tanak.

M-Sport has so far been the worst affected team as Pierre-Louis Loubet was hit by three punctures in two stages, putting him out of the rally, while his stablemate Gus Greensmith suffered four failures on that compound.

“It is something we need to look at as a championship pretty quickly,” Millener told Autosport on Friday night.

"I want a stronger tyre. We rarely use the wet tyre and before this rally we knew it was going to be wet and we were looking back to find out where we could get some relevant date but I don’t think we have used the tyre for a good few years.

“When you have tyre you use once every couple of years you don’t spend a lot of money and effort into that, and that is fully understandable, but it has shown here with these cars and conditions we do need to look at what we can do.

“Even if nothing happens, we need to have a discussion about it because it is not fair on the drivers and teams, as we spend a hell of a lot of money to compete the best as we can. If you make a genuine mistake then that is fair enough but when so many people are affected I think we need to work together.

“We should sit down after the event and give our feedback and see what we can do, it is not a hit at Pirelli at all. The last thing they want is this but we do need to sort that out.” 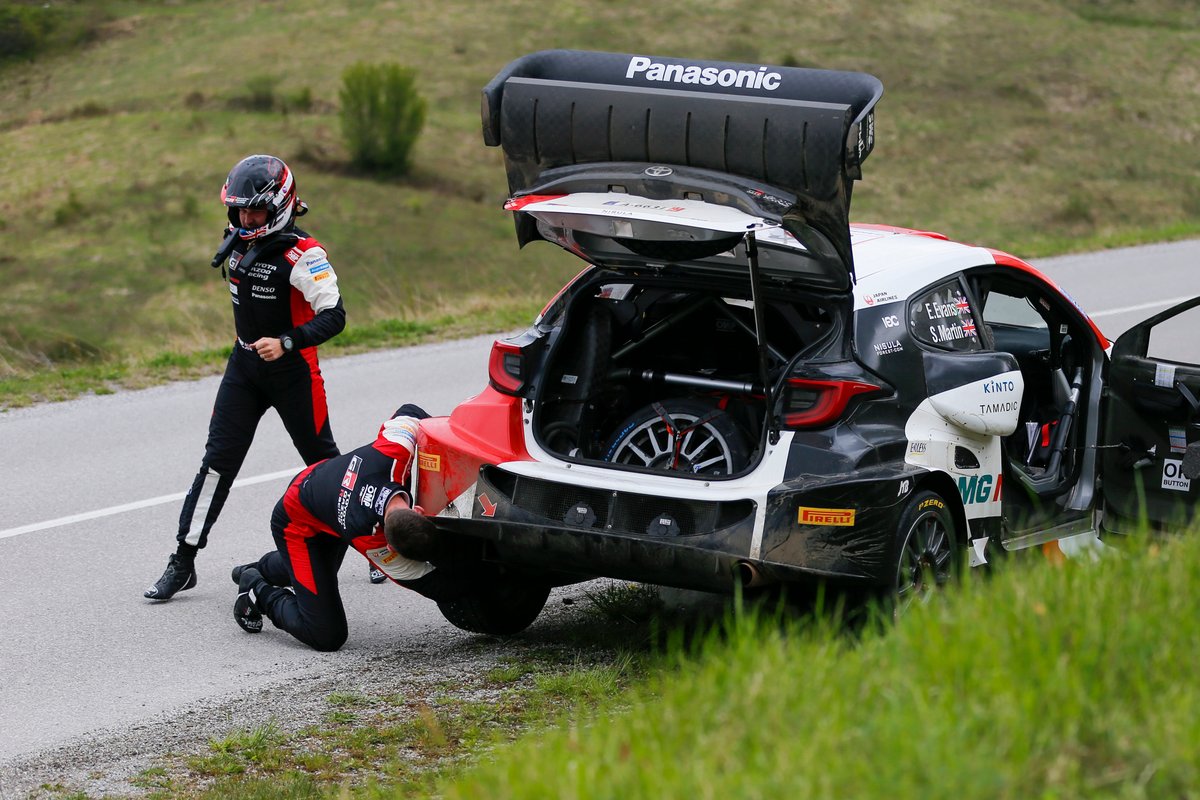 In response to the call, Pirelli's rally activity manager Terenzio Testoni said there was no reason for a “big panic” and that the number of punctures is not unusual, stating that the extreme conditions had been a contributing factor.

Testoni revealed Hyundai had used the wet compound tyres without issue during an inclement pre-event test in Croatia.

“If you look at what happened yesterday, we are on line with what we expected,” Testoni told Autosport.

“In total, in Rally1 we had eight damaged tyres which with three the wheel rim was broken completely, so for me really we had five punctures. Five punctures in one day, I cannot say it is a big panic.

“This is also the first time the teams are running on full wet specification, the first time in two years. For sure, the team need to get some experience. In the [pre-event] test [with Hyundai] everything was fine.

“What we know is the conditions are very very hard. When the grip is very low and the visibility is very low you drive everywhere but not on the road and this is what happened to the tyre.

“For sure we need to wait until the rally ends to analyse everything that has happened and for sure we will meet with all the teams to see what they think, but for me at the moment it is not panic. I would panic if we had like 20 punctures.”

When asked if the tyre had been strengthened for Rally1, he added: “Not yet for two reasons. The tyre is used for 5% of the season and also with the experience we have in national rallying at European Championship rallies, the tyre is quite strong. The conditions yesterday were really bad.

“Now we collect information from the teams but we are not panicking. We are always trying to find new technology with the tyres wet or dry.”