Lappi was seemingly on his way to a comfortable third place finish on home soil when drama struck in Sunday’s penultimate stage.

The Finn got caught in a rut at a left hander which pitched his GR Yaris into a roll, with the car rotating three times before landing on its wheels.

The crash ripped the rear wing from the car, smashed the windscreen and damaged the radiator. It was the second time that Lappi had to contend with a broken windscreen during the event.

However, Lappi managed to re-fire the car and reached the stage end losing only 18s in the process.

With power steering oil and fluid escaping from the car, a quick thinking Lappi picked up some water bottles at stage end, before driving to a nearby lake to gather more water to re-fill the radiator.

While stopped at the lake, Lappi and co-driver Janne Ferm worked to fix the leaks and removed the broken windscreen, before heading to the final stage with the pair forced to wear goggles for protection. 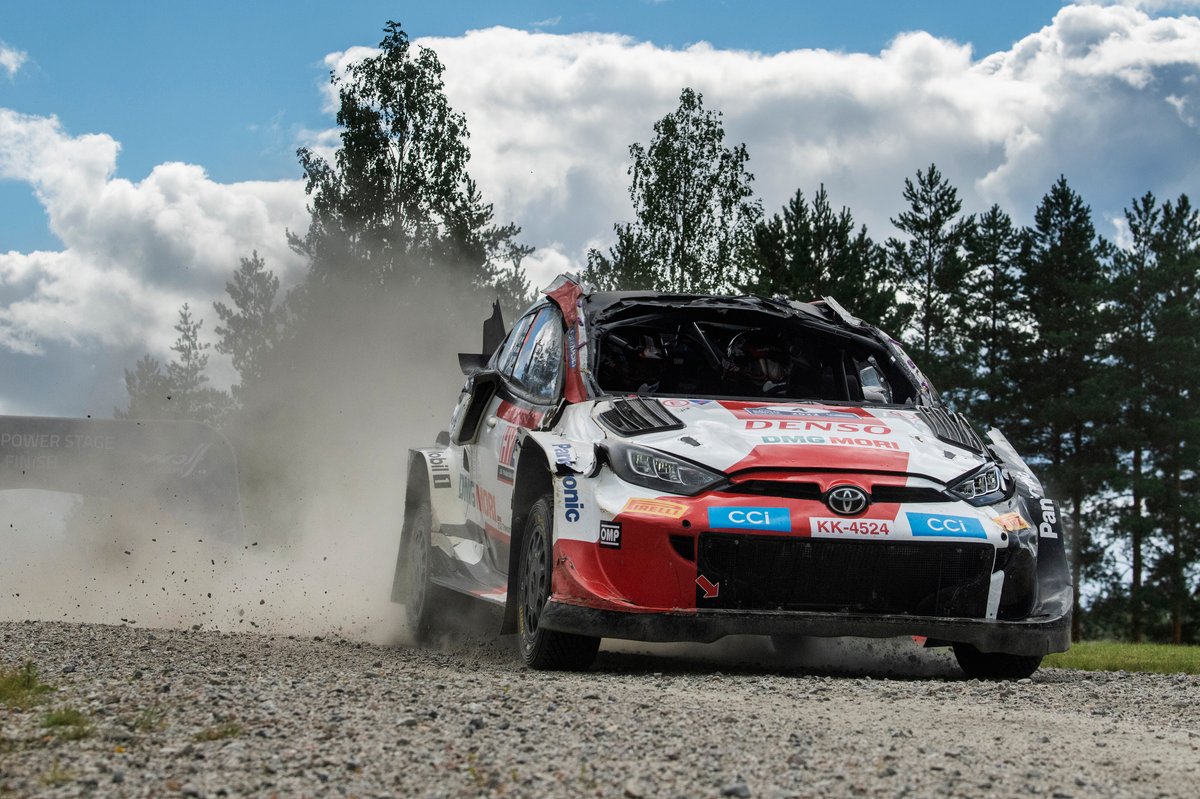 The duo then completed the stage despite shedding part of the car's roof that required Ferm to shout the pace notes to his driver in order to navigate through the test, to secure third in the strangest of circumstances.

“I was lucky we managed to survive and fix everything,” said Lappi. “For sure this one of the strangest podiums ever.

“First of all the roll was a big surprise for me as the corner where it happened I know it very well.

“I checked on the first pass that there is space on the outside to go a bit wide and now there was a huge rut which stopped the car and starting rolling immediately.

“I was ready to stop but then Janne told me to start the engine. I thought maybe I will try but the windscreen was fully f*****, so I thought I would have no chance.

“Then we went to the finish and there was power steering oil on the windscreen and a lot of smoke, so I knew for sure something is wrong. We managed to fix every problem after the stage.

"We got some bottles from stage end for drinking but for sure we didn’t drink them. But that is the benefit of this rally being known previously as the 1000 Lakes - you can stop [at a lake] for water. I filled all the bottles and my camel bag as well to make sure we had enough water.

"Then we started the last stage and we lost the roof completely on the first acceleration and then there was some air inside of the car.

“Janne needed to shout the pace notes because there was so much sound from the airflow. It was quite a story.

“It was pretty much okay [with the goggles on], there wasn’t too many flies luckily. When I saw there were ruts I backed off to make sure no rocks bounced into my face.”

To mark the bizarre events that led to his podium Lappi donned the goggles again to receive his trophy on the podium, where he joined rally winner Ott Tanak and Toyota’s Kalle Rovanpera.