Ott Tanak would be "stupid" to take unnecessary risks on the final day of the World Rally Championship's Arctic Rally and put victory in jeopardy, says Hyundai principal Andrea Adamo

Their grip on top spot at the winter event was strengthened thanks to fastest times on three of the stages.

It means that only two Sunday tests - one of which is the bonus points Power Stage - stand between the Estonians and a first win of 2021.

The result would move one-time champion Tanak back into title contention after a forgettable start at last month's Rally Monte-Carlo where he retired and was later issued with a suspended one-rally ban.

"I think Ott would be stupid to try to risk too much," said Adamo.

"I would have to say it has not been a bad day for us with Ott continuing to lead and Thierry fighting back into the provisional podium positions. It has been good to see their performances."

Like many of the leading drivers competing at the Rovaniemi-based event, Tanak remarked that tyre wear was a particular concern for the afternoon stages as the racing line second time through was noticeably harsher on the studs. 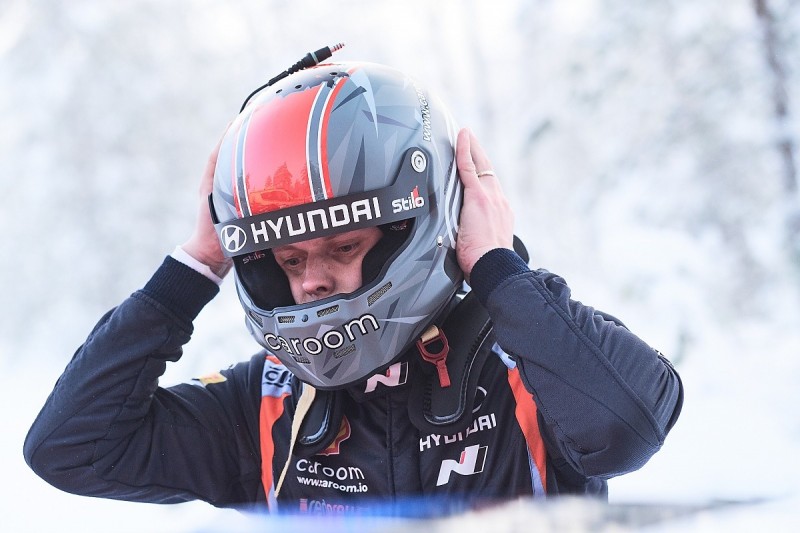 "We took all the tyres we had and used them, so this afternoon was about managing them, getting through and not doing any mistakes," explained Tanak.

"This morning we were still pushing a bit and then this afternoon it was important to come through clean [with no damage].

"The last stage was quite stressful for the tyre and yeah, it was not easy for sure, but for us there was no need [to take any risks]. I mean it was important to come through," he added.

Hyundai remain on course for a one-two finish after Thierry Neuville recovered from his earlier intercom issues to move to within 1.8 seconds of Toyota Gazoo Racing youngster, Kalle Rovanpera.

After running as high as second at one point, Irishman Craig Breen has dropped to fourth, while Oliver Solberg - on his WRC car debut with stand-in navigator Sebastien Marshall - is sixth.

Asked about Solberg's driver, Adamo said: "We didn't decide to have him in a WRC car because we had a spare one left. We did it because we thought it would be possible for him to do well.

"Of course, if you would have asked me before [the rally] I would never have bet he could have done what he has done from the second stage.