The governing body emphasised no parts were being run illegally - all manufacturer World Rally Cars comply with the homologation documents - but that the regulation concerning aerodynamics needed clarification.

The FIA has given the teams until next month's Rally Turkey to comply. Autosport understands Toyota's rear wing was at the heart of the debate, with clarification required to confirm its specification and measurements.

The suggestion to Autosport was that Toyota's rear wing sat outside the regulations, although the aerodynamic specification of the Yaris' rear wing has not changed since it was homologated at the start of 2017.

Asked specifically about Toyota, FIA rally director Yves Matton told Autosport: "There is no story about the Toyota rear wing. There has been a clarification concerning the rear wings from the World Rally Cars. 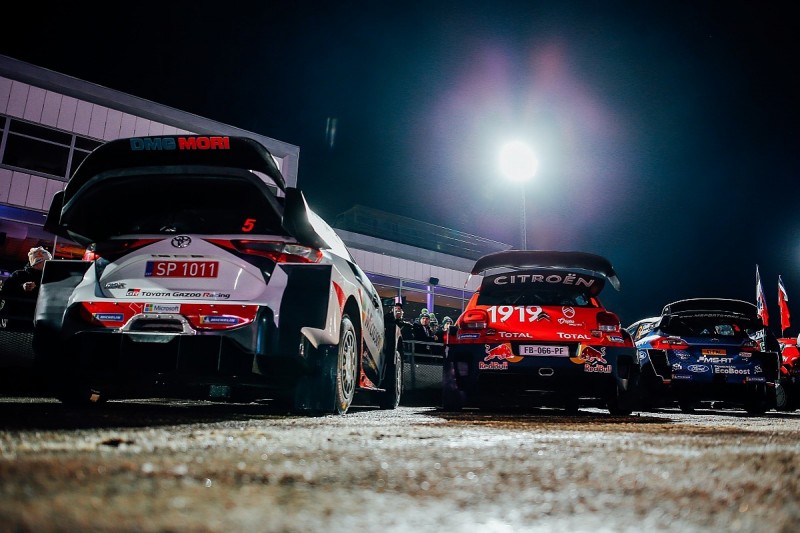 Following two late-night meetings on Friday, the teams put together a combined statement: "There is some problem on the homologation on the rear wing.

Toyota declined to comment beyond the statement, but a source told Autosport: "What caused this confusion?

"The car was presented to the FIA for homologation at the start of 2017. The FIA passed the car for homologation. These are the facts. Since then, the car has passed scrutineering every time, because the rear wing complies with the homologation document."

Matton accepted the FIA was at fault in the original homologation process, adding: "I would say, if there is a fault, it's the FIA.

"This is not Toyota, I told you all the cars are part of this action plan [for Turkey]."

Why was this clarification needed?
When you make a homologation process, there are different interpretations between manufacturers, and this was the case here. That's why the clarification has been asked.

If you're given dimensions to work with, how can that be interpreted differently?
It's not so easy like that. It's not [that] you give a dimension... it's an aero regulation which is quite complicated, based on different figures, and different measurements and conditions. It's not just, [for example], 'this dimension from there to there'.

You have to take in all of these conditions, and there could be some different interpretations. That's the reason we had to check this, and this is why this clarification has been asked.

So they are in contravention of regulations, but homologated by the FIA?
No. Then whose fault is it that we need this clarification? I would say if there is a fault, it's the FIA, then. This is not Toyota [at fault], I told you all the cars are part of this action plan.

What's in the action plan?
That's between us and the manufacturers.

But there's no room here for different interpretation in the clarification?
We clarified how the text needs to be read. Why was that regulation not written tightly enough in the first place? The regulation will not change.

OK, why was there need for the clarification...
Before [now], nobody asked about this regulation. Maybe it's our fault that we have not seen this regulation could be interpreted differently. But now it's clear.