Analysis: Why Rally Sweden is still in jeopardy

The organisers considered whether to cancel it outright at the start of this week but are pressing ahead with a shortened itinerary and counting on a forecast 'big freeze' hitting before the event starts.

DAVID EVANS explains how the WRC has found itself in this position and what threats the rally still faces.

How sure is the rally to run now?
Unfortunately, it's not sure at all. If the temperature doesn't drop quite a long way below freezing by Wednesday or Thursday then it remains almost impossible for the rally to go ahead. What the organisers need now is consistent temperatures of minus 10 through the night. With all the melted snow and rain, the roads are so full of water, they'll freeze hard and provide a pretty good ice base.

So, we don't need snow?
No. Ice is far, far more important than snow. Think of snow as the icing on the cake; ice is the sponge, the jammy middle bit and the other sponge. The roads are very different without snow banks and the way the drivers attack the corners will also vary greatly - without snow, there'll be no leaning on the snow banks! With no snow, the key is to keep the car in the middle of the road, no cutting corners and no running wide.

Are the stages all as bad as each other?
Generally Friday's stages are a bit better - they're further north, slightly higher altitude and generally more snow-sure. Torsby and Rojden stages have a pretty good ice base at the moment. That said, Kirkenaer is more of a swimming pool than a stage.

What's the implication of trying to run the stages without a snow and ice layer?
The roads would be completely destroyed. Each tyre has 384 studs fitted; every car means 1536 metal studs tearing a soft gravel roads which doesn't take long to make deep ruts in braking areas and on the exit of corners.

The safety implication of that is two-fold: the studs last about 12 miles before they start to be ripped out and when they're gone there's nothing to slow the car down when they find the occasional patch of ice. If that car does go into the trees and needs assistance, it will take the First Intervention Vehicle a lot longer to get to the scene because of the rough conditions.

Beyond that, there's the financial implication: the organisers have to pay to fix the roads and running a route with no snow or ice would potentially bankrupt what is already a fairly financially strapped rally. 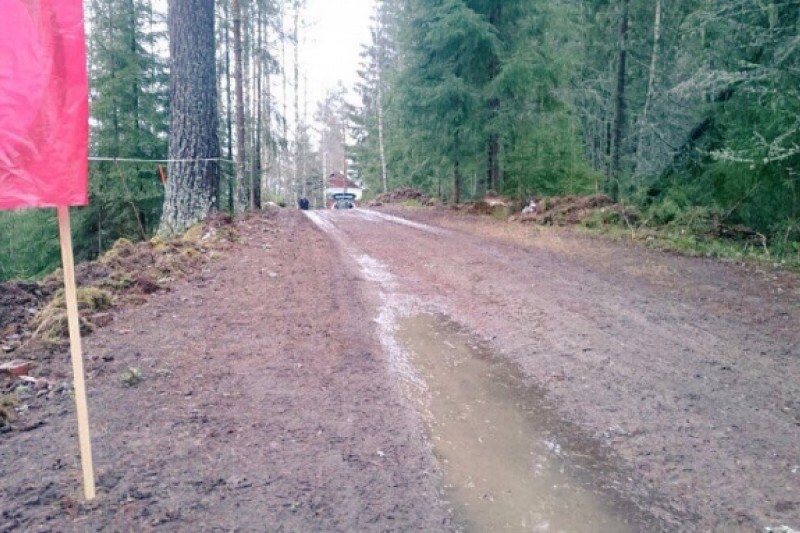 Torsby, which is first up on the recce, is one of the stages in better condition...

Could the rally go ahead with gravel rather than studded tyres?
No. This is officially a snow rally, which means studded or heavily treaded winter tyres are fitted. Tyre companies simply wouldn't bring regular gravel tyres because the accepted norm is for snow and ice - where anything other than a studded option would make no sense when studded tyre are permitted in the regulations. Besides, the tyre companies are already in Sweden with studded tyres and there's no time to ship hundreds of gravel tyres out to Karlstad.

Do any snow or winter rallies run without studded tyres?
Yes. The opening round of Rally America, the SnoDrift Rally in Michigan runs without studs and there's always loads of snow and ice there. It's very dependent on local traffic regulations - in some places studs aren't permitted on the roads. In Norway, for example hire cars don't come with studs, but across the border in Sweden, they're all fitted with a five-mil 'button' stud.

It feels like a lack of snow on this rally is regularly a problem - should the WRC look elsewhere for a snow rally?
There are constant rumours of winter rallies being considered, but there are no concrete discussions - despite the speculation - with Russia, Japan or China. All have very good winter events and, rest assured, WRC Promoter will be talking to them in the near future. Are, a ski resort much further north between Trondheim and Ostersund, is regularly touted as a potential venue for the event. Trouble is, there's no guarantee of regional funding for an event up there and a ski resort in the winter doesn't really have too much trouble filling its hotels.

Based in Rovaniemi, just inside the Arctic Circle, the Arctic Rally would be another option. Trouble is, Finland already has a round of the World Rally Championship.

How bad is this situation for Rally Sweden?
It's bad. The economics are really tricky: if they cancel, they'll run into some severe financial strife with money already laid out and if they run and damage the roads, the repair bill could be crippling. On top of that, the organisers aren't exactly on the same page with WRC Promoter regarding a hike in fees needing to be paid for the privilege of running a world championship round...

With the European Rally Championship's snow event in Liepaja postponed, is it fair to say this is happening more regularly?
Not really. This event was cancelled due to a lack of snow and ice in 1990 and since then it's been hit and miss; some years the conditions have been exceptional: freeze-your-eyes-shut minus 40 on stages lined by monster walls of snow, some years it's rained non-stop.

Will things change next season?
Most likely yes. WRC Promoter, not unreasonably, wants some winter in the winter rally it's promoting on television. Politically, the situation is an interesting one at the moment: winter rallies aren't exactly knocking down the promoter's door and Rally Sweden appears increasingly disillusioned with the economics of the championship. The balance of power between Sweden and the promoter is very hard to call right now. It could be we have no winter rally at all next season.

WRC Rally Sweden to go ahead with truncated itinerary

Craig Breen determined to prove worth on Citroen WRC debut