Kristoffersson beat 2016 champion Mattias Ekstrom in their Q3 encounter on Sunday morning to set the fastest time but lost out to Timmy Hansen in the last qualifying race of the season in Q4.

Watch live World RX action from South Africa UK from 12:00 on Motorsport.tv, on channels Sky 447, Virgin Media 545 or on demand (UK only).

Despite Hansen saving a massive slide in the first corner to take the lead of the race and set the fastest time, Kristoffersson edged Hansen's team-mate Sebastien Loeb on track and was second fastest to maintain top spot.

Hansen's second fastest time of the weekend, following his Q1 performance on Saturday, ensured he climbed to second overall, with Ekstrom third and former fellow DTM driver Timo Scheider fifth, the German sixth and then fourth in Sunday's qualifying races.

Ekstrom achieved third place in the Intermediate standings despite picking up a five-second penalty from the stewards on Saturday evening for contact at the start of his Q2 race.

Hansen's first corner move in Q4 was a near replica of that of his younger brother Kevin Hansen, who also won his Q4 race and was an impressive third fastest in a 2016-specification Peugeot 208 WRX, leaving him eighth at the end of qualifying.

Having led the order at the end of the opening day on the new Killarney rallycross circuit, Hoonigan Racing Division driver Ken Block lost time a the first corner battle in Q3.

He then had a close race with team-mate Andreas Bakkerud to the finish of their Q4 race, Block collecting a tyre stack at the final chicane and spinning across the finish line. 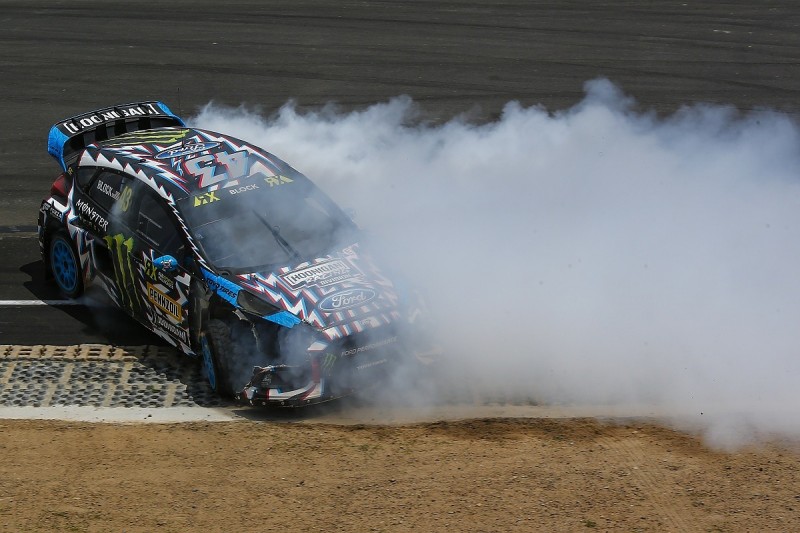 Despite Bakkerud only setting a best time of ninth between the two drivers in the two races, both comfortably maintained their top 12 positions in fifth and sixth overall.

Petter Solberg lost ground in the final race of Q4, having started on the outside of the grid he ran wide onto the perimeter grass at the first corner.

The Norwegian lost out to Ekstrom after the joker laps played out and ended up seventh overall, three places ahead of nine-time World Rally champion, Sebastien Loeb, in 10th.

Ekstrom's EKS team-mate Toomas Heikkinen survived a second corner spin in Q3 to make it into the top twelve.

Kevin Eriksson also made it into the semi-final qualifying positions in a last ditch effort in Q4, capitalising when his younger brother Oliver Eriksson, driving for the OMSE team, spun at turn six on the final lap of Q4 and got stuck on a tyre bale (pictured below).

The third EKS driver, Reinis Nitiss, wasn't so lucky. He spun on the entry to the first corner in Q4 after contact with Oliver Eriksson and finished his season 18th. 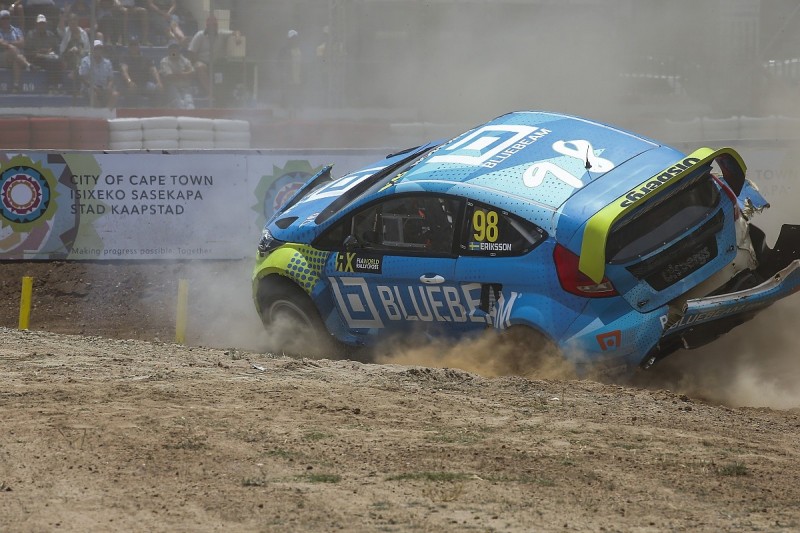