The Norwegian was on top at the Intermediate Classification, then won his semi-final and started on pole position for the final.

Reinis Nitiss joined Solberg on the front row, with the pair running side-by-side towards Turn 1.

They were challenged by second-row starter Toomas Heikkinen, who made a mega getaway and tried a move around the outside but wasn't able to pull it off. He then immediately took his joker.

Solberg and Nitiss waited until the final lap to take their jokers, with Solberg exiting in the lead and securing his fifth win of 2014, while Nitiss had a relatively quiet run to second.

"It's been a fantastic year," said Solberg, who won on three of the four continents visited by the series in 2014.

"Probably the biggest development we had on the car all year has been before this race, and to win the last race of the season is very important for me and all of the mechanics. It's a fantastic feeling."

Hansen was next to take his joker on lap two, returning to the main circuit behind Heikkinen, while Bakkerud took to the extra route on lap three but lost time.

Eriksson rose to third and waited until the last lap for his joker. Heikkinen passed him into the penultimate corner only to spin, handing the position back to the RX Lites champion and giving him a podium on his Supercar debut. 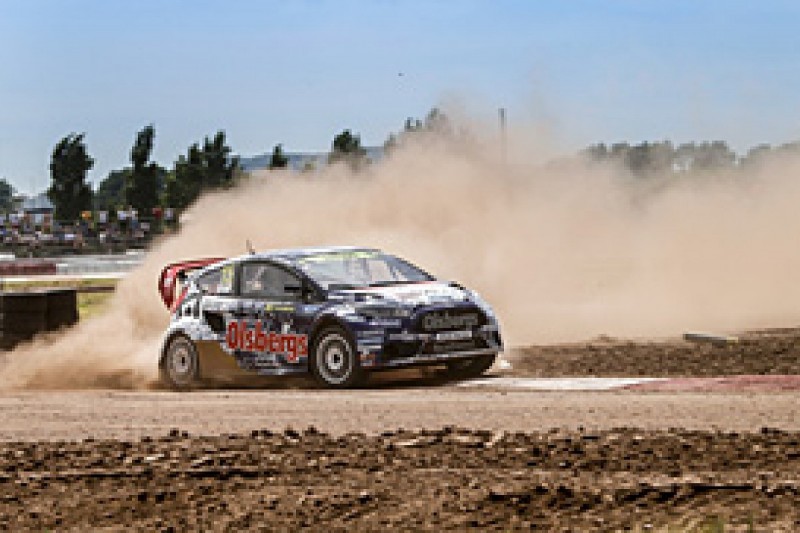 Nitiss's podium finish and a strong points haul for Bakkerud through the event was enough to give Olsbergs the teams' championship, ahead of factory Volkswagen outfit Marklund.

Former World Rally Championship driver Manfred Stohl had a strong event in the second PSRX Citroen DS3, but crashed out of his semi-final.

Albatec Racing had its strongest weekend of the season, with both Andy Scott and Jacques Villeneuve's replacement Ollie O'Donovan making the semi-finals.