Double World RX and 2003 World Rally champion Solberg was forced wide at the start of semi-final two on Sunday before being hit by Janis Baumanis's STARD-run Ford Fiesta.

Although Solberg's Volkswagen bore little visible damage, the event was delayed for 25 minutes while medical crews extracted Solberg, who reported back pain, from the car.

He was then taken to hospital, where x-rays revealed a broken collarbone.

With just 11 days before administrative check-in for the penultimate round of the World RX series at the Estering in Germany, Solberg's participation in the next event is in doubt.

Collarbone injuries are generally considered to take in the region of three weeks to heal.

Solberg's chances of winning a third World RX title were put out of reach at Riga by team-mate Johan Kristofferson, who claimed the title and secured the teams' championship for the PSRX squad. 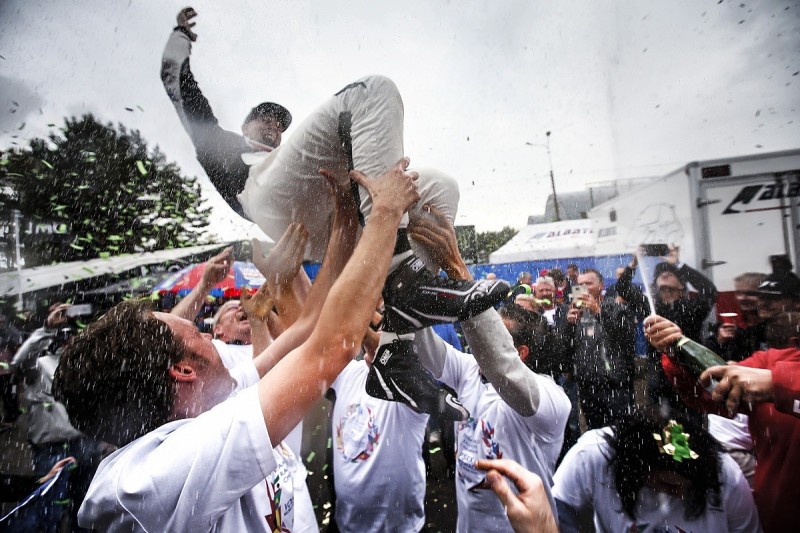 Solberg's wife and PSRX team principal Pernilla Solberg called Kristoffersson's success "unreal" and "a dream come true" but added: "at the same time, I am devastated that our driver and my husband Petter was in hospital when our big dream came true.

"It's all together a very emotional feeling: I am crying both happy tears and sad tears at the same time here."

Although Solberg remains second in the World RX drivers' standings, his Riga accident means he is now just five points ahead of outgoing champion Mattias Ekstrom and 15 up on long-time WRC rival Sebastien Loeb.

The PSRX squad has entered three Polo GTIs for the next round in Germany, Volkswagen Motorsport test driver Dieter Depping joining Solberg and Kristoffersson in the team.

The Riga crash was Solberg's second significant accident in as many seasons.

He was taken to hospital following a heavy impact after the chequered flag at last year's Canadian round in Trois Rivieres, when Anton Marklund's Volkswagen Polo suffered brake problems and hit the rear of Solberg's title-winning Citroen DS 3 after the finish.