World Rallycross Championship leader Johan Kristoffersson finished top of the order on day one at his home round in Sweden, sharing fastest times with Sebastien Loeb

Rally legend Loeb was fastest in Q1 at Holjes, as PSRX Volkswagen Sweden pairing Kristoffersson and Petter Solberg both lost time in traffic.

Solberg ended up behind Andreas Bakkerud after the first corner of his race and had to pressure him to the finish, while Kristoffersson went off at Turn 1 as a result of a touch with Timmy Hansen and fell back.

Regardless, he recovered to win the race and finished second fastest overall in the first round of qualifying.

It was a similar story in the last race of the day in Q2. As Kristoffersson took the lead into the first corner, Solberg had to slot into third behind Bakkerud while Loeb and Niclas Gronholm, who had been an impressive fifth fastest in Q1, took the joker lap at Turn 2.

Solberg was next to take his joker on lap two, but returned to the standard lap behind Loeb.

Bakkerud responded by taking his joker on the following lap and held onto second place, while Kristoffersson set the fastest lap of the day on lap three before taking his joker at the start of the final tour and rejoined in the lead - going on to secure his overnight top spot.

Loeb wound up second in the standings so far, having been fifth fastest in Q2 behind Kevin Eriksson, Bakkerud and Hansen. 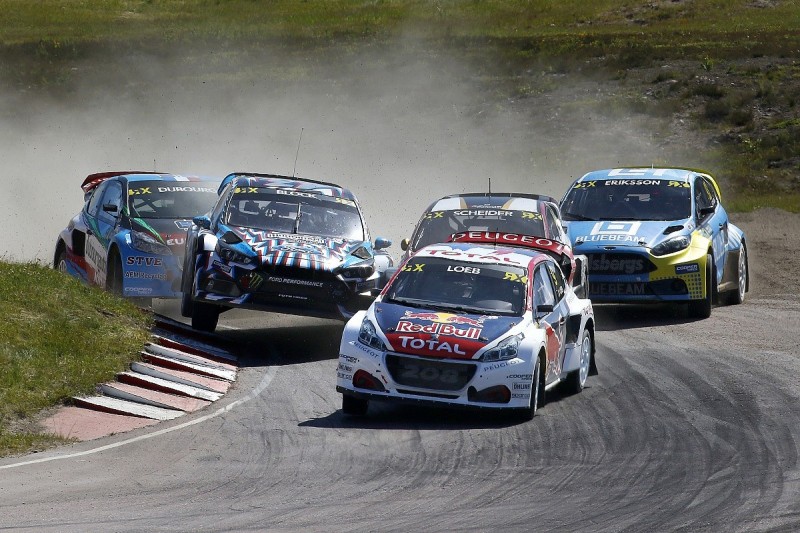 Eriksson's impressive form on his home circuit, despite losing at least half a second with a decision and direction change at the joker entry in Q1, leaves the MJP Racing Team Austria driver fourth overnight, with Solberg fifth and Hansen sixth.

With reigning champion Mattias Ekstrom absent on DTM duty this weekend, only one of his EKS Audi team's three drivers is inside the top 12 at the end of Saturday - Reinis Nitiss.

Toomas Heikkinen was slowed by a technical problem for the majority of his Q2 race and ended up 16th overnight, one place better off than Ekstrom's replacement PG Andersson.

Andersson was 17th and 15th in the two qualifiers. His day included a battle with former works Suzuki Junior World Rally Championship team-mate Guy Wilks, but Wilks's torrid year continued as he was pushed into a Q2 spin by Hungarian privateer 'CsuCsu', who was later disqualified.

That left Wilks 21st in the order overnight.