Sebastien Buemi says the #8 Toyota crew ‘copy/pasted’ the set-up of the sister GR010 Hybrid Hypercar on its way to winning the FIA World Endurance Championship finale in Bahrain.

This set-up change was aimed at solving the tyre degradation issues Buemi, Kazuki Nakajima and Brendon Hartley faced in the previous six-hour event in Bahrain last weekend, which caused them to trail behind the #7 car driven by Kamui Kobayashi, Jose Maria Lopez and Mike Conway.

Victory in the 8 Hour race into the night meant the #8 crew capped off the season with as many wins as other Toyota, but it wasn't enough to deny the #7 car a second consecutive title.

Kobayashi, Lopez and Conway only needed to finish the race with 70% of the distance completed to defend their crown, after pole position in Friday’s qualifying extended the gap between the two cars to 16 points.

“We did what we call a copy/paste,” explained Buemi.

“Basically, we took over the set-up from car #7, just to make sure that we don’t have such degradation anymore and it was obviously the right choice.

“In the first stint I was behind the sister car and the Alpine. I decided to save energy and with Formula E experience it’s a bit easier.

“By having that extra lap, we opened the possibility of stopping under full course yellow. And then I think we just had a good pace. 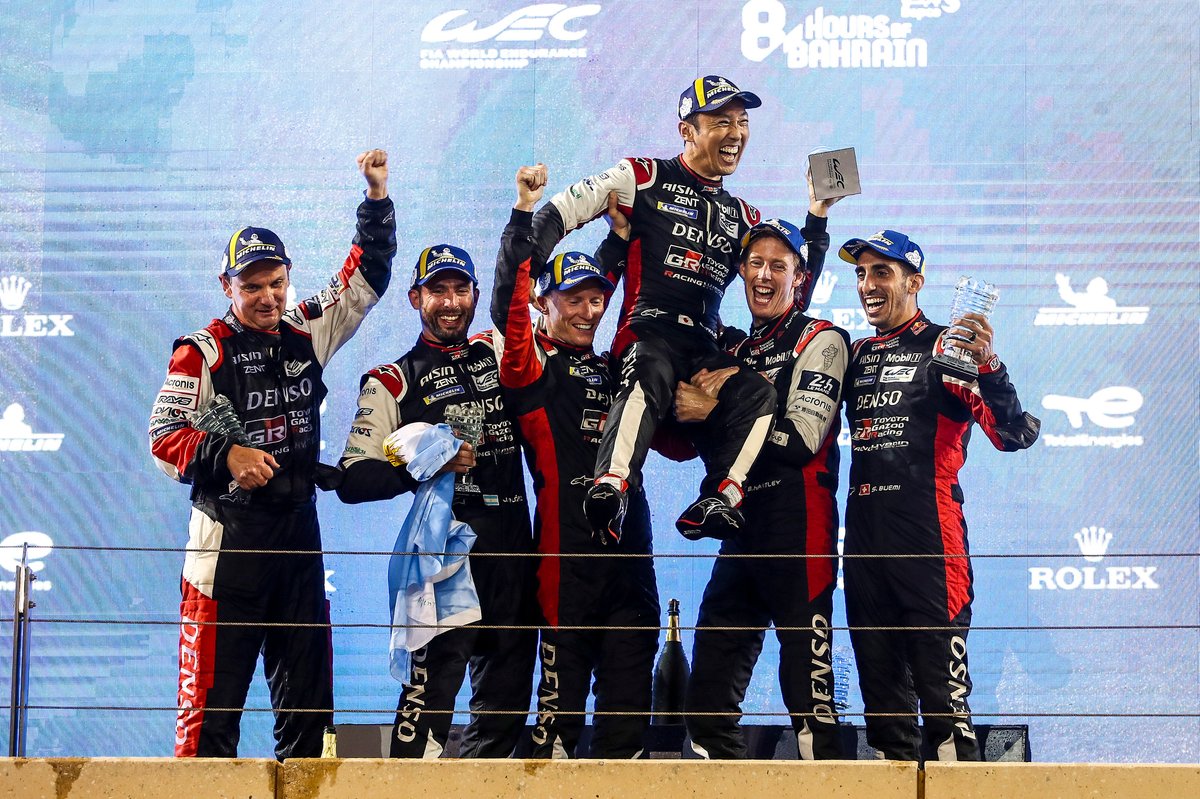 “We were just a bit faster because we lost over 15 seconds to the sister car in the pit stop during the race so I think we had a bit more pace on the track.

“I’m obviously happy with the result. I think they are deserving champions because they’ve done a better job this year, congratulations to car #7.”

Conway held the lead going into the second hour of the race over the #8 Toyota driven by Buemi, having re-passed the fast-starting #36 Alpine A480 of Nicolas Lapierre on lap eight.

But Conway was ordered to let Buemi through as part of Toyota’s rules of engagement, with the #8 Toyota having been the quicker of the two GR010 Hybrids during the opening two stints of the race.

This marked a reversal of fortunes for Buemi, Nakajima and Hartley, who were unable to put on much of a challenge to their team-mates just a week ago at the same track.

Kobayashi said the #8 Toyota had the option of using the set-up of his car the previous weekend as well, but chose to pursue its own direction.

“As Seb said, this time car #8 did a copy/paste for round six. After round five in qualifying, I recommend to car #8 guys to copy/paste our race set-up and they refused it somehow.

“But after round five they realised it's better to copy/paste and they won the race. So this is what happened.

“This is teamwork. This is how we work and we try to do our best as much as we can. We are very open in terms of set-up things.”

Porsche to take WEC case to International Court of Appeal