Porsche wrapped up both World Endurance Championship titles in Shanghai at the end of a race dominated by Toyota.

Brendon Hartley, Timo Bernhard and Earl Bamber were already on course to seal the drivers' crown with third place when race leader Jose Maria Lopez was involved in an incident that sent the #7 Toyota TS050 HYBRID into the pits for repairs and promoted the #2 Porsche 919 Hybrid to second.

Damage to the left-rear suspension and driveshaft prevented the Toyota one-two that would have kept the manufacturers' title mathematically open going into the Bahrain finale in two weeks' time.

The incident for the Toyota Lopez shared with Kamui Kobayashi and Mike Conway allowed the sister car driven by Sebastien Buemi, Anthony Davidson and Kazuki Nakajima a clear run to the victory that had looked likely for the majority of the six-hour race.

Buemi, on new tyres, was closing down on Lopez and less than two seconds behind when the leader tagged the #91 GTE Pro class Porsche driven by Richard Lietz in Turn 3.

The Swiss had just taken second place from Nick Tandy in the #1 Porsche when race leader Lopez spun after contact with WEC debutant Nico Muller in the G-Drive LMP2 ORECA in the opening hour.

The #8 Toyota was in the ascendency for the rest of the race, though different tyre strategies meant it was behind when the sister car hit problems.

Davidson said: "We lacked a bit compared with the #7 car in qualifying, but we have the better car in the race.

"We played it right on strategy and were on the right tyres at the right time, which put us in a good position compared with the opposition and the sister car." 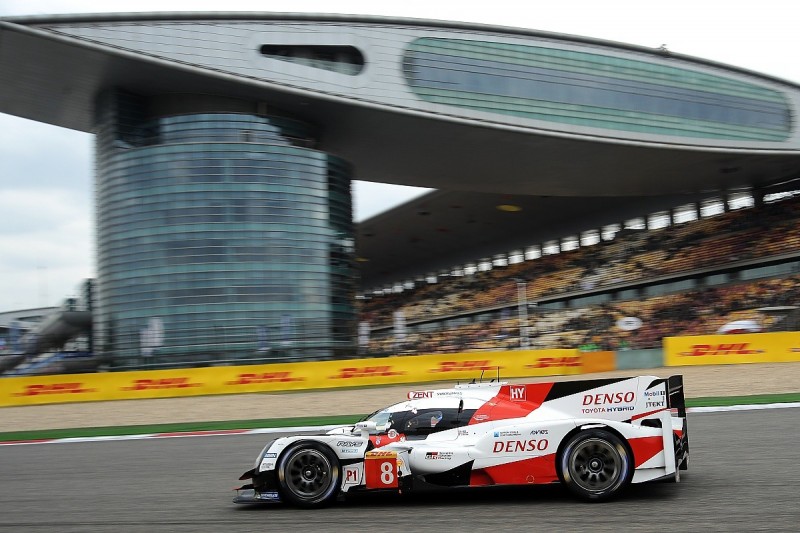 The Toyota TS050s, which incorporated new developments for this weekend, had a clear edge over the Porsches around the Shanghai International Circuit.

Both 919 Hybrids were a lap down after four hours of the race.

Tandy, Neel Jani and Andre Lotterer had the faster of the two Porsches in China, but an engine sensor issue in the opening hour resulted in more than a minute lost.

Lotterer, however, was only 20s behind Bernhard at the finish.

Repairs to the #7 Toyota cost it seven laps and left it down in fourth at the chequered flag.

Rebellion drivers Bruno Senna, Nicolas Prost and Julien Canal took victory in LMP2 to claim the championship lead with one race to go.

Senna had dominated the opening hour and a half of the race in the #13 ORECA-Gibson, but had to come from behind to take victory and the points lead from the #38 Jackie Chan DC Racing entry.

The Brazilian passed Ho-Pin Tung for the lead with just under an hour to go at the end of an eventful race for the Chan/DC car the Chinese driver shared with Oliver Jarvis and Thomas Laurent.

Tung had two incidents not of his making that resulted in spins, being tagged by Ben Hanley in the #24 Manor entry and then Muller in the G-Drive car

Tung dropped behind Nicolas Lapierre in the Alpine Signatech ORECA and then Nelson Piquet Jr in the second Rebellion entry, fourth place leaving the long-time championship leaders four points behind Senna and his team-mates.

Andy Priaulx and Harry Tincknell claimed GTE Pro honours after a prolonged battle with the #91 Porsche 911 RSR that Lietz shared with Frederic Makowiecki. 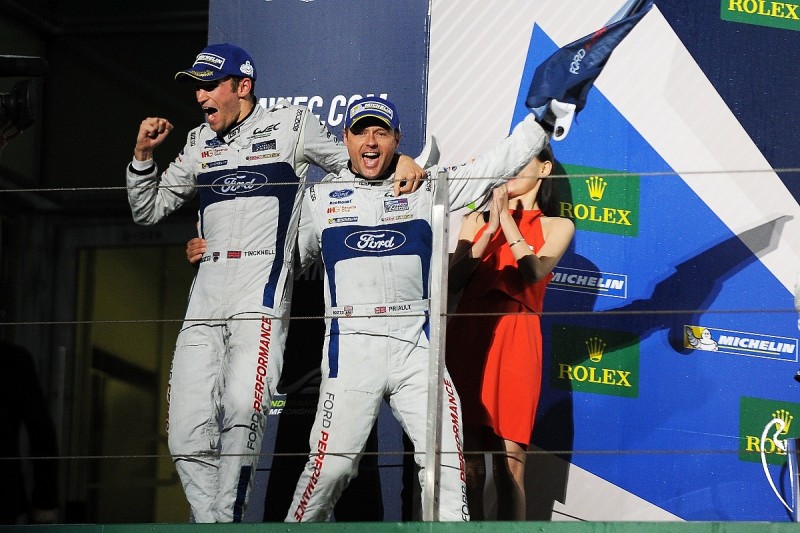 Priaulx was able to pass Frenchman Makowiecki for the lead in the fourth hour and then Tincknell fought a successful rearguard action against Lietz prior to his hit from Lopez.

The Porsche faded in the final laps after the contact, ending up nine seconds down at the finish.

Ferrari sealed the GT manufacturers' crown with third place for James Calado and Alessandro Pier Guidi and sixth for Sam Bird and Davide Rigon in the two AF Corse-run 488 GTEs.

Porsche looked on course for victory with the sister car driven by Kevin Estre and Michael Christensen.

They had a clear edge on both their team-mates and the rest of the field, only for engine issues to put the car out early in the third hour.

Aston Martin drivers Pedro Lamy, Mathias Lauda and Paul Dalla Lana had an easy run to victory in GTE Am from early in the second hour.

Their two closest rivals, the Spirit of Race and Clearwater Ferraris, lost time in the same incident involving the second of the Chan/DC ORECAs.