Toyota set the pace in both of Friday's free practice sessions for this weekend's Fuji World Endurance Championship round, amid numerous stoppages caused by loose kerbs

The opening session of the weekend was paused for 32 minutes while a kerb at Turn 15 was repaired, and around 50 minutes of track time was lost in the second session in two separate stoppages.

While the morning session was extended by half an hour to compensate for the lost track time, only 10 minutes was added to the afternoon's running as dusk fell.

The #8 Toyota TS050 HYBRID of Sebastien Buemi topped the opening session with a best time of 1m25.847s, which was blown away by Fernando Alonso in the opening minutes of second practice.

Alonso set a 1m23.973s, which was enough to beat Jose Maria Lopez in the sister #7 machine by over a second.

Rebellion was the quickest of the non-hybrid outfits, with the Silverstone race-winning #3 R-13-Gibson leading the charge in the hands of Thomas Laurent with a time 1.724 seconds off the pace of Alonso.

Jenson Button had led the privateer charge in first practice but slipped to fourth in the second session, lapping just a tenth slower than Laurent.

Fifth was the #1 Rebellion of Andre Lotterer, followed by the second of the SMP BR1s, the #17 of Matevos Isaakyan that slowly limped back to the pits in the dying stages of second practice.

The sister #11 car also appeared to suffer a brake issue while in Vitaly Petrov's hands during the first session. 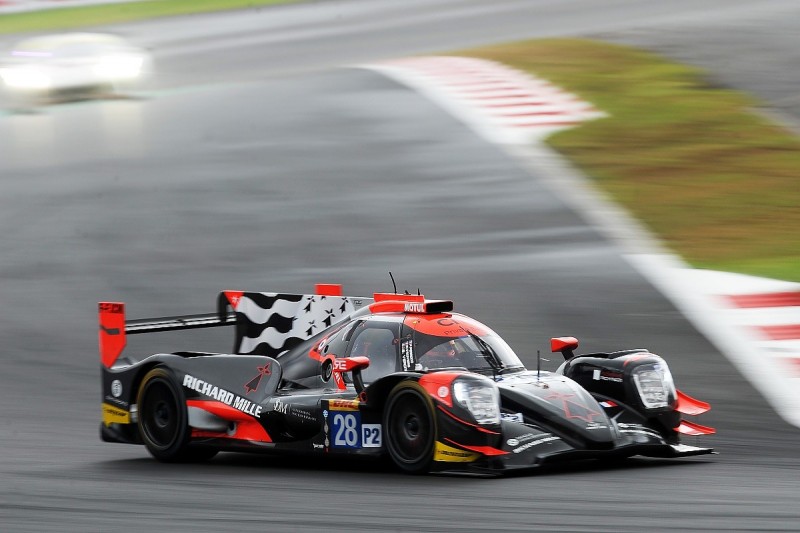 LMP2 was topped by TDS Racing, with Matthieu Vaxiviere setting the best time of 1m30.360s during FP1.

Signatech Alpine led FP2 courtesy of Andre Negrao's 1m30.893s in the #36 ORECA, which left the team second for the day ahead of the two Jota Sport-run Jackie Chan DC ORECAs.

Aston Martin topped the GTE Pro times courtesy of a late flyer in FP2 from Nicki Thiim in the #95 Vantage GTE.

Thiim set a 1m37.659s with less than 10 minutes remaining to depose Ford driver Harry Tincknell by a little under two tenths.

Ferrari made it three different makes in the top three, Davide Rigon leading its charge in the #71 488 GTE Evo, ahead of the two Porsche 911 RSRs and the #66 Ford GT that was fastest in FP1 thanks to Stefan Mucke.

Porsche topped the times in GTE Am, with Matteo Cairoli posting the class benchmark of 1m38.989s in the #88 Dempsey-Proton 911 RSR.