Sebastien Buemi, Anthony Davidson and Nicolas Lapierre took victory by a clear lap over the sister TS040 HYBRID shared by Alex Wurz, Kazuki Nakajima and Stephane Sarrazin at the end of a race that was red-flagged just under 30 minutes before its scheduled finish courtesy of heavy rain.

The #8 car triumphed courtesy of the decision to put it on intermediate tyres when light rain started to fall late in the opening hour of the six-hour event.

The #7, which had been ahead of its sister car when they pitted, was sent out on full wets, which proved to be the wrong decision.

Buemi said: "We are so delighted to finish first and second - what a great start.

"It was really tricky at the end; I think the race director made the correct decision to stop the race."

Porsche claimed a podium on its return to top-level sportscar racing with the 919 Hybrid.

Mark Webber, Timo Bernhard and Brendon Hartley took third, finishing two laps down on the winner and one down on the second-placed Toyota.

The car needed suspension repairs after Jani lost the left front wheel, and then slowed with an unspecified hydraulic problem soon after rejoining.

Audi had a day to forget: both its new R18 e-tron quattros retired after accidents.

Lucas di Grassi crashed at Woodcote in the light drizzle at the end of the opening hour when running third.

The Brazilian was able to get the car back to the pits, but damage to a front suspension pick-up prevented it from rejoining.

The #2 car had already lost time when Andre Lotterer spun at Stowe on the damp track and then Benoit Treluyer lost it at Copse and hit the inside barrier.

The Frenchman managed to get the car going, but with the front suspension severely damaged only managed to drive the car straight into deep gravel from which there was no way out. 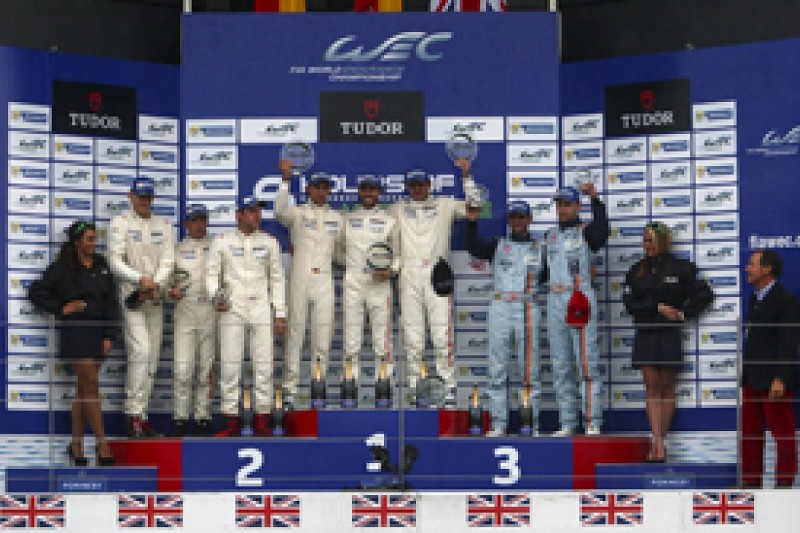 Pilet came in for the harder of the two Michelin wet-weather tyres, such were the conditions, and Makowiecki was due to follow him in but found the pits closed courtesy of the safety car.

It came back from a double early delay after losing time at scheduled pitstops to replace the nose section because a front headlight was out, getting on terms with the KCMG ORECA-Nissan 03 driven by Tsugio Matsuda, Matt Howson and Richard Bradley courtesy of the first safety car.

The KCMG car was delayed by a stop-go penalty for speeding in the pitlane and was also docked a lap for an unsafe release in the pits, which explained its two-lap deficit to the winner at the end.