Dixon walked away from the wreck at Indianapolis seemingly unscathed, but suffered a minor injury to his left ankle that required him to wear a walking boot and use crutches in the following days.

He competed in the IndyCar double-header at Detroit the next weekend - finishing second in the first round - but reported that the foot was painful while left-foot braking.

Returning to the cockpit of the Ford GT this week for the first time since the Sebring 12 Hours in March, Dixon found that the set-up of the car's pedal box exacerbated the pain from the injury.

"Detroit was pretty tough," he told Autosport, "being a double-header and straight after Indianapolis, and having to use the left foot, because it's only left-foot braking [in IndyCar].

"Here, actually, I can't use the left foot [to brake].

"It seems like the way the angle [of the foot] is, how it hits the pedal, seems to annoy it quite a lot, so I've had to go back to right-foot braking here.

"It's definitely been interesting - it's the first time in about 14 years." 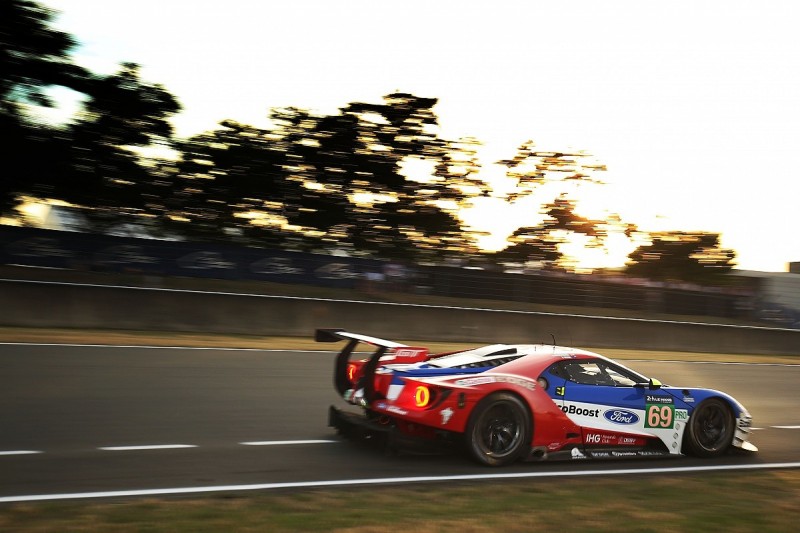 Despite having to adapt his driving style, Dixon was able to lap competitively during practice and qualifying for the 24 Hours, though it was team-mate Ryan Briscoe who put the #69 Ford fifth on the GTE Pro grid during a low-fuel qualifying run on Thursday night.

Until that point the Ford squad had been largely anonymous, a possible consequence of Balance of Performance changes under which it is carrying an additional 20kg and amended turbo settings compared with last year.

The #69 was also the fastest of the Fords on the test day at the beginning of June, but there its best time of 3m57.526s (set by Richard Westbrook) was 2.8 seconds off the class best.

"Pace-wise I was fine," says Dixon.

"I think I was quickest in the first session, out of our group, but it depends on tyres and conditions and a ton of things.

"We're obviously not where we want to be right now in terms of outright speed against the competition - it's tough.

"They [the ACO and the FIA, who formulate the Balance of Performance] seem to be quite obsessed with top speed, and we've got such a small, low-drag car, that when they add weight and take away our power, our acceleration is horrible.

"Even though our top speed is then comparable with the others, they've got a load more power.

"But Balance of Performance is a constantly moving target, especially with new cars coming, and it's always going to be difficult to balance small cars against tall ones."