Mark Webber, Timo Bernhard and Brendon Hartley took a third consecutive World Endurance Championship victory for Porsche at Austin on a day that Audi had the faster car

Audi dominated the early stages of the day-night race in the high temperatures that suited its R18 e-tron quattro, but a series of problems for both its cars ultimately handed victory to its German rival.

The winning Porsche 919 Hybrid crossed the line 23 seconds ahead of the #8 Audi shared by Loic Duval, Lucas di Grassi and Oliver Jarvis, who were hit by a series of delays.

Duval lost the lead and approximately 40s when the car suffered a temporary electrical shutdown just after the halfway mark of the six-hour race.

The Audi lost more time when it pitted under green flag conditions and the winning Porsche was able to make its pitstop during a full-course yellow virtual safety car.

Di Grassi would still have been favourite to overhaul the Porsche but for an extra stop after taking over the car with 90 minutes to go when he had to come back in to have a loose door closed.

The #7 Audi of Andre Lotterer, Marcel Fassler and Benoit Treluyer lost the lead to the Porsche on the four-hour mark when it also pitted under green flag running.

Treluyer was inching back towards race leader Bernhard when he was tagged as he went around the outside of Olivier Pla's Ganassi Ford GT in the downhill Turn 18 right-hander.

The Audi hit the barriers and, after repairs in the garage, finished eight laps down in sixth.

Bernhard said: "This is mega - it was a hard-earned victory.

"The Audis were a little bit quicker, but we kept going and came back after getting a bit lucky with the full-course yellow."

The Toyota TS050 HYRBID was competitive with the Porsche, if not the Audi, and two double stints on the tyres put Sarrazin in with an outside chance of victory in the final hour.

Championship leaders Neel Jani, Marc Lieb and Romain Dumas didn't have the speed of their team-mates in the sister car and ended up fourth.

The second Toyota took fifth position after hitting problems with a turbo wastegate early in the race, which left Sebastien Buemi, Anthony Davidson and Kazuki Nakajima two laps down in fifth. 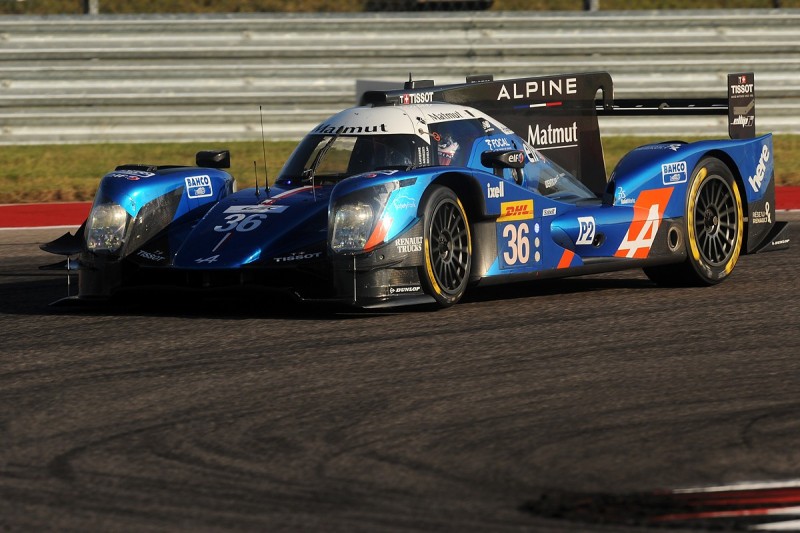 Their ORECA-Nissan 05 finished a lap up on its nearest rival in class courtesy after gaining time during the full-course yellows.

The RGR Sport Ligier-Nissan JSP2 took the runner-up spot with Bruno Senna, Filipe Albuquerque and Ricardo Gonzalez by 14s from the G-Drive ORECA of Rene Rast, Alex Brundle and Romain Rusinov, which was the big loser under the yellows.

The Danish duo dominated the class aboard the #95 Aston Martin Vantage GTE on the way to an 11s victory over the best of the AF Corse Ferrari 488 GTEs in the hands of Gianmaria Bruni and James Calado.

The Aston trio finished just over a minute ahead of the Proton-run KCMG Porsche of Wolf Henzler, Joel Camathias and Christian Ried despite a poor start by Lamy and a spin from Dalla Lana with just over an hour to go.