The German marque’s top car, the #92 of Christensen and Kevin Estre, finished a distant third in Sunday’s penultimate round of the season, 31.6s down on the winning Ferrari shared by Alessandro Pier Guidi and James Calado.

It leaves Christensen and Estre facing an 11-point deficit to Pier Guidi and Calado heading into the final round of the 2022 season at Bahrain, where extra points are on offer.

Although Christensen had managed to take pole, he admitted that from the outset Porsche was concerned at Ferrari’s long-run pace, as the 911 RSR-19 suffered worse with tyre degradation on what was an unusually hot day at Fuji.

“We could see Ferrari was strong in practice,” Christensen told Autosport post-race. “Pole was important in terms of points and our starting position, but we were still sceptical because we saw Ferrari were strong on the long runs.

“To be honest, it’s a disappointment when you feel like you have no chance. We did everything we could, we started on the soft tyres, like they were, but we had a massive drop while they were just able to continue.

“Whether that’s because they don’t have to push, I have no idea, but we were on the limit.”

On he and Estre’s championship chances, Christensen added: “Looking at our performance compared to them, it’s definitely not a pleasant situation. 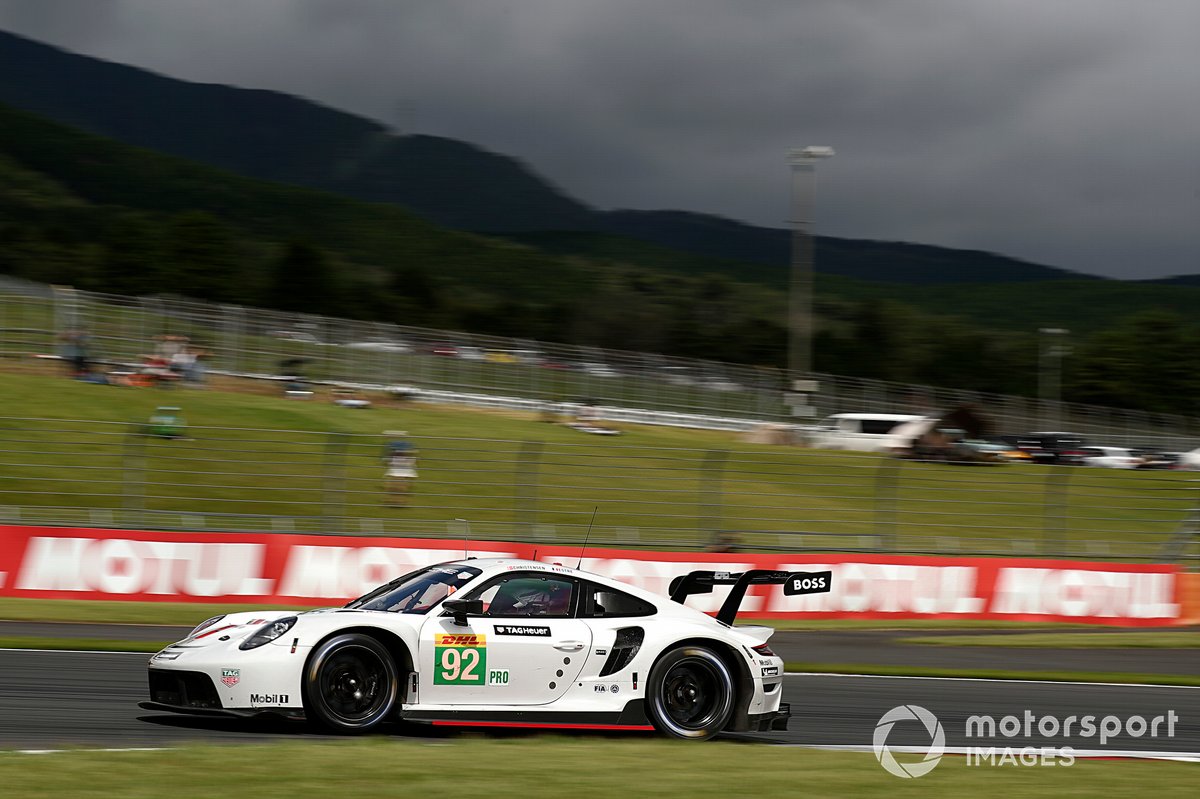 “We have to keep working and find where we can improve, then race as hard as we can and then hope some luck comes our way.

“I don’t expect any change in the performance for Bahrain, because we know they are good there. It’s hard to be optimistic at the moment.”

Pier Guidi and Calado came away with their second win of the 2022 season, leading a Ferrari 1-2 ahead of the sister entry shared by Miguel Molina and Antonio Fuoco.

That was despite Calado briefly losing the advantage to Estre during the opening stint before he repassed to take a lead that the #51 car would maintain until a late battle with the #52 Ferrari in which the two Italian cars temporarily swapped places.

Recalling the early stages of the race, Calado said: “I got a good start, Kevin just forgot to put the throttle on and left a massive gap and I took advantage of that and led for a few laps. He was noticeably a bit quicker and I was trying to manage the tyres because I knew it would be difficult judging by testing because we had quite high tyre degradation.

“I was managing [the tyres] a lot, so I got passed by him [Estre], but then he started to struggle straight after that. I tried to pounce back again and made a nice move at Turn 1, and after that we managed to stay in the lead for most of the race.”

Pier Guidi added: “The car was performing well and we did a great job as a team. We did a good choice in terms of tyres, we were really consistent in our stints, that was the key.”