Kobayashi took over from Mike Conway midway through the 20th hour as Sebastien Buemi did the honours in the #8 Toyota.

The gap is now 1m58s between the Toyotas and the two cars are five laps ahead of the leading privateer.

That privateer battle has been affected by a string of errors and reliability problems throughout the race, with the latest issue hitting the #3 Rebellion-Gibson R-13 of Nathanael Berthon and consigning him to the garage for nine minutes.

The #3 Rebellion's extended pit stay means the SMP Racing BRE-AER BR1 of Mikhail Aleshin is running in a comfortable third place and three laps up on the #1 Rebellion.

Berthon rejoined behind Andre Lotterer and the LMP2 leading Signatech-Alpine entry that is now running in fifth overall.

Following the problems for G-Drive in the 19th hour, Signatech-Alpine's Nicolas Lapierre continued to manage a one lap lead in LMP2 with four hours to go.

His nearest rival is Stephane Richelmi in the #38 Jackie Chan DC Racing ORECA, which took a new nose section at the top of the hour when Richelmi took over from Ho-Pin Tung.

The #28 TDS Racing ORECA remained, with gentleman driver Francois Perrodo back behind the wheel, around 65 seconds adrift of Richelmi at the end of the hour.

Richelmi had been only 18s ahead of Perrodo's team-mate Loic Duval before their last round of pitstops, although that gap will continue to grow as Perrodo sees out his minimum driving time.

Romain Dumas headed the battle for fourth at the end of the hour, but was due a pitstop in his Duqueine Engineering ORECA that has run well since losing two laps in the first hour.

Dumas was 20s ahead of Filipe Albuquerque's #22 United Autosports Ligier, with Paul-Loup Chatin a further minute behind in the #48 IDEC Sport ORECA. 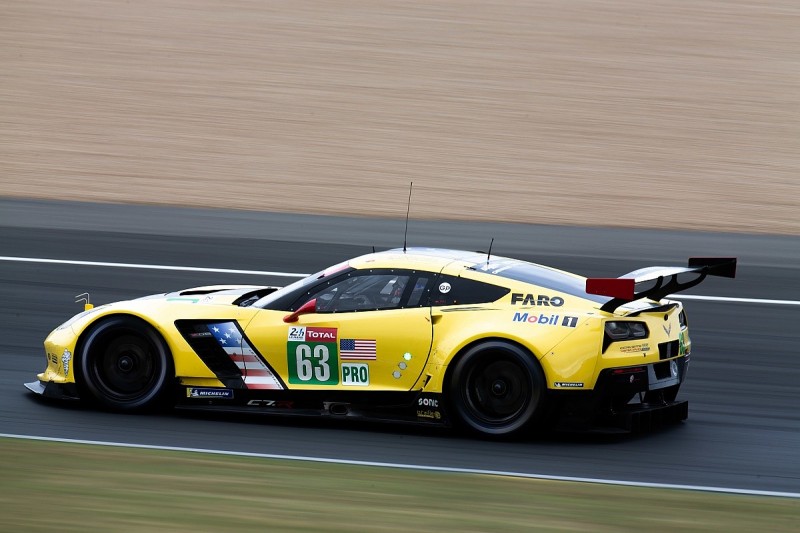 Corvette held the upper hand in its fight with Ferrari as the 20-hour mark came and went, with Antonio Garcia holding a lead of around 10s over James Calado.

The two cars continue to run on divergent pit schedules, with Calado taking over from Alessandro Pier Guidi and holding a 35s buffer over Gianmaria Bruni's #91 Porsche.

Currently fourth is the #93 Porsche, now in the hands of Nick Tandy and 15s down on Bruni, while Fords fill out places five through eight, Andy Priaulx leading the Blue Oval charge in the #67 machine.

Ford remains firmly on course for GTE Am honours with the privateer Keating Motorsports entry, which is still more than three minutes ahead of its nearest rivals in Felipe Fraga's hands.

Egidio Perfetti had the Project 1 Porsche a little over a minute ahead of the JMW Motorsport Ferrari of Wei Lu at the 20-hour mark.