The new-for-2020 Hyperpole shootout gave the fastest six cars in each class during Thursday's first qualifying session a chance to fight for pole in a condensed 30-minute session on Friday morning.

Rebellion returned fire by virtue of a stellar 3m15.822s from Gustavo Menezes in the #1 Rebellion R-13, the fastest ever lap around the Circuit de la Sarthe for a privateer and a non-hybrid car.

That prompted lap record holder Kobayashi to respond with an even quicker lap, posting a 3m15.267 on his next attempt. Nakajima also improved, but stayed third with a 3m16.649, ahead of the second Rebellion of Louis Deletraz.

Tom Dillmann's #4 ByKolles machine brought up the rear of the LMP1 field, the ENSO CLM P1/01 barely ahead of the LMP2 runners, 7.77s off Kobayashi's benchmark.

Paul di Resta secured pole in LMP2 aboard the #22 United Autosports ORECA, setting the pace early on with a 3m24.528s.

The Scot was three tenths quicker than Jean-Eric Vergne in the #26 G-Drive ORECA, with Will Stevens initially third and the best of the Goodyear-shod cars in the #37 Jackie Chan DC Racing ORECA.

Toyota protege Kenta Yamashita briefly took third away from Stevens in the #33 High Class ORECA, only to then be demoted himself by a late effort from Nyck de Vries in the #29 Racing Team Nederland ORECA.

Mercedes Formula E racer De Vries had survived an early scare in the Porsche Curves, going straight on into the gravel trap but narrowly avoiding the barriers on his wait out. 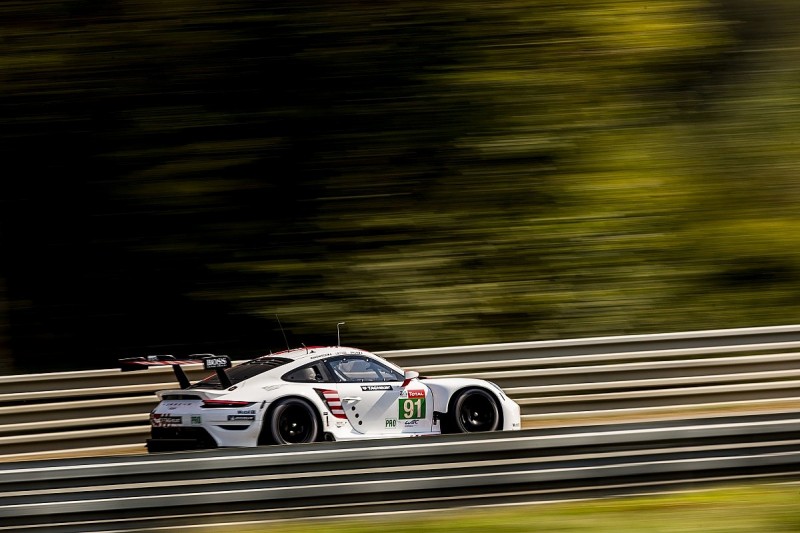 Sorensen took third in the #95 Aston ahead of team-mate Alex Lynn, with Bird shuffled back to fifth ahead of the second Porsche of Michael Christensen, who finished the session 0.9s adrift of his team-mate.

In GTE Am, Campbell's early effort was eventually bettered by Come Ledogar in the #61 Luzich Ferrari, the Frenchman posting a 3m51.266s good enough for fourth overall among the GT field.

Campbell was just half a tenths slower in second, as Matteo Cairoli's #56 Team Project 1 Porsche beat the #98 Aston Martin of Ross Gunn to fourth place.