Mike Simpson revealed that his lap aboard the #6 Team LNT Ginetta-AER G60-LT-P1, which stood as the fastest privateer time in qualifying, was comprised after the rush to change the turbo powerplant.

The quick engine swap resulted in a number of electrical glitches, including failing power steering that resulted in Charlie Robertson spinning.

He was unable to restart the car and did not complete a flying lap.

"I think we had the pace to challenge the second Toyota for a place on the front row," Simpson told Autosport.

"Considering that we had a series of issues, I think we showed good performance.

"We've unlocked a bit more in the car, and if Charlie had managed a lap, there was a chance that we could have got ahead of the #7 Toyota."

Because Robertson did not complete a lap, the #6 Ginetta would have started from the back of the five-car LMP1 field.

But the car, which Guy Smith shares with Simpson and Robertson, was excluded from qualifying for two technical infringements uncovered in scrutineering.

The external marshals' switch that puts the car into neutral and the quick release system on both doors was not operational.

The #6 Ginetta will have to start from the pitlane after the rest of the field has completed one racing lap.

Simpson posted a 1m25.889s lap, which was only two tenths slower than Jose Maria Lopez managed in the #7 Toyota TS050 HYBRID that took second on the grid behind its sister car.

The #6 Ginetta, which is unpenalised at Fuji under the new system of success handicaps in LMP1, was just under a tenth quicker than the fastest lap for the solo Rebellion-Gibson R-13 set by Norman Nato.

Simpson explained that he had initially heading into the pits as he began what turned out to be his fastest lap.

"There was an issue that turned out to be just a sensor, so the team told me to abort the pitstop because were running out of time," said Simpson.

Simpson revealed that the Ginetta's traction control was not working and that the power steering issue that caused Robertson to spin was already manifesting itself during his lap.

He paid tribute to the LNT squad for completing the engine change in approximately one hour after data revealed higher water consumption during final free practice.

"It was an impressive effort from the team to get the car out there even if there were a few electrical glitches," he said.

"The guys have never had to change an engine in such a short time before." 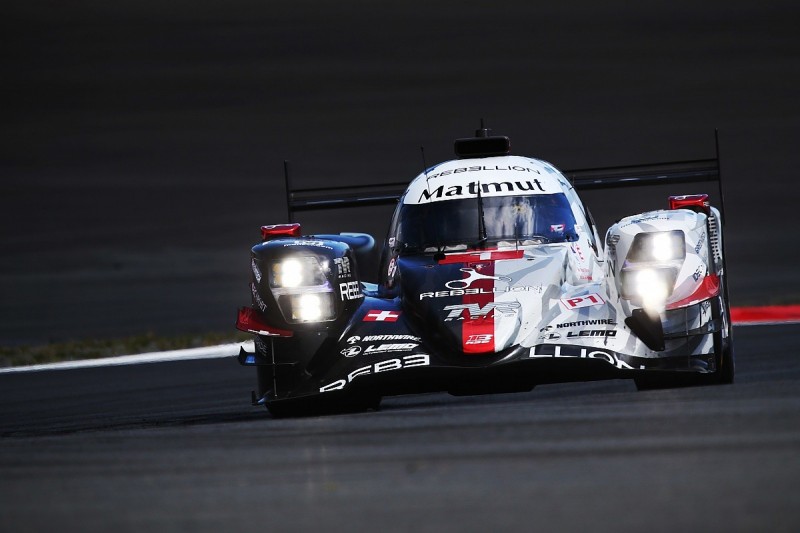 The Rebellion R-13 shared by Gustavo Menezes and Norman Nato only managed an average time of 1m26.163s during Saturday afternoon's pole shootout, leaving them 1.150s down on the #8 Toyota TS050 Hybrid of Hartley and Kazuki Nakajima.

It was also almost two seconds slower than the 1m24.359s average time set by the quickest Rebellion during qualifying for last year's Fuji round.

Ex-Formula 1 driver Hartley admitted that based on Rebellion's 2018 times he was heading into qualifying unsure whether either of the Toyotas would take pole.

"We still had quite a decent margin, which was a surprise," said Hartley.

"We thought particularly the Rebellion would be a lot closer with the new success ballast, considering the lap times they did last year.

"It was a surprise that today was not more of a fight. Our car is 50kg heavier than last year, we are definitely a lot slower.

"Honestly, we weren't sure if they were hiding performance, particularly when you look at last year."

Lopez echoed Hartley's comments, highlighting that the Rebellion was not significantly penalised under the new championship points-based LMP1 handicap system that is being implemented for the first time this weekend.

By contrast, the Silverstone-winning #7 Toyota and the sister #8 car have been slowed to the tune of 1.4s and 1s per lap respectively at Fuji.

"What is strange is we keep getting slower every race, but somehow the Rebellion is two seconds slower than last year, with a better car," Lopez told Autosport.

"Our car is much heavier, it is 1.4s slower than Silverstone. If you look at the lap times, the LMP2 are the same or even faster this year, and the Rebellion is two seconds slower than last year.

"It's difficult to know what they are doing."

Asked to explain why Rebellion was so much slower this year, Menezes pointed to the cooler temperatures of 2018 and the R-13 suffering from a general lack of grip.

"We know this track doesn't suit our car and that already makes it difficult," Menezes told Autosport.

"Obviously the EoT did slow [Toyota] down, you can see in comparison with the lap times from last year.

"But it's hard to compare because last year it was 20 degrees colder. On this track the tyres were well over the edge of the window, especially for a rear-wheel drive car.

"For sure we hoped to be closer, but there's nothing we can do. And with Toyota, it's hard to know where they are until qualifying. They are the king of playing games.

"It doesn't mean they don't deserve to be where they are, but it's hard to judge."