Calado and Alessandro Pier Guidi were the manufacturer's top representatives in Japan, the pair fighting back from an early puncture to claim fourth in the GTE Pro class in the #51 Ferrari.

The sister #71 488 GTE Evo of Sam Bird and Davide Rigon was in a strong position out front before contact with the DragonSpeed LMP2 car consigned it to the garage in the penultimate hour.

"It was a race that was taken away from us really," Calado told Autosport.

"I felt gutted because I knew it was the opposite to Silverstone [where Calado said Ferrari required more Balance of Performance help after winning on "strategy"]; I knew we had the pace to win.

"I got a good start, got up to third, I was just chilling out, relaxing, waiting for the track to dry, which it did. But just before that point I got a front-left puncture.

"Luckily it was in the last sector, but then the safety car came out which really screwed us over, because we had to wait in the pitlane for the green light.

"Then it was qualifying laps for four hours - flat out, as fast as we could go. It's a shame, because we should have been one-two, in either order.

"I think it was one of the best races I've ever done, had a great few battles with Ford and Porsche. I'm pleased with myself, there's a lot of positives to take to China."

Asked for his thoughts on the revised BoP for the Fuji round, which did not affect Ferrari but did slow down Ford and Porsche, he said: "It's better, but we're still not quick enough on the straights. 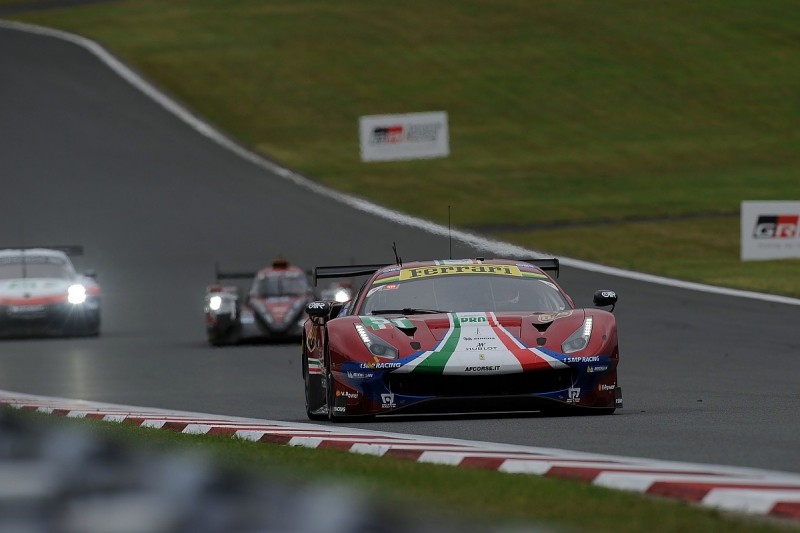 "We'll probably get a little penalty in Shanghai, maybe 5kg or 6kg more weight [relative to the others], due to our speed in the race.

"But we'd rather have the [extra] weight than having less power."

It means the pair are now 31 points clear of Ford pair Olivier Pla and Stefan Mucke at the halfway point of the season, while Calado and Pier Guidi are 40.5 adrift in third.

"It's still possible [to win the title], of course," Calado added.

"Ideally we needed to win this weekend, and that would have been a lot more comfortable than the position we are [in] now.

"It's going to be difficult but sometimes that's the way it is. People know we're quick, they [Estre and Christensen] have been lucky up to now but they've also done a good job."