At the second of many restarts, the only other P1 car - the Dyson Racing Lola - was adjudged to have jumped the start.

The subsequent penalty should have made the result a foregone conclusion given the limited amount of racing laps, but a mysterious late problem for Lucas Luhr meant Guy Smith found himself in the lead with under 20 minutes to go.

But the HPD had been quicker than the Lola all weekend, and eventually Luhr retook the lead. Smith did not let him get away, though, and with damage to its rear bodywork the Pickett car struggled to the finish.

The race had been only seconds old when it was stopped. Level 5's Scott Tucker was pushed into a spin by Anthony Lazzaro's Extreme Speed Motorsports HPD. With the whole pack heading towards him, chaos erupted.

After a wait of over an hour, the restart was a damp squib as the cars failed to line up correctly and it was waved off.

The race then finally burst into action, especially in the GT category where the BMWs and Corvettes were staging a great fight.

Tommy Milner had worked his way around Maxime Martin's Z4 and Jan Magnussen had done the same. But the Belgian had sustained damage to the rear of his RLL entry along the way, and finally the flailing bumper fell off causing yet another full-course caution.

The restart proved crucial. On cold tyres Extreme Speed Motorsport's Scott Sharp misjudged the chicane and whacked the tyres. This forced the following Dirk Muller to lift off and allowed both Corvettes to pounce, with Magnussen taking full advantage to get team-mate Milner in the process. 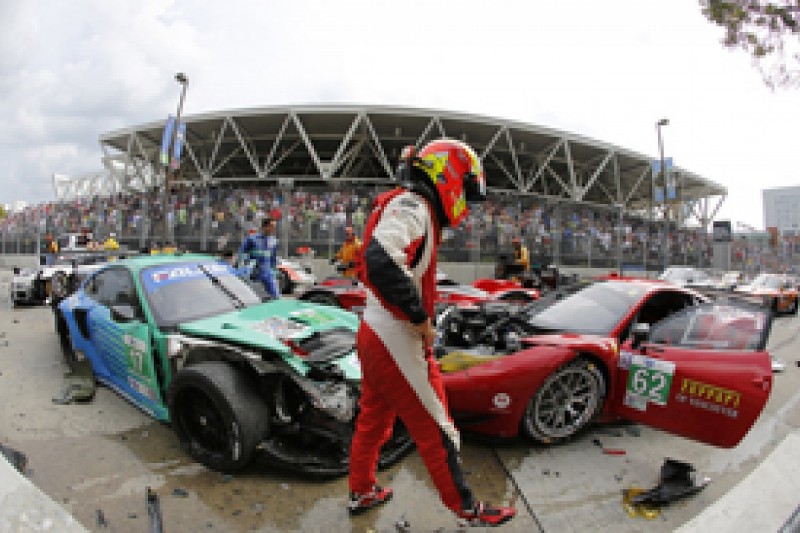 The LMP2 cars were in the wars throughout, and by dint of having fewer issues victory fell to Marino Franchitti and Guy Cosmo for Level 5 Motorsport.

The same could be said for LMPC, where Colin Braun and Jonathan Bennett lost an easy win when they were forced to make a late stop as the latter had not done enough laps.

This set up a great fight between Dane Cameron and Tristan Nunez, which was settled when Cameron's suspension broke with less than 90 seconds to go.

There was a terrific late duel for GTC honours. Dion von Moltke had a clear lead, but Jeroen Bleekemolen, Jan Heylen, Andy Lally and Sean Edwards waged an epic war for second.