The latest car to carry the R18 e-tron quattro name is an evolution of last year's Le Mans 24 Hours winner, but Audi has "dug deep into areas of development that showed potential", according to its head of LMP1 Christopher Reinke.

"Every bit of carbon except for the monocoque and the gearbox casing is new," he said.

"The structural spine of the car is the same, so it is an evolutionary step that builds on the potential that we saw last year.

"I honestly believe - and it is more than a hope - that we have addressed thoroughly the weaknesses of the car and therefore we will be much stronger generally."

The new car, which has so far run in the high-downforce specification in which it will start the WEC season, looks significantly different to its predecessor.

It has a new nose, which has resulted in the car having to undergo another crash test, and runs a long tail courtesy of a regulation change that demands the rear crash structure has to be covered by bodywork.

Andre Lotterer described the new R18 as a "a good step over last year's car".

"No one has been sleeping in any department; the new car feels good so far," he said.

The first 2015-spec R18, running in a carbon test livery, undertook its second test last week at Sebring, completing more than 6000km over the course of five days.

Audi's six full-season WEC drivers and the trio who will race the additional R18 at Le Mans and the Spa WEC round were all present.

Audi has yet to reveal details of its hybrid system and in which megajoule class it will run.

Last year's R18 ran in the 2MJ class, which compared with 6MJs for rivals Toyota and Porsche, and Audi is known to be aiming to move up a class for 2015. 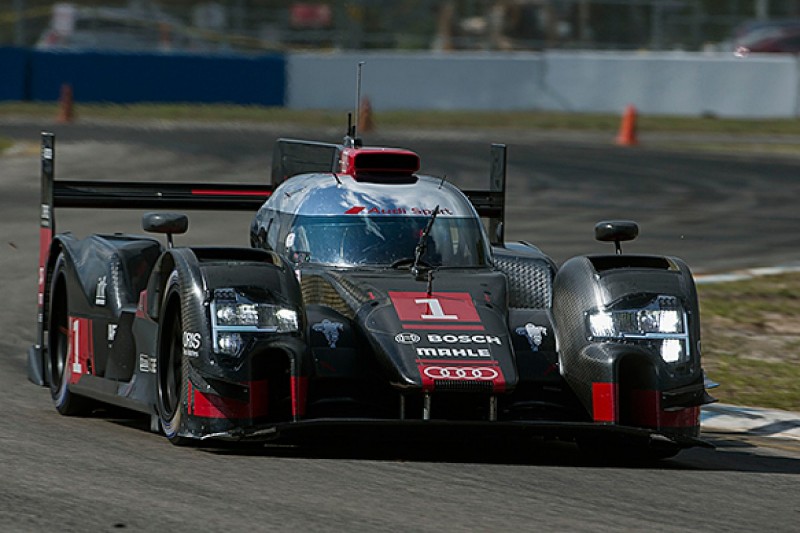