Alpine driver Nicolas Lapierre says he is disappointed to finish so far behind Toyota in last weekend’s Fuji World Endurance Championship event, even if the team hit its pre-event target.

On the WEC’s first visit to Japan since 2019, Toyota’s pair of GR010 HYBRIDs were a cut above the opposition, finishing two laps ahead of the Alpine A480-Gibson shared by Lapierre, Andre Negrao and Matthieu Vaxiviere.

Alpine’s grandfathered LMP1 car had taken a Balance of Performance hit, which led Negrao to conclude after Friday practice that the team had no hope of challenging Toyota and that third would be a satisfactory result in the circumstances.

While that target was achieved, despite an early tussle with Peugeot, Lapierre couldn’t hide his frustration at Alpine’s powerlessness to offer even a remote challenge to Toyota in what turned out to be a rare caution-free race.

Analysis: The Toyota domination on home turf that sets up a WEC title showdown

“The result we expected, but it wasn’t the gap we expected - we’re a bit disappointed to be so far away,” Lapierre told Autosport.

“Two laps is quite a lot for a six-hour race.

“We didn’t have much to do in terms of strategy because nothing happened [with caution periods] and we were much shorter on fuel than Toyota, so there were not many windows open for us.

“We just tried to survive and do some damage limitation for the championship.”

Toyota Gazoo Racing Europe technical director Pascal Vasselon admitted that the two-lap margin over Alpine at the end of the Fuji race exceeded the marque’s expectations.

However, he said the real pace of both the Alpine and the Peugeot 9X8, which was delayed by oil leak issues on both cars, was more impressive than it appeared on paper. 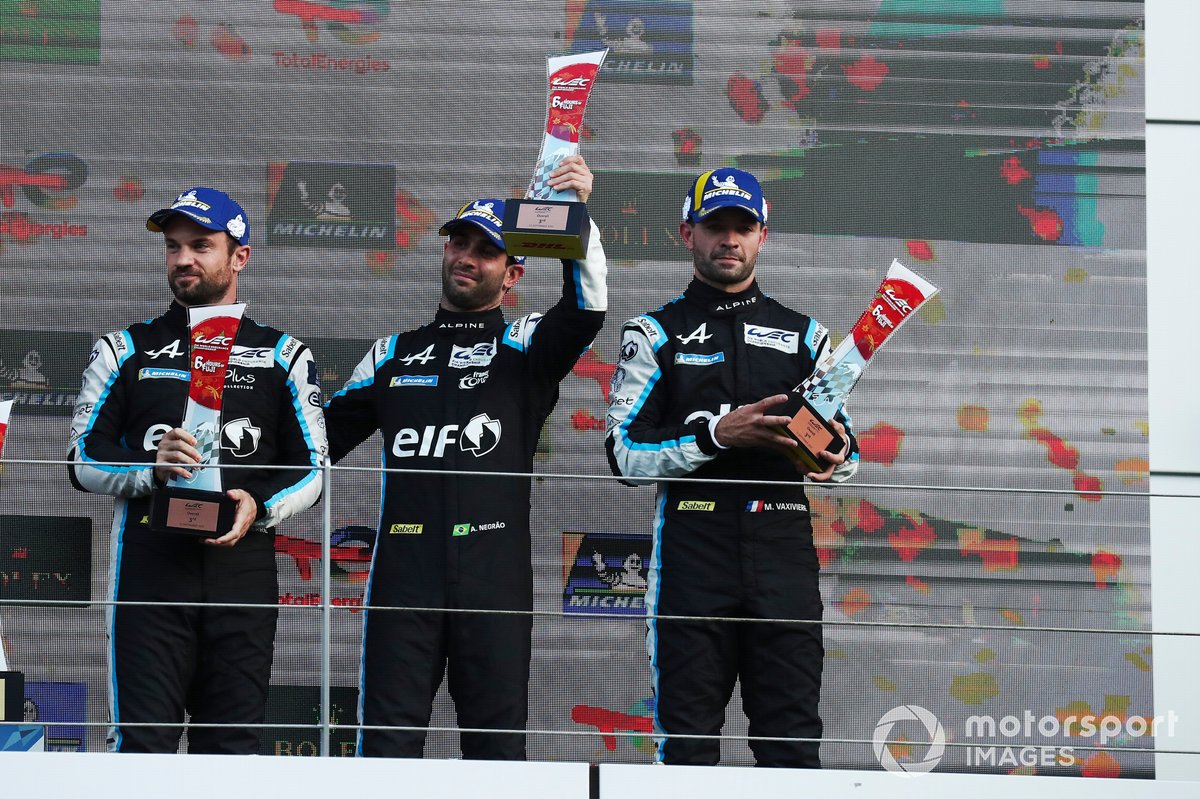 “The BoP is managing the pure performance, and in this sense all cars were pretty close together,” Vasselon said.

“The other thing we did is ensure we made one stop less, which we anticipated from the beginning. We made sure we would do six stints exactly and this paid off as well.”

Third place for Alpine means Lapierre, Negrao and Vaxiviere head to the season finale in Bahrain in November level on points with Toyota drivers Sebastien Buemi, Brendon Hartley and Ryo Hirakawa at the head of the standings.

Lapierre called Toyota the “favourite” for the eight-hour race but vowed to push to the end despite the disappointment of Fuji.

“Bahrain is a track that will suit Toyota because there are a lot of long straights, but it’s still open,” said the Frenchman. “As long as we still have a chance we’ll give everything.

“We know Toyota is the favourite, as they have been for the whole season, but we have a chance, we are level on points, so we’ll try and fight for it.”