Toyota claimed its first World Endurance Championship victory of the season in a full-distance race in Bahrain.

The Japanese manufacturer followed up on its win the rain-shorted Fuji round in October with a victory in the season finale for Sebastien Buemi, Stephane Sarrazin and Anthony Davidson.

Toyota was never headed over the course of the Bahrain 6 Hours and the winning TS030 HYBRID crossed the line 70s ahead of the second-placed Audi R18 e-tron quattro shared by Benoit Treluyer, Marcel Fassler and Andre Lotterer.

Buemi, who had to contend with a vibration during the final stages of the event, said: "We are delighted. We came into the season expecting more victories, but we only got one and a half, so it is good to end the season on a high."

The winning Toyota took the lead from its sister car, which was shared by Nicolas Lapierre, Alex Wurz and Kazuki Nakajima, early in the second hour when the first-named was at the wheel.

Sarrazin and Wurz, who took over the two TS030s at the second round of stops, were separated by just half a second when the chasing car pulled off the circuit with engine failure late in the second hour.

That left Loic Duval approximately 15s behind Sarrazin, which remained more or less constant before the Audi stopped out on the track when the car lost drive shortly before the halfway mark.

Fassler took up the chase of the remaining Toyota, but an attempt to double stint the Audi's tyres resulted in the Swiss driver's deficit to the leader nearly doubling.

A drive-through penalty for overtaking under yellow flags subsequently ended the challenge of Fassler and his team-mates.

Their G-Drive/Delta-ADR ORECA-Nissan 03 could not match the similar car of AF/Pecom early on, but was already established in the lead when their rival hit problems.

Fourth place for the OAK Racing Morgan-Nissan LMP2 shared by Bertrand Baguette, Martin Plowman and Ricardo Gonzalez was enough to win them the FIA Endurance Trophy for LMP2 drivers. 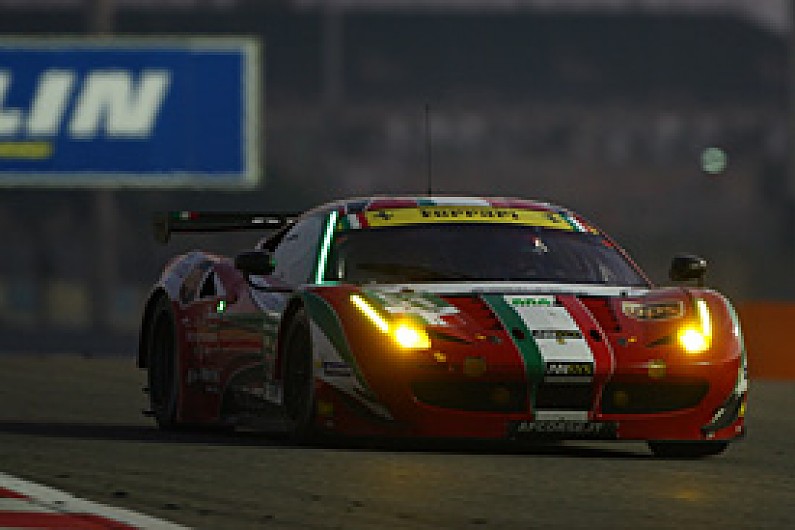 The Italian, who was split from season-long team-mate Giancarolo Fisichella for this race, was on course for the title when the Aston Martin Vantage GTE of erstwhile championship leaders Darren Turner and Stefan Mucke retired in the fourth hour with engine failure.

Aston Martin did, however, take class victory and the drivers' title in GTE Am.

Nicki Thiim, Christoffer Nygaard and Kristian Poulsen took a third win of the season, but fifth position gave Jamie Campbell-Walter and Stuart Hall, who were rejoined by car owner Roald Goethe for this race, the end-of-season crown.

8Star Motorsports won the teams' title in GTE Am courtesy of second place in class for Davide Rigon, Rui Aguas and Enzo Potolicchio.