The British marque has enjoyed a solid run of top-eight Superbike results at the TT in recent years with the likes of David Johnson and Josh Brookes, but endured a nightmare event this year with 23-time winner John McGuinness.

McGuinness - returning after a two-year absence through injury suffered at the North West 200 - failed to finish the SBK and Senior races on the SG8, and the Lightweight contest on the 650 Superlight, due to mechanical issues.

Hickman finished eighth on the Norton in the LTW race, but won three races in 2019 with the Smiths team aboard BMW and Triumph machinery.

Garner told Autosport Hickman has "raised the bar" at the TT due to his exploits in British Superbikes, and admitted Norton needs one of the "two or three" riders who have established themselves as the trailblazers.

"When you see Dean Harrison, Peter Hickman sliding the bikes at 140mph, 150mph you need to be so well-tuned in with your bike to do that with the road at the TT," said Garner.

"You need to be riding all the time, and I don't think it needs to be particularly BSB, or wherever, but you just need to be on the bike all the time.

After the TT, McGuinness said he would be requesting a more in-depth testing programme with Norton amongst other changes in approach during a debrief of the 2018 event.

Garner agreed this is something being looked at, but does not believe McGuinness is in a position physically at the moment to do so.

"John's not been in the position where he's been fit and putting in the training and bike fitness to do the test programme."

While Garner refused to comment on fielding a second Superbike or what names Norton would be interested in, his remarks hint towards a future without McGuinness aboard its SBK. 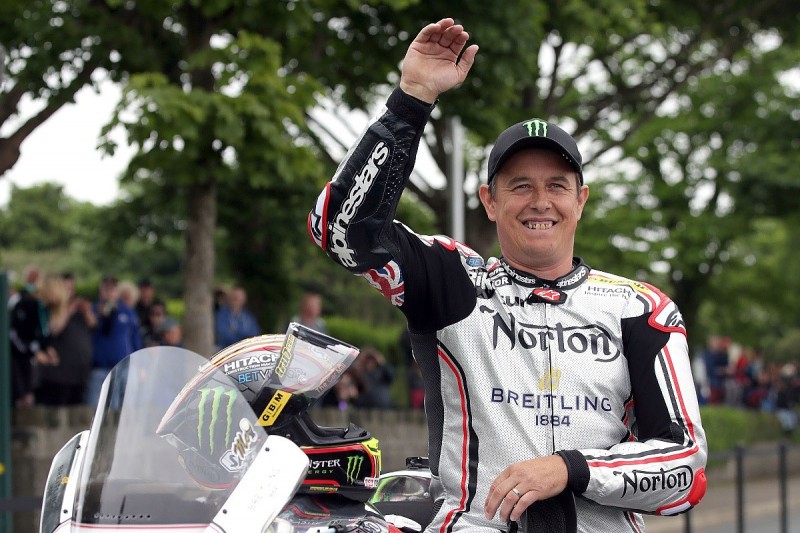 Autosport sat down with McGuinness at the Goodwood Festival of Speed to discuss his plans, and he too suggested - that while he is "committed" to the team for now - he won't be returning to SBK competition on the roads with Norton.

"My deal's with Norton for a bit longer now, so I've just got to get my head down with the guys and make a plan really," he said.

"I'll do something, definitely do something with them. I've committed. When I had my cage on at 45 years old, they were there for me, they put a package together for me.

"So I'll stand on and do my side of it. But it's just... there's no magic wand. I just wanted it to be better and it wasn't, and I got to stand on the podium for the 47th time on the electric bike, which was great.

"I wanted to stand on the podium with the Norton, but it wasn't to be. But to get there was a win for me."

McGuinness admits the pace of the likes of Hickman at the TT now is perhaps out of his reach, but is adamant he is still capable of podiums in the big bike class based on his lap times from previous TTs.

The SG8 is a strong package, and surely with its own 1200cc engine it could be in a position to secure a podium. But it was banned at the North West 200 and TT this year, and that is unlikely to change in the future as the regulations stipulate four-stroke four cylinder machines are limited to 1000cc engine capacity.

Organisers at both events can grant special dispensation for machines, which has been exercised in recent years for the likes of the MotoGP replica Honda RC213V-S and the Suter MMX 500cc two-stroke bike.

However, these exotic machines are rare and only the RCV is legal for the roads - and not in the trackday trim raced at the TT.

Garner believes the 1000cc engine has gone as far as it can, and is wary of detracting development focus from Norton's prime directive of building road bikes. So, it could be stuck with running the Aprilia unit it has done in its race bike.

With the new BMW and updated Kawasaki the reference SBK machines at the TT, a rumoured all-new bike from Honda and the untapped potential of the new Ducati V4 R, Norton's chances of success don't look strong going forward.

While Norton's 2020 plans remain uncertain for now, one thing is clear: 47-year-old McGuinness isn't finished yet.

"The fire's kindling away again," he said. "So we'll see what happens."

Dunlop "back on my feet" after Superbike Southern 100 smash