The first Supersport race of the week opened up Monday's programme, with practice pacesetter Dunlop and Dean Harrison resuming their battle from Saturday's Superbike TT.

Harrison seized the lead in the early stages on the opening lap on his Silicone Engineering Kawasaki, although Dunlop wiped out a one-second advantage to go nine tenths clear at the Ramsey Hairpin and proceeded to increase that gap to 1.7 seconds by the end of the tour.

JG Speedfit Kawasaki's James Hillier held third at Ballaugh, but Hickman managed to get his Trooper Beer Triumph 2.5s in front for the final rostrum spot as they began the second lap.

Dunlop stretched his lead out to six seconds on lap two, setting a new SSP lap record of 17m31.328s at 129.197mph, and lost very little time during the pitstop phase despite having the rear tyre on his MD Racing Honda changed.

By Glen Helen on the third lap, Dunlop was nine seconds in front, and he shadowed Harrison on the road to keep that gap hovering around the 10s mark through to the end to tally up his 17th TT.

Dunlop's second victory of the 2018 event puts him joint third with Sidecar legend Dave Molyneux on the all-time winners list.

Harrison made up for the disappointment of his clutch-induced retirement in the Superbike race with second in the SSP event, with Hickman responding to an attack from Hillier on lap three to claim third. 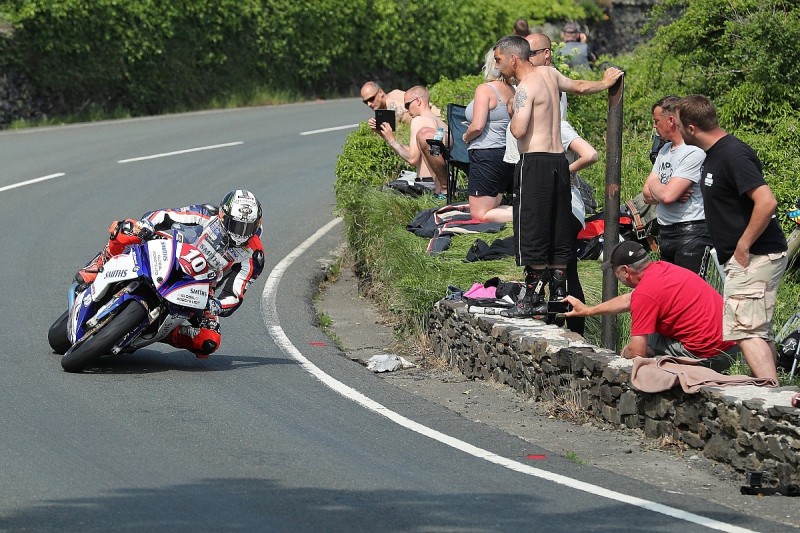 The top three in the Supersport race also battled for victory in a thrilling four-lap Superstock outing on Monday afternoon.

Harrison led Dunlop by 4.3s at the end of the opening lap, while Hickman usurped Michael Rutter for third having started the race down in eighth after running on at Braddan Bridge on the run to Glen Helen.

Hickman dug deep on lap two to overhaul Harrison and Dunlop, taking a 1.2s lead into the pitstop phase at the end of lap two after setting a stunning class record lap of 134.077mph in 16m53.059s on his Smiths BMW.

A slow stop allowed Dunlop and Harrison back ahead at Glen Helen on lap three, but Hickman took the lead once more into the closing part of the lap, though only by 0.5s.

Dunlop cut Hickman's advantage down to just a tenth at Ramsey, but Hickman re-established his lead and stretched four seconds clear across the rest of a lap to blast his earlier class record of 16m50.601s at 134.403mph to take his maiden TT win.

Harrison got his Kawasaki across the line nine seconds back from Dunlop in third, while David Johnson guided the Gulf BMW into fourth ahead of Hillier and Bathams BMW's Rutter.

Monday's races were marred by the death of newcomer Adam Lyon, who lost his life in an incident on the third lap of the Supersport race.

Isle of Man TT legend John McGuinness made his debut in the Ginetta GT Academy at Brands Hatch last weekend, taking a class win and is not ruling out a return.