The ARTA Honda squad scored a second victory of the Super GT season at Motegi, after the leading Impul Nissan dramatically ran out of fuel on the final lap.

The #12 Impul GT-R shared by Nobuharu Matsushita and Kazuki Hiramine seemed well set for its second victory of 2021, after Matsushita fought his way to the front from fourth on the grid during the opening stint.

Hiramine took over for the second stint, but came under increasing pressure from the ARTA Honda of Tomoki Nojiri as the 63-lap contest neared its conclusion.

Just as Hiramine looked like he had done enough to replicate his and Matsushita's win from Sugo in September, he lost momentum exiting Turn 2 on the final lap, allowing newly-crowned Super Formula champion Nojiri through into the lead.

From there the way was clear for Nojiri to bring home the #8 ARTA Honda NSX-GT he shares with Nirei Fukuzumi for a second win in a row, vaulting the pair up to second in the drivers' standings.

With the #1 Kunimitsu Honda of Naoki Yamamoto and Tadasuke Makino failing to score, Nojiri and Fukuzumi head to the final round of the season at Fuji Speedway five points adrift of Yamamoto.

Hiramine limped across the line in third, dropping behind the pole-sitting Racing Project Bandoh Toyota GR Supra of Ritomo Miyata and Yuji Kunimoto in the process. 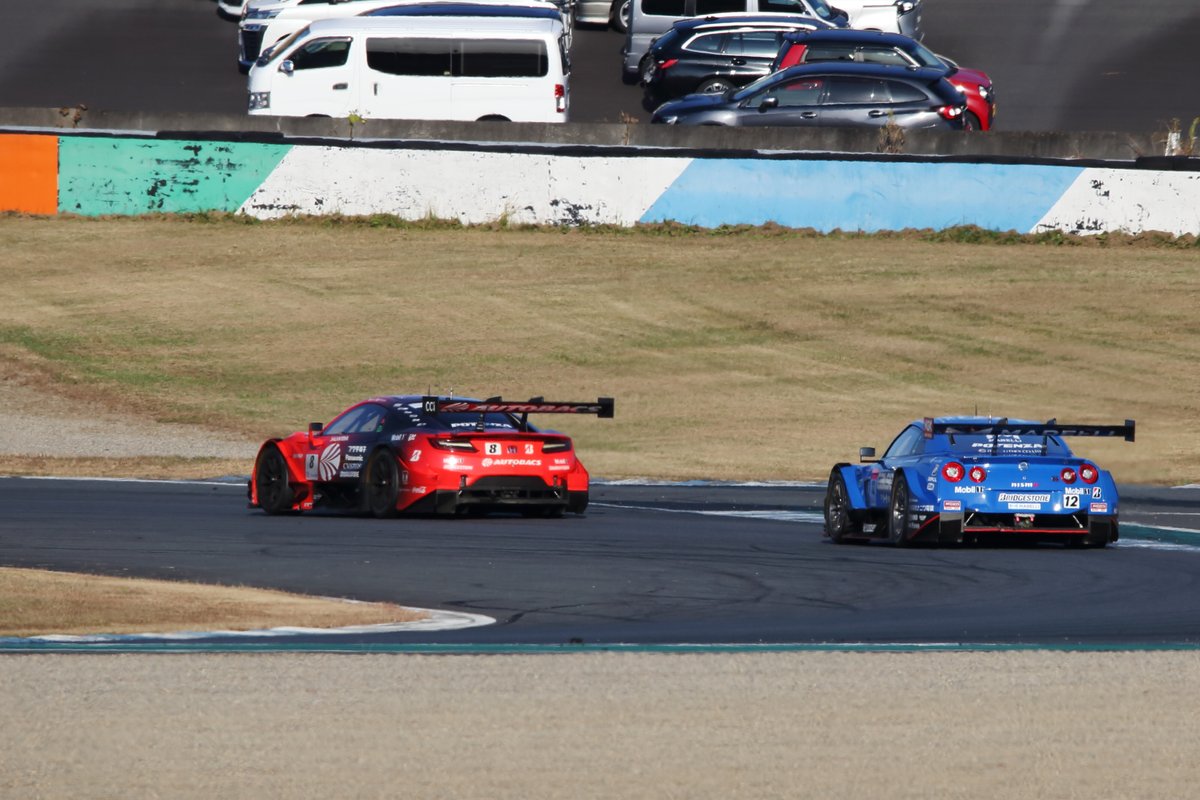 Nojiri capitalises on Hiramine running dry on the final tour

While the Bandoh Toyota of Kunimoto held the lead in the early stages, Impul's Matsushita was the man to watch as he passed Fukuzumi's ARTA Honda and Daiki Sasaki's Kondo Racing Nissan to grab second on the opening lap.

Matsushita settled into second behind Kunimoto for the opening part of the race, with Fukuzumi close behind in third, but ex-Formula 2 racer Matsushita began to catch the leading Toyota following the second of two early full-course yellow periods.

On lap 21, Matsushita got a run exiting Turn 2 and managed to go around the outside of Kunimoto to move into the lead, before pitting to hand over the Impul car over to Hiramine on lap 23.

Fukuzumi pitted to give the ARTA Honda to Nojiri at the same time, and the pair rejoined in that order, with the Bandoh Toyota slipping to a net third following its stop on lap 24.

Hiramine appeared comfortable out front, leading Nojiri by as much as four seconds at one stage, but Nojiri closed the gap as the race reached its closing stages and was within a second of the Impul Nissan entering the final few laps.

However, Nojiri was never able to draw close enough to attempt a pass, until Hiramine suddenly slowed on the final lap.

Hiramine was able to nurse the stricken #12 car to the finish after swerving from side to side in a desperate bid to eke the last remaining fuel from the Nissan's tank, but was beaten to the line by Miyata in the Bandoh Toyota by just over a second. 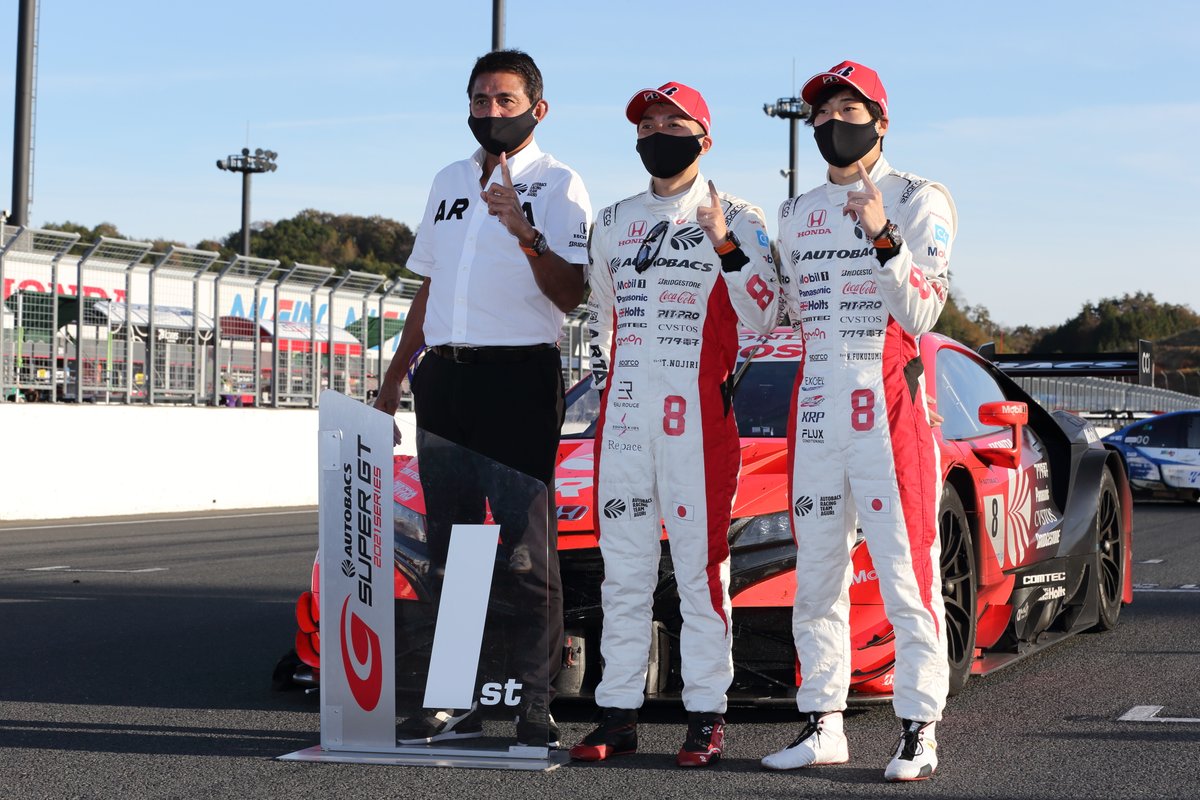 The Mugen Honda shared by Toshiki Oyu and Ukyo Sasahara held fourth for much of the second stint, but Oyu was powerless to hold off the Real Racing Honda of Koudai Tsukakoshi in the closing stages.

Tsukakoshi made the move on lap 53 to score more valuable points and keep himself and team-mate Bertrand Baguette, who had started the car, within eight points of the championship lead heading to Fuji.

Sixth went to the Rookie Racing Toyota of Kazuya Oshima and Kenta Yamashita, who scored their first points since round two at Fuji to barely remain in mathematical title contention, followed by the Kondo Nissan of Sasaki and Mitsunori Takaboshi.

Rounding out the scorers were the #38 Cerumo Toyota of Hiroaki Ishiura and Yuji Tachikawa and the #37 TOM'S car of Ryo Hirakawa and Sacha Fenestraz, the latter picking up a drive-through penalty for making contact with the GT300 LEON Racing Mercedes at Turn 10.

The SARD Toyota trailed home in 11th having started sixth in the hands of 2008 Hungarian Grand Prix winner Heikki Kovalainen, ahead of the Kunimitsu Honda, which was lucky to avoid a penalty when starting driver Makino tipped the Cerumo Toyota of Tachikawa into a spin early on.

Both Michelin-shod Nissans failed to score, with the NISMO car of Ronnie Quintarelli and Tsugio Matsuda suffering a fuel-related issue and the NDDP/B-Max GT-R being rear-ended by Kovalainen in the SARD Toyota. 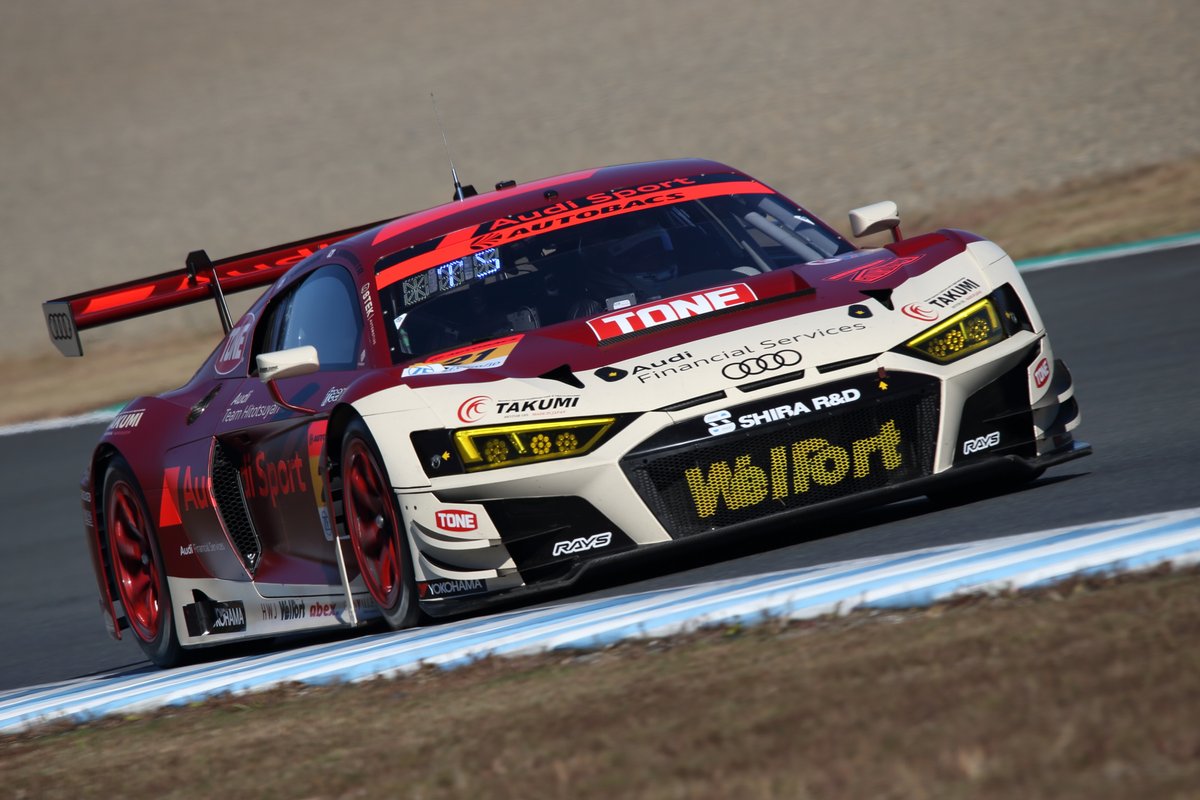 GT300 honours went to the Hitotsuyama Audi R8 LMS of Takuro Shinohara and Shintaro Kawabata, who prior to the Motegi round had not scored a single point all year.

Having run fourth early on, Kawabata was among the first of the front-runners to stop, vaulting up second behind the ARTA Honda NSX GT3 of Shinichi Takagi and Ren Sato. Shinohara subsequently passed Sato take the Hitotsuyama squad's first win since last year's Suzuka race.

The ARTA car had inherited the lead early on when the pole-sitting UpGarage NSX of Takashi Kobayashi and Teppei Natori suffered what appeared to be terminal engine trouble.

Third place went to the Kondo Racing Nissan GT-R NISMO GT3 of Joao Paulo de Oliveira and Kiyoto Fujinami, who came from seventh on the grid with a late pitstop.

De Oliveira exited the pits just ahead of the championship-leading Subaru BRZ, which was locked in battle with the #88 JLOC Lamborghini Huracan GT3, and was able to hold position until the finish.

A spin for Takuto Iguchi in the Subaru dropped he and Hideki Yamauchi to sixth at the finish, meaning the pair take a reduced six-point lead over de Oliveira and Fujinami into the Fuji Speedway finale.

JLOC duo Takashi Kogure and Yuya Motojima were promoted to fourth by Iguchi's error, while Tsuchiya Engineering Porsche pair Kimiya Sato and Takamitsu Matsui were fifth for their best result of the season so far.