ARTA duo Tomoki Nojiri and Nirei Fukuzumi won round six of the 2021 Super GT season at Autopolis, ending Honda's victory drought at the track that stretched back to 2007.

With the two cars that started on the front row dropping out of contention in a disrupted first stint, Fukuzumi quickly moved up to second place in the #8 ARTA NSX-GT before leapfrogging the Nakajima Racing Honda of Takuya Izawa in the pitstop phase to gift newly-crowned Super Formula champion Nojiri a lead he would never lose.

The result marked ARTA team’s first Super GT win since last season’s penultimate round at Motegi, and follows just a month after its victory challenge spectacularly unravelled at Sugo.

On the opening lap, a fast-charging Kenta Yamashita in the Rookie Racing Toyota passed the pole-sitting Mugen Honda of Toshiki Oyu to take the lead of the race, with Izawa remaining third in the Nakajima car.

However, the Rookie crew was never expected to be in the fight for victory thanks to a five-second stop/go penalty for an engine change, and Oyu duly retook the lead when Yamashita dived into the pits at the end of lap six to serve his sanction.

On the restart, Oyu pulled away cleanly to build a small buffer over the chasing pack led by Izawa. But Mugen’s hopes of scoring a first victory since its return to the GT500 ranks ended when the left-rear tyre suddenly detached from the car on lap 18, forcing a devastated Oyu to pull off the track and retire.

This promoted Izawa into the lead ahead of Fukuzumi, but the race was neutralised yet again when GT300 driver Yudai Uchida suffered severe damage to his #48 NILZZ Racing Nissan following contact with Sean Walkinshaw's Lexus.

Several cars immediately dived into the pitlane to complete their mandatory stop, as the pit window opened by the time the safety car period ended on lap 24, led by fourth-placed Heikki Kovalainen in the SARD Toyota. 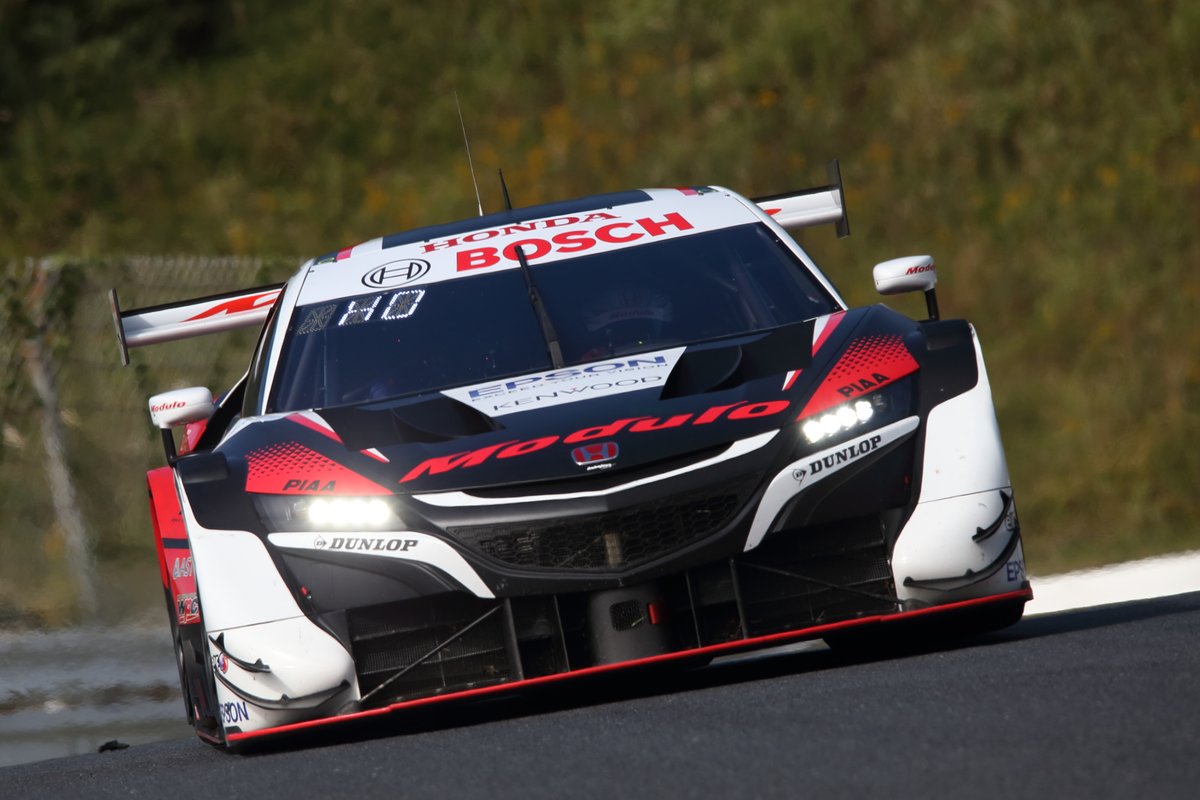 Izawa led prior to the pitstops, before Otsu's tyre woes dropped him to 12th

Izawa waited until the end of lap 29 to make his pitstop, allowing Nojiri - now at the wheel of the ARTA Honda - to snatch the lead.

Hiroki Otsu did mount a fightback after taking over from Izawa, running closely behind Nojiri once his tyres were up to temperature. But once both cars had cleared GT300 traffic, Nojiri pulled out a comfortable lead to win by 28 seconds.

Nakajima pair Otsu and Izawa couldn’t make it a Honda 1-2 due to the former's Dunlop tyres falling off a cliff as the race neared its conclusion, with Otsu losing four places in a span of one lap - eventually plummeting to 12th.

Initially this promoted Yuichi Nakayama - in for Kovalainen - to second, with the NISMO Nissan of Tsugio Matsuda in hot pursuit. But both were passed by the recovering Cerumo Toyota (which had served a drive-through penalty earlier on with Yuji Tachikawa at the wheel) of Hiroaki Ishiura, who grabbed second to record a first podium finish of a troubled season.

B-Max Nissan duo Kohei Hirate and Katsumasa Chiyo likewise charged from the back of the GT500 field, with Hirate snatching fourth from the SARD Toyota of Nakayama at the start of the final lap.

Behind, Naoki Yamamoto boosted his chances of defending the title with an impressive drive to sixth place in the Kunimitsu Honda that co-driver Tadasuke Makino had started a lowly 13th.

Seventh place went to Sugo winners Nobuharu Matsushita and Kazuki Hiramine in the Impul Nissan, while Real Racing Honda duo Bertrand Baguette and Koudai Tsukakoshi lost more ground to Yamamoto in the championship standings with an eighth-place finish, slipping 16 points behind the reigning champion with two rounds to run.

The top 10 was completed by the two TOM’S Toyotas, with the #37 car piloted by Ryo Hirakawa and SUPER GT returnee Sacha Fenestraz, leading the sister #36 GR Supra of Yuhi Sekiguchi and Sho Tsuboi. 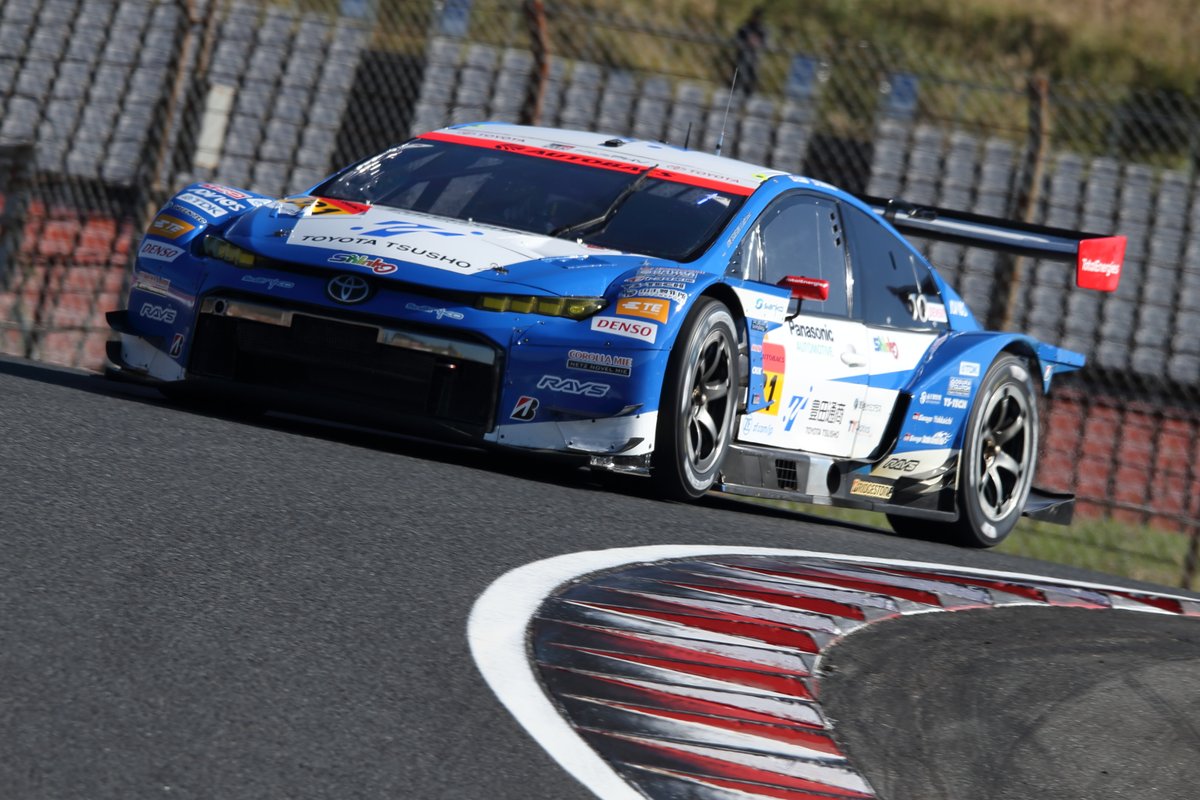 Saga and Nakayama saw off the Subaru challenge

The hybrid Toyota Prius converted pole position to claim a first victory in GT300 since it switched to a front-engine configuration in 2020, beating K-Tunes Lexus to top honours at Autopolis.

Although both the K-Tunes and Subaru team mounted an attack for the lead at various times, neither could put on a sustained challenge, allowing Koki Saga and Yuhki Nakayama to take a convincing 10-second victory in the #31 apr Prius PHV GT.

With Sena Sakaguchi back at the wheel of the #96 Lexus as Morio Nitta’s team-mate, after a brief stint in the GT500 ranks, the K-Tunes squad secured its maiden podium of the season in second ahead of championship leaders Takuto Iguchi and Hideki Yamauchi in the #61 R&D Sport Subaru.