Courtney had led away from pole for Holden Racing Team, pulling a comfortable gap over Dick Johnson Racing's Chaz Mostert as the rookie resisted Will Davison.

The race only came alive in its final third. A clash between race two winner Mark Winterbottom, who had qualified badly, and Rick Kelly left the Nissan stuck in the infield mud, prompting a safety car.

Over half the field took the chance to pit for fresh tyres, leaving the top 11 on older rubber looking vulnerable going into the closing stages.

Another safety car, caused by front-row qualifier Jason Bright crashing out of fourth, then gave the new-tyre runners an even better shot at making progress.

Fabian Coulthard and Garth Tander led that charge. Coulthard grabbed third as Davison recovered from a trip over the grass in the closing laps, and then passed Mostert for second a few corners from the flag.

Courtney was 2.9 seconds clear though and secured his return to the top stop at last.

Mostert hung on to third by just 0.2s as Tander and Shane van Gisbergen exerted huge pressure on the run to the flag.

Davison came home sixth, which was still a boost to his title chances as after poor qualifying results Craig Lowndes, Jamie Whincup and Winterbottom could only manage 10th, 13th and 17th respectively. 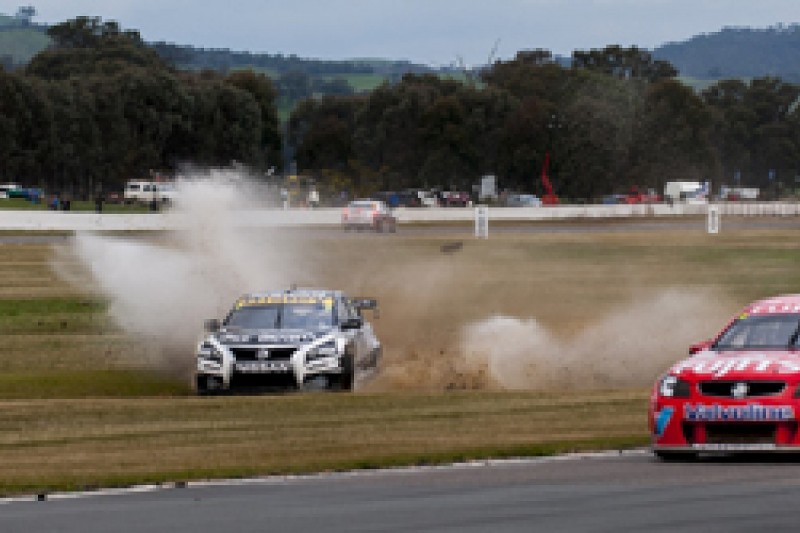 Whincup was at the centre of first-lap drama when startline contact with Todd Kelly sent the Nissan flying across the grass (pictured) and into the infield wall.

That prompted the first of what would be three safety cars in the 34-lap race.

The lap one mess also resulted in Scott Pye parking his Holden in the pitlane on fire due to contact that damaged his exhaust.