McLaughlin finished 1.3 seconds clear of Tickford driver Chaz Mostert to take a win tinged with controversy after the points leader was bumped off the track by DJR Penske Ford team-mate Coulthard on lap one and then rejoined in the lead pack after missing three corners of the circuit.

It all happened as part of a frantic start to the race, which featured three leaders inside the first two laps.

Initially it was Coulthard who led the way, before getting surprised by a fast-starting James Courtney at Turn 4 on the first lap.

Getting run wide by Courtney pushed Coulthard down to fourth, right on the bumper of team-mate McLaughlin.

He was then a little too close on the way into Turn 5, tagging the back of McLaughlin's Mustang as both Penske cars ended off the road.

While Coulthard rejoined near the back of the field, McLaughlin opted to shortcut the circuit, missing Turns 6 and 7 and coming back on the run to Turn 8 in third position.

There was more drama at Turn 4 on lap two, with David Reynolds dive-bombing Courtney for the lead. He only got the job done thanks to a decent hit on Courtney's right-rear corner, which dropped Courtney back to fourth.

Reynolds took off in the lead, but did so with a five-second penalty for the contact hanging over his head.

McLaughlin quickly turned the heat up on second-placed Chaz Mostert, and passed the Tickford Ford on lap five. He then set after Reynolds, closing the gap to a couple of tenths before opting to pit for clean air on lap 12 of 40.

Reynolds made his stop at half-distance, with the five additional stationary seconds dropping him back to fourth on the road, behind new leader McLaughlin, Mostert and an undercutting Jamie Whincup, who had made his stop on lap six.

Erebus driver Reynolds was able to clear Whincup quite quickly, but was still more than 10s behind McLaughlin - his hopes of victory over.

That meant the battle for the lead was down to McLaughlin vs Mostert, the latter with rubber that was seven laps fresher.

Mostert's challenge for the lead was persistent, but ultimately unsuccessful. As the laps counted down the gap between the two slowly began to grow, with McLaughlin regaining the control he needed to take a 1.3s win. 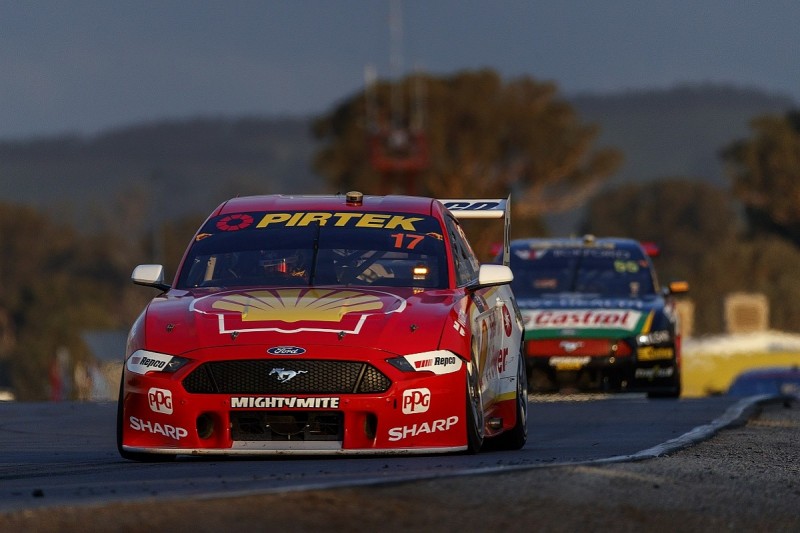 "It's an awkward one. I didn't know if Fabian was 100% there, I thought it was my corner, I was in front far enough," said McLaughlin of the first lap incident.

"I went off the road and tried to get back and rejoin in the right position, but I was going to go the wrong way, so I was dammed if I did and dammed if I didn't.

"I pushed on and thankfully it was OK."

Reynolds finished third despite that penalty, with Courtney finishing right under his rear wing in fourth.

Nick Percat finished seventh, with Lee Holdsworth eighth on the road but demoted to 16th thanks to a 15s time penalty for spinning Anton De Pasquale during the first stint.

That moved Andre Heimgartner into eighth, followed by Mark Winterbottom and Scott Pye.

Coulthard finished way down in 16th, having been slapped with a 15s penalty for the lap one contact on his team-mate.

There's now a 232-point gap between the two Penske Ford drivers in the standings, and McLaughlin has already matched the nine wins he took while securing the 2018 title.