The win was the sixth for Lowndes and Richards's fourth, but it looked unlikely after they started 22nd on the grid, which was unsettled by a wet qualifying session.

Lowndes made ground early but when the rain hit mid-race, he lost many of the positions he had gained, in a clearly unsettled Commodore.

But on a dry track, he fought his way back to the front. 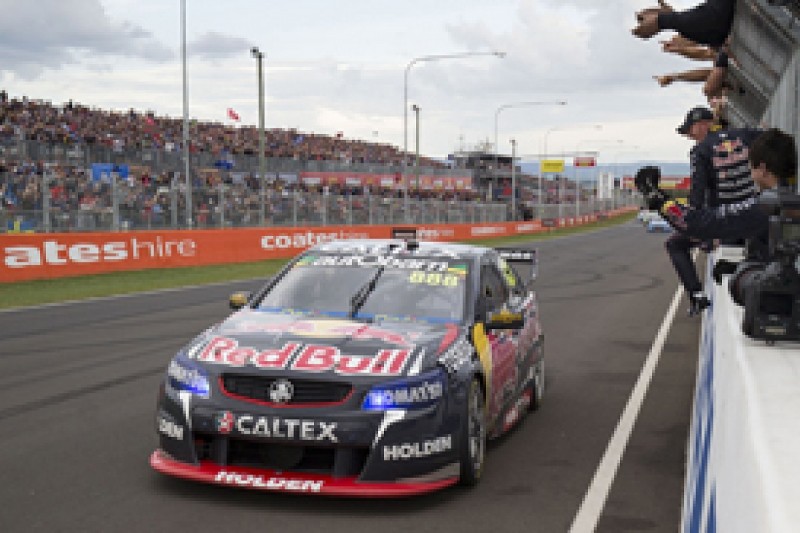 "It's a great honour to be here on the stop step again," said Lowndes.

"It didn't go to plan last year, I screwed up! What we executed was what we planned at the start of the day."

The winning margin was 1.36 seconds but Winterbottom, who started 14th, still holds a commanding championship lead.

Tander started one spot behind Winterbottom, but took advantage of a typically robust battle after a restart to take two spots in one corner to seize the final podium position.

The race was beset with some rough weather, which forced the entire field onto wets and threatened to upset the running order.

Some of the fancied runners struggled.

Jamie Whincup looked set to challenge team-mate Lowndes for the win until, with 20 laps to go, he was deemed to have overtaken a safety car without authorisation.

He protested his innocence, but a subsequent drive-through penalty dropped him down to the order.

Likewise, the DJR Team Penske Ford of Scott Pye/Marcos Ambrose was looking for a good result, until the former NASCAR Sprint Cup driver went a bit too far on his wets, losing track position.

Pye crashed the car late in the race when a steering arm broke.

It was a difficult day to be a visitor to Mountain Panorama, with a number of overseas drivers having problems.

Sebastien Bourdais was ninth in a Walkinshaw Commodore, driving with Lee Holdsworth, while Oliver Gavin was well-placed in the Holden he shared with 2011 winner Nick Percat, until he was involved in a collision with Mercedes driver, Will Davison.

Simona de Silvestro was the last classified finisher, despite losing nearly 40 laps when her co-driver Renee Gracie crashed on oil on lap 15.