De Pasquale got the jump on Will Davison from the outside of the front row at the start to bank track position for the opening stint.

The two Shell Fords then ran in formation with a little under a second separating them.

Behind them it was initially Cam Waters who sat in third, however the Tickford driver was passed by Shane van Gisbergen at Turn 6 on lap 17.

On lap 19 De Pasquale pitted from the lead, however he didn't resume in the effective lead. That instead went to Chaz Mostert, who had pitted 10 laps earlier for just two new tyres and pulled off a massive undercut to go from sixth to the lead.

Mostert's gamble looked to have hit a serious snag on lap 26 when Garry Jacobson and Zak Best tangled and Best ended up in the wall on the outside of Turn 6.

The resulting safety car should have left Mostert as a sitting duck, with De Pasquale and his three new tyres, and Will Davison on four new tyres taken on lap 23, right behind him.

Davison was best-placed for the lap 31 restart based on tyre condition, however the veteran was slow away when the race went green.

That let van Gisbergen get under him into Turn 1, the pair making contact as Davison was escorted wide.

Davison slipped back to fifth while van Gisbergen picked up damage and dropped all the way back to 21st. He was also slapped with a 15-second penalty for his efforts, which meant the series leader was classified dead last.

That left De Pasquale as the sole challenger to Mostert and his ailing rubber, but try as De Pasquale might there was no way through, as the Walkinshaw Andretti United driver held on for a famous win.

"There's no worse mentality than going into a safety car knowing everyone has fresher tyres than you," said Mostert. "Not just two, but four.

"Ripper effort by the team, we went super aggressive. The [car] somehow just hung on. I kept Anton just at bay, I had nothing left."

The win comes amid what's been a difficult weekend for WAU and Mostert, who was disqualified from two sessions, one of which was yesterday's opening race.

De Pasquale's aggressive measures to try and get through Mostert late in the race saw Cam Waters almost sneak through for second.

The two Ford drivers ended up drag racing to the finish line, De Pasquale just holding on ahead of his Tickford rival.

Given van Gisbergen's woes, the second place has helped De Pasquale close the points gap to the Kiwi to 214.

Davison finished fourth ahead of a fast-finishing Andre Heimgartner, Broc Feeney and Will Brown.

James Courtney was a surprise appearance on the grid after his Mustang was badly damaged in Sunday's earlier race.

The Tickford Racing crew put in a rapid shift between races to repair the car, only for it to cop more bonnet damage early in this race. Still he was able to come home 19th.

Scott Pye's car, which was also damaged in the Courtney crash, unfortunately couldn't be repaired in time to take part in the race. 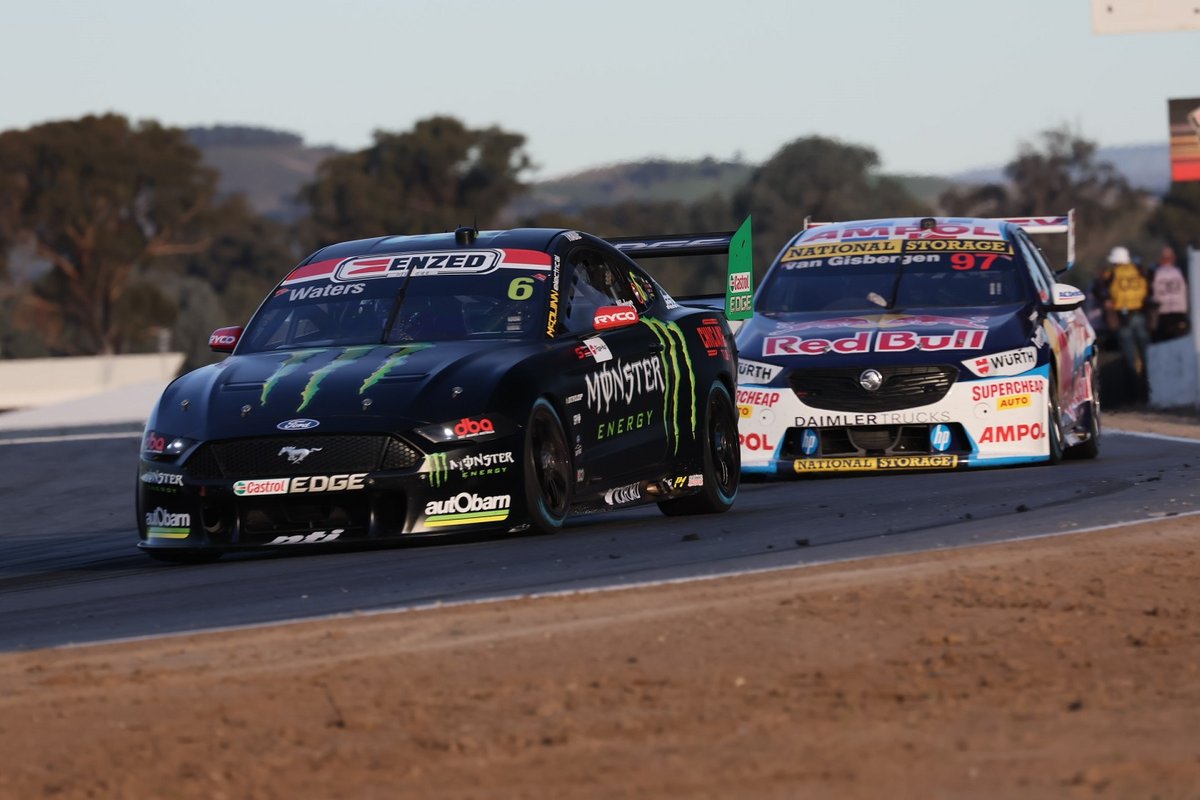 Cam Waters held off Will Davison to win a Supercars race marred by a nasty early crash for James Courtney.

The race was only green at the start for a number of corners before it was neutralised following a frightening crash for James Courtney.

The Tickford driver looked to be fired off the road on the exit of Turn 5 before bouncing across the infield and collecting a number of cars on the other side, including Scott Pye and team-mate Thomas Randle.

The impact effectively took all three drivers out on the spot and led to the race being red-flagged after a handful of laps behind the safety car.

After a lengthy clean up the race was restarted behind the safety car before finally going green again on lap 5.

At that point polesitter Waters was leading Davison, David Reynolds and Shane van Gisbergen at the head of the queue.

Those four held formation across the first stint before van Gisbergen kicked off the stops for the front-runners by taking on two new tyres on lap 17.

Waters and Davison responded on the next lap, resuming in what was effectively first and second, while Reynolds opted for an overcut and stayed out.

As the stops shook out Waters and Davison ended up in their own battle for the lead, little to separate the pair across the second stint.

But as tense as it was there was no way through for Davison, Waters holding on for victory.

Van Gisbergen backed off in the second stint to hold up Anton De Pasquale in fourth, the Kiwi never confident that he could fight the top two cars and instead looking to consolidate third.

Reynolds, meanwhile, gambled on a four-tyre stop on lap 22 which dropped him to ninth for the run home, and with his superior grip he was able to make decent headway, but fifth was the best he could manage by the finish.

Jack Le Brocq moved forward from eighth on the grid to sixth at the finish ahead of Mark Winterbottom, Chaz Mostert, Andre Heimgartner and Nick Percat.