The points leader and Saturday race winner endured a difficult start to the day, missing out on an automatic Q2 spot after failing to make the top 10 in the morning practice session.

He then failed to get out of Q1 during qualifying, which left him 19th on the grid for the 200-kilometre marathon around the high-degradation Barbagallo circuit.

But the lowly grid spot couldn't stop McLaughlin taking a fourth consecutive Supercars race win, as he charged through the field to grab another 150 points.

"That was the best race I've ever raced," McLaughlin told Fox Sports.

"I think the start, the pitstops, I felt like every time I stepped on my marks, the car was fantastic.

"I'll take it, because I didn't expect it this morning. It's a nice way to repay everyone for their hard work. It's icing on the cake, that's for sure."

There were two crucial factors to McLaughlin's rise - the first was a frantic pair of opening laps, with contact in the midfield helping McLaughlin carve through to 12th.

He then benefitted from an early safety car, called when GRM drivers James Golding and Garth Tander tangled at Turn 1, which left Golding stranded in the sand.

With a number of cars needing to double stack at the ensuing pitstops, McLaughlin was able to move into fifth with just five laps completed. 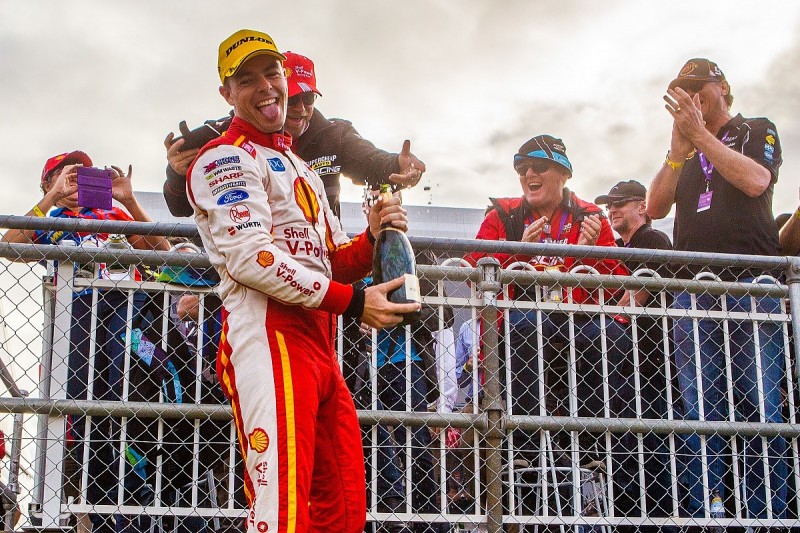 "I knew we were in a good spot. After that first safety car, I thought 'were fifth here on the road. Even if we get out of here with fifth I'm stoked' from where we were," he said.

"I think if there wasn't a safety car, we might have switched to a two-stop maybe, or we were thinking about the three-stop.

"I was thankful that the safety car came out, because I jumped about two or three in the pits that were double stacking. A lot of things happened that went our way."

While he benefitted from some spirited racing at the back on the opening couple of laps, McLaughlin admitted that it was uncomfortable at times.

"I'll tell you what, there are a few guys at the back there that race pretty hard, especially at the start. It surprised me a little bit," he said.

"There was a lot of luck in that whole race.

"It was pretty full-on. Rubbing is racing and we love it, and we race hard. But oh my god, it was full-on. When I crossed the line I was like 'phew, thank god'."