The Erebus driver was robbed of a second Bathurst win on Sunday when severe cramping - thought to be from dehydration - forced him out of the race during a triple-stint to the finish.

He had led the race until that point and tried to make it through the last stint, only for a loss of feeling in his left leg to result in the early release of the clutch during his final stint.

That meant he was given a drivethrough penalty, at which point he finally handed the car over to co-driver Luke Youlden.

He claimed his "body gave up" and that "I was at 50% throttle, I couldn't tell if I was on the brake or on the throttle" when he was passed by Craig Lowndes, who went on to win the race alongside Steve Richards.

Reynolds said his first step would be to see a doctor to confirm if his suspicions regarding dehydration were correct.

"You psychoanalyse your own performance within an inch of its life," he told Autosport.

"I think I know what happened, I think I just dehydrated myself. I sweated out everything I had.

"I'm notoriously bad at drinking while I'm in the car. I never do it, because I've never needed to. I've never felt those signs on dehydration.

"I'll go see someone and be better prepared. That's all I can do. Knowing the signs is the first thing. 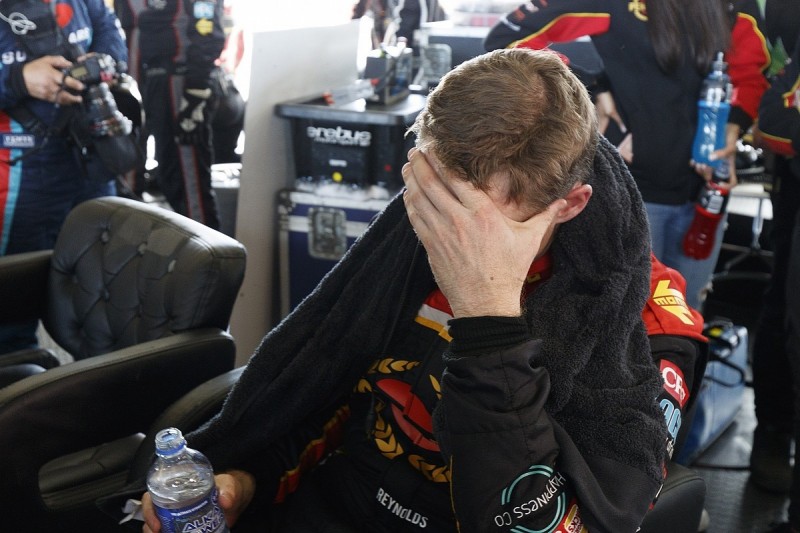 Reynolds admitted he was mentally exhausted at first, before his issue later became physical.

"They did a [windscreen] tear-off at the last stop, I thought the screen was dirty. But my vision didn't get any clearer afterwards.

"I put my foot on the clutch during the stop, I put the car in the gear, and my foot was cramping so much. I was telling myself to keep the clutch in, but the wheels must have been spinning."

Reynolds had complained of tiredness throughout the week, and thinks the media-heavy build-up as the reigning race winner contributed to his breakdown.

"I've had a massive lead-up to the race, which probably contributed to it," he said. "I've spoken to every man and his dog about the race.

"I was probably 70% fit in qualifying, and I woke up 50% on Sunday. "The race took it all out of me. The warning signs were there.

"I'm fucking gutted. You work your whole career for a fast car at Bathurst."