Neither regular driver Waters or co-driver Stanaway had previously won a main game Supercars race, but they held off spirited challenges from the likes of Penske's Scott McLaughlin/Alex Premat and Triple Eight's Paul Dumbrell/Jamie Whincup.

The event only ran 125 of the scheduled 161 laps as a lengthy red flag, caused by Taz Douglas firing into the wall with a tyre failure on the opening lap, soaked up the first hour and turned it into a time certain race.

Stanaway held the more experienced Dumbrell and Premat at bay through the first stint, and while Waters was unable to shake off Premat's championship-leading partner McLaughlin at the end of the race, he resisted the pressure to win by 0.675 seconds. 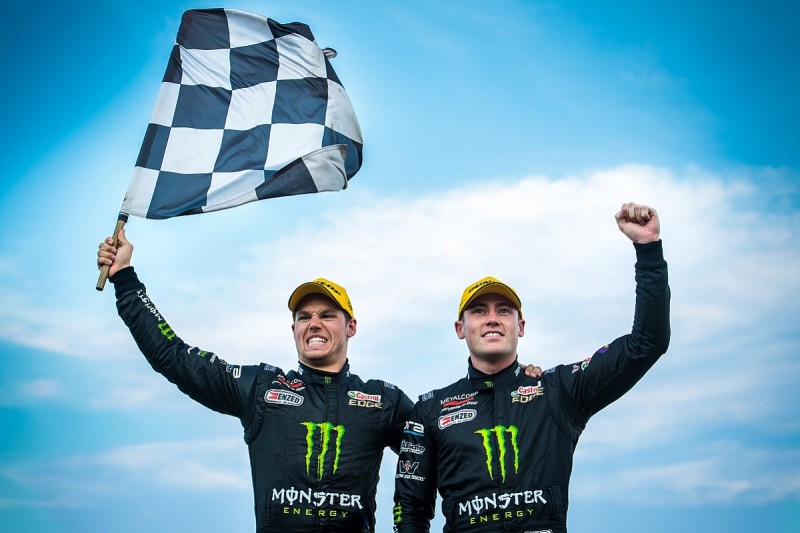 Dumbrell and Whincup looked set to take control in the second stint, having grabbed the lead in the stops, but a right-rear tyre failure meant a slow limp back to the pits. They recovered to sixth.

Reigning champion Shane van Gisbergen and co-driver Matt Campbell rapidly came through from outside the top 20 at the start following an incident-filled Saturday to challenge for the top three.

But van Gisbergen dropped off the back of the leaders in the final stint and had to focus on holding off Chaz Mostert for third place, only for front-right tyre failure with 18 laps to go to consign van Gisbergen to 16th.

Mostert and co-driver Steve Owen's third was a comeback of sorts after Owen was hit with a five-second penalty for a forceful passing move on Luke Youlden early in the first stint.

Last year's Sandown winner Garth Tander and James Golding were the best of the Holdens in fourth, having passed the Fabian Coulthard/Tony D'Alberto Penske Ford on the penultimate lap.