Michael Andretti's IndyCar squad and the United Autosports team co-owned by McLaren executive director Zak Brown bought into the Walkinshaw entity last October, and the team was formally rebadged on January 1 ahead of the 2018 Supercars season.

James Courtney scored the team's first podium in the season opener at Adelaide at the start of the month, but Pye went one better with victory in the third Supercars race on the Formula 1 Australian Grand Prix support bill on Saturday.

Pye almost had a dominant performance across the first two thirds of the race undone by a late rain storm, but did just enough to win by 0.2 seconds over seven-time champion Whincup after a slick-tyre drag race to the flag in near-dark and damp conditions following a delay to F1 qualifying.

From third on the grid, Pye found himself in the lead of the race by lap two, having passed Nick Percat at the start before being gifted first when Penske driver Scott McLaughlin went skiing through the grass at Turn 1 the second time around.

That left Pye and Whincup in a clear first and second, with the WAU driver keeping Whincup's Holden at bay before their only stops on lap 10.

Pye added to his lead through that phase, establishing a three-second gap, and looked to have the second stint under control before the heavens opened with nine laps to go.

While a number of contenders opted to pit for wets, Pye rolled the dice and stayed out.

Although that initially meant he had no pressure from behind, with two laps to go he almost threw it away - with a half-spin at Turn 13 at the end of the back straight costing him three seconds and allowing Whincup to get right under his rear wing.

The pair went at it until the flag, but Whincup could not deny Pye an emotional victory.

"I'm just speechless. It's a really special moment," he said. "I was trying to hang in there. 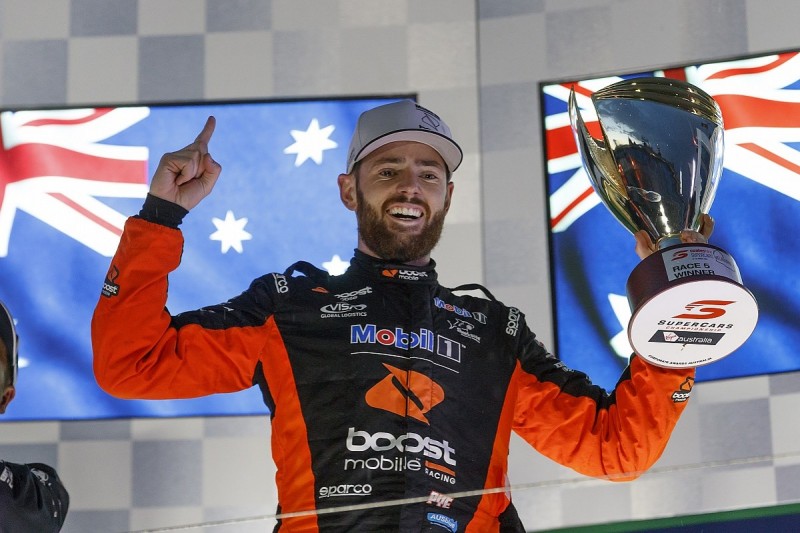 "I just wanted to push out of the pitlane [after his stop] and try and pull away so we could manage the tyres. The car was mega in the dry, but in the wet we fried the rear tyres a little bit.

"It was good fun now that I reflect on it, at the time I was hating every moment of it. I couldn't be happier right now."

Victory in the third Supercars support race on the Australian Grand Prix undercard was Pye's first in Australian Supercars since first racing in the series in 2012.

His best finish in his previous 164 starts was second, which he first achieved at Pukekohe in 2016 before finishing runner-up in last year's Bathurst 1000 race.