McLaughlin has 'biggest' ever head-on crash in Supercars testing

The DJR Team Penske Ford driver went off at the fast first corner, with a deflated tyre pitching him through the sand and into the wall just an hour into the afternoon's four-hour session.

McLaughlin had been fastest at the time of his crashed.

"I headed into Turn 1, no dramas whatsoever, then the tyre went down and I went straight ahead," he said.

"I was pushing the pedal [but] it was doing nothing! I just ended up in the wall.

"It [the impact] was decent. Thankfully for most of my career I haven't had a big head-on hit, but that's the biggest I've had.

"The car and everything did its job, as did the tyre wall. But it skipped across the gravel pretty easily. It went in right-front, pretty much head-on, but more so on the right side."

McLaughlin said he had been running on a set of 2017-spec Dunlop tyres, which will be replaced this year with what is likely to be a more robust construction, like the series used in 2016.

"I think it proves and backs the decision of Supercars to move to the '16 tyre," he added.

"To be honest, the car felt awesome. It's just a shame that happened." 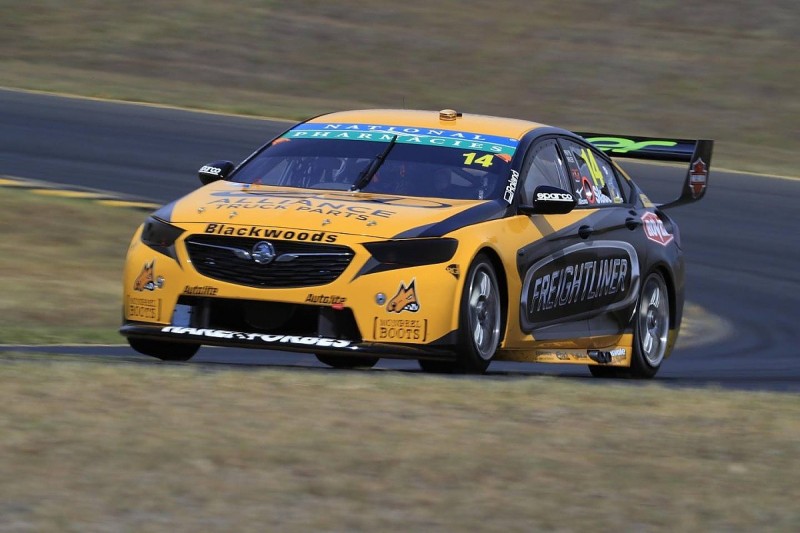 A flurry of quick laps shook up the order during a 10-minute extension to the original four-hour session, added after new Garry Rogers Motorsport recruit James Golding ran off track inside the final 10 minutes of the allotted time.

Slade set the quickest time of the day during that window, becoming the only driver under the 1m29s mark with a 1m28.615s on his final flying lap in his Holden Commodore ZB.

Team DJR Team Penske's Fabian Coulthard got closest to Slade, jumping up to second in the dying seconds with a 1m29.105s.

Nissan driver Michael Caruso was third fastest, just 0.009 seconds lower with a lap of 1m29.114s that just eclipsed the effort that put him on top of the morning session.

Shane van Gisbergen made good use of the qualifying simulations to slot into fourth ahead of Nick Percat, while long-time pacesetter McLaughlin dropped to sixth, after his crash ruled him out of returning to the track in his Ford Falcon FG/X.

Tekno driver Jack Le Brocq finished the day as the best-performing rookie in seventh in his Triple Eight-built ZB Commodore.