Triple Eight driver Lowndes made the perfect getaway from pole and beat fellow front-row starter McLaughlin into the first corner.

As Lowndes pulled away, team-mate Whincup ran nose-to-tail with the Volvo S60 of McLaughlin and the pair exchanged places twice on lap two before the defending champion came out on top.

Whincup then began to chip away at Lowndes' advantage and reduced it to 0.8 seconds before adopting a similar strategy to the one that resulted in victory in the first encounter of the weekend.

Pitting earlier than the rest of the field on lap five of 39 - in an attempt to get the jump on his team-mate - was not as successful this time around as a faulty wheel gun lost Whincup time and dropped him well down the order.

An incident involving James Courtney and Lee Holdsworth on lap 10 would prove beneficial, however, as debris from their coming together - in which Courtney lost his passenger door - lead to the safety car being deployed two laps later.

With the frontrunners - including race leader Lowndes - taking advantage of the caution period, Whincup rose up the order to fourth on the restart before soon picking off Mark Winterbottom for third.

In a repeat of the earlier stages of the race, McLaughlin was forced to fend off Whincup and the gap between the Volvo and Holden was never more than a second during the final dozen laps. 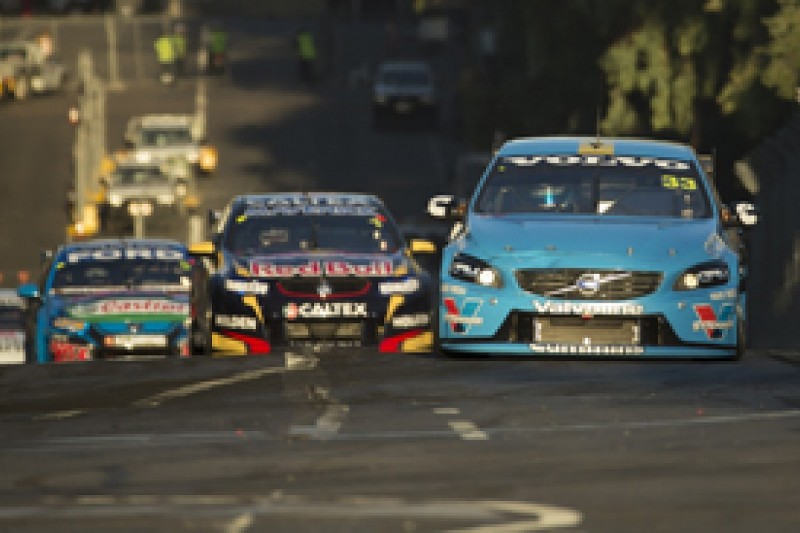 As they fought hard for second, Lowndes continued to extend his lead and went on to claim an emphatic victory, but who would take the next step on the podium was undecided until the last corner of the final lap.

A determined Whincup had barged his way past McLaughlin in the dying seconds of the race, but the GRM Volvo driver never gave up and shot past the five-time title winner as they came onto the pit straight.

McLaughlin finished just 0.8s ahead to give the Volvo S60 a maiden V8 Supercars podium on its debut weekend.

Winterbottom held on to fourth while Fabian Coulthard produced a stellar performance to claim fifth, having started 16th on the grid, ahead of Chaz Mostert who put aside his lap one incident in the first race to take sixth.

Garth Tander and Michael Caruso battled to seventh and eighth respectively, and Todd Kelly held off Will Davison after the safety car period to take ninth.

Adelaide V8 Supercars: Whincup holds off Lowndes in race one