The Holden Racing Team driver took the chequered flag through a combination of excellent driving and misfortune for others.

Starting 15th on the grid, Courtney remained under the radar for much of the opening phase of the race, which was led by Jamie Whincup, who pipped poleman Shane van Gisbergen into the first corner.

The pair pulled away from the chasing field before the safety car was deployed on lap 10 following Will Davidson's crash into the Turn 8 wall after being tagged by James Moffat as they battled for ninth.

All the frontrunners bar van Gisbergen and Rick Kelly took advantage of the caution period to make their first stops and the pair were promoted to first and second as a consequence.

The safety car returned to the pits on lap 14, but it was not long before it was deployed again when Jason Bright was involved in a three-wide squeeze on the restart and came off worse.

The Brad Jones Holden driver was tipped into a spectacular roll on the exit of Turn 1 and flipped twice into the nearby crash fencing before landing on his roof.

Bright later confirmed that he was OK after being given the all-clear by medical staff.

Van Gisbergen pitted from the lead during the second caution period and fell down the order, leaving Rick Kelly to take command of the race, but both were soon hit with drive-through penalties after the second restart on lap 19 for accelerating too early before resumption.

Whincup regained first place as a result and it was a position he held until lap 56 when the reigning champion was given a drive-through penalty for a pitlane infringement.

He lost several positions following it and finished 15th after damaging his car while fighting with Michael Caruso in the closing laps.

Whincup's pain was Courtney's gain, however, as he had filtered his way through the field and on lap 56 overtook Lowndes for first place. 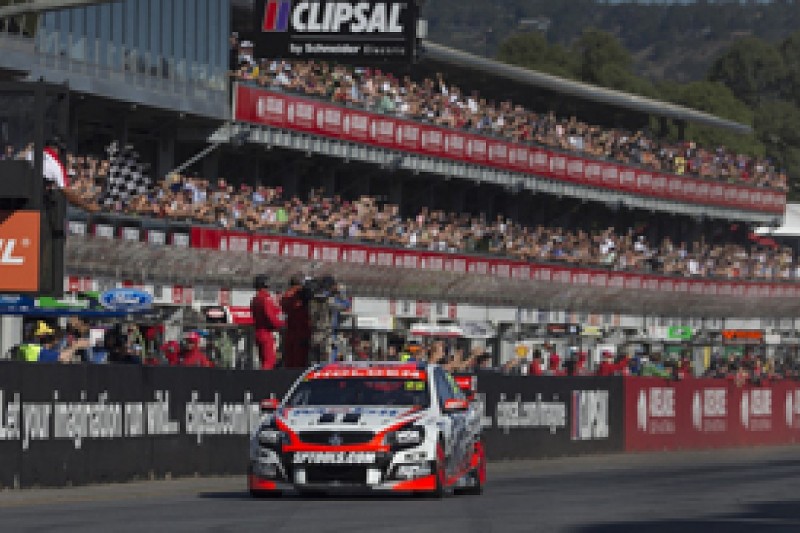 The pair duelled until the chequered flag and the HRT Holden driver was only given room to breath when Lowndes tapped the wall on the final lap.

Despite his earlier misfortune, van Gisbergen made a great recovery drive to claim the final spot on the podium.

That third place had looked to have been going Scott McLaughlin's way - in a repeat of race two - but the Volvo driver stopped on track on lap 66 to bring out the safety car one last time.

Fabian Coulthard finished fourth, ahead of Rick Kelly and Tim Slade, both of whom had been a thorn in his side all race long.

David Reynolds gained the most positions of the day, rising from 22nd to finish seventh, while David Wall, James Moffat and Dale Wood rounded out the top 10, all helped by a late problem for Nick Percat.