The Le Mans Classic finally returned at the Circuit de la Sarthe after an absence of four years, with a plethora of historic machines in action. Closer to home, the force was strong with Tom Gadd in F1000 as the 750 Motor Club visited Brands Hatch

After a four-year COVID-19 enforced layoff, a record number of spectators, cars and drivers gathered at the Circuit de la Sarthe last weekend to celebrate the 10th edition of what has become arguably Europe’s most popular historic motorsport event, the Le Mans Classic.

Organised since 2002 by Peter Auto and the Automobile Club de l’Ouest, cars are split into six plateaux (grids) covering 1923-81, each racing consecutively for an hour, and three times over the hallowed 24 hours. Add four mind-boggling support races and in total 1000 drivers shared more than 700 priceless machines over the four days.

Qualifying began early on Friday with Group C cars, before racing filled most of Saturday. Forty of the monstrous sportscars were listed, fastest being the Porsche 962C of Ivan Vercoutere/Ralf Kelleners. When it came to race time, however, the Silk Cut Jaguar XJR-9 of Jon Minshaw and Phil Keen was at the front, and stayed there as Jaguars finished 1-2-3.

Next up was Motor Racing Legends’ Jaguar Classic Challenge (above), dominated – as expected – by ultra-quick E-types. Gary Pearson took pole with Alex Brundle, enjoying a 2.5-second advantage. Sadly, they only managed one lap of the race, leaving Mike and Matt Wrigley in their silver ‘low-drag coupe’ scrapping over the lead with Jonathan Mitchell’s roadster. The Wrigleys won by three seconds.

Endurance Racing Legends, for what most of us would regard as ‘nearly new’ cars, added to the diversity of the meeting. With such a spread of technology, numerous cars were in with a shout. But those who bet on Shaun Lynn, driving the 2003 British Racing Green Bentley Speed 8 solo, were not disappointed. Forty-seven finished, albeit surprisingly 15 fell by the wayside. Christian Glasel (MG-Lola EX257) started on pole buteventually finished seventh.

Last of the support races was a Porsche showcase and, with 76 entries, the line of cars approaching the start stretched out of sight. The stunning and very noisy 935 K3 of Massimo and Marco Guerra led the way, with Henrique Gemperle/Marc de Siebenthal’s similar car initially on its exhaust pipes. After 11 laps, the Italians won by 49s. Almost 60 of the cars finished, which says a lot about Porsche engineering. 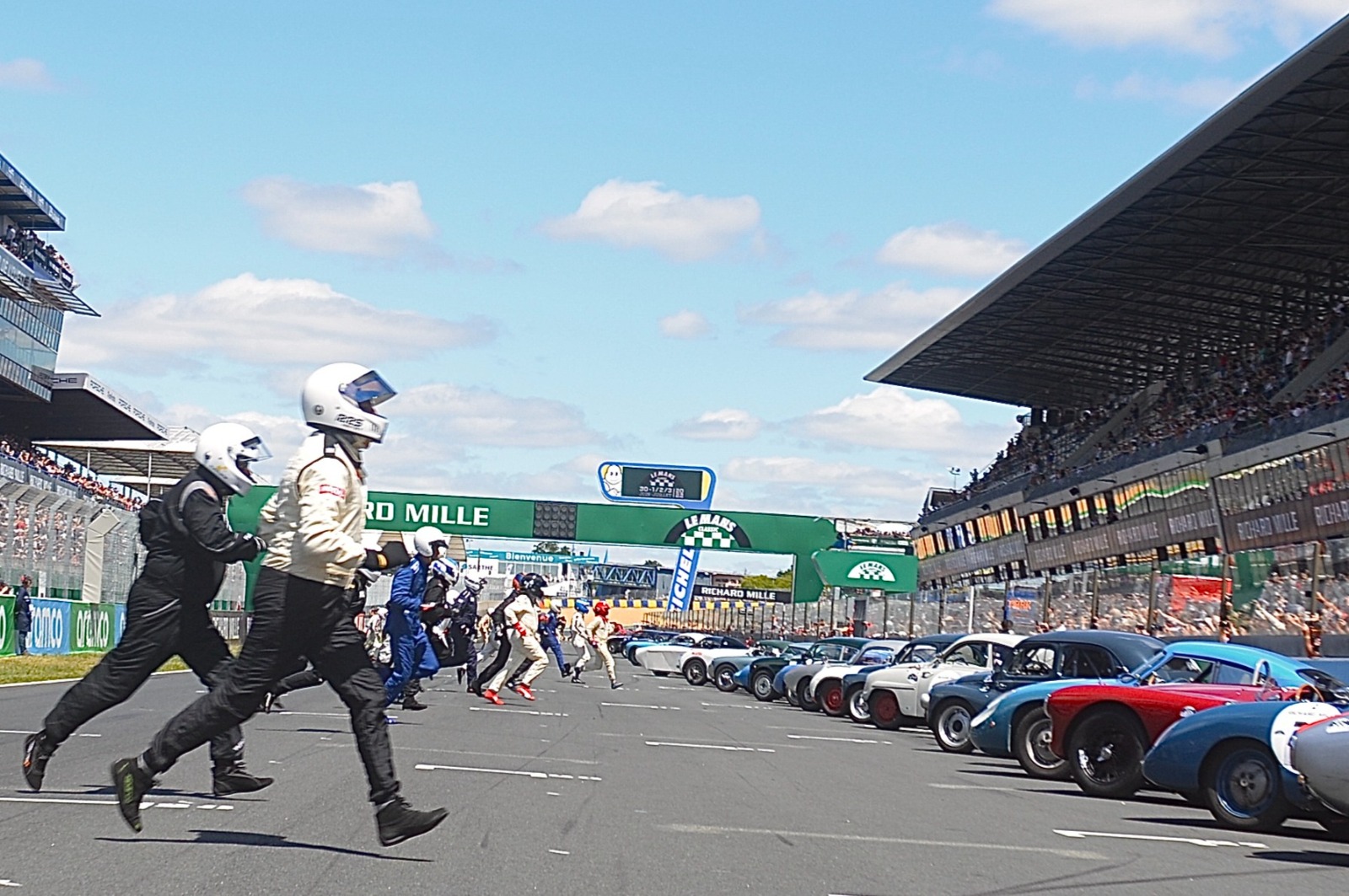 With awards presented, everybody tucked into dejeuner and prepared for 24 hours of pure endurance nostalgia. Each plateau raced for three one-hour stints but, while the formula for ascertaining overall winners can be baffling, nobody refuted the results and most enjoyed a really good time. A notable exception was the Austrian Halusa family, whose unique Ferrari 250 GT ‘Breadvan’ – evolved by Giotto Bizzarrini for Count Volpi – was badly damaged against the barriers when Lukas crashed while chasing a podium two minutes from the chequer!

Overall Grid 1 (1923-39) victory was secured by enthusiastic Britons Duncan Pittaway – a Le Mans Classic rookie – and Tim Dutton in the Goodwood Revival-winning Bugatti Type 35, despite only topping one of the individual stanzas. That was in contrast to Grid 2 (1949-56), which fittingly went the way of the Lukas Halusa/Alex Ames Jaguar D-type that won each of the three races – the only one of the six overall victors to do so. Almost 60 cars were classified as finishers overall, which was very impressive.

The 1957-64 pack contained a mouth-watering selection of sports-racers. Provisional results put James Cottingham/Max Girardo (Ecurie Ecosse Tojeiro-Jaguar) first from the Olly and Grahame Bryant Lotus 15. Eventually, though, the Bryants came out on top, the ‘Toj’ soldiers bumped to third behind Joe Macari/Harrison Newey in a Jaguar D-type.

A magnificent field of 60-plus cars from 1962-65 populated Plateau 4. It finished with a Ford 1-2-3, Portugal’s Diogo Ferrao prevailing in his family’s GT40 – winner of the 2014 Spa Six Hours – after three superb battles. A Shelby Cobra and a Ferrari, of Nicky Pastorelli, led the chase.

Grid 5, showcasing 1966-71, bordered on real classic territory, and was won by Nick Sleep/Alex Montgomery (Lola-Chevrolet T70 Mk3) – despite the crew not topping any of the three bouts – from Henry Fletcher (Chevron B19) and the blood-red open Ferrari 312 P of Remo Lips and evergreen Briton David Franklin. Xavier Micheron’s awesome gas turbine-propelled Howmet TX, apparently a brute to drive, was classified 13th of the 51 finishers.

After several Chevron teams had battled for supremacy of the final set, covering 1972-81, the B31 of Frenchman Ludovic Caron – another not to win any of the individual hour-long encounters – was greeted with La Marseillaise. The pitlane closed as the 2022 clock chimed exactly 24 hours after racing started. Magnificent! 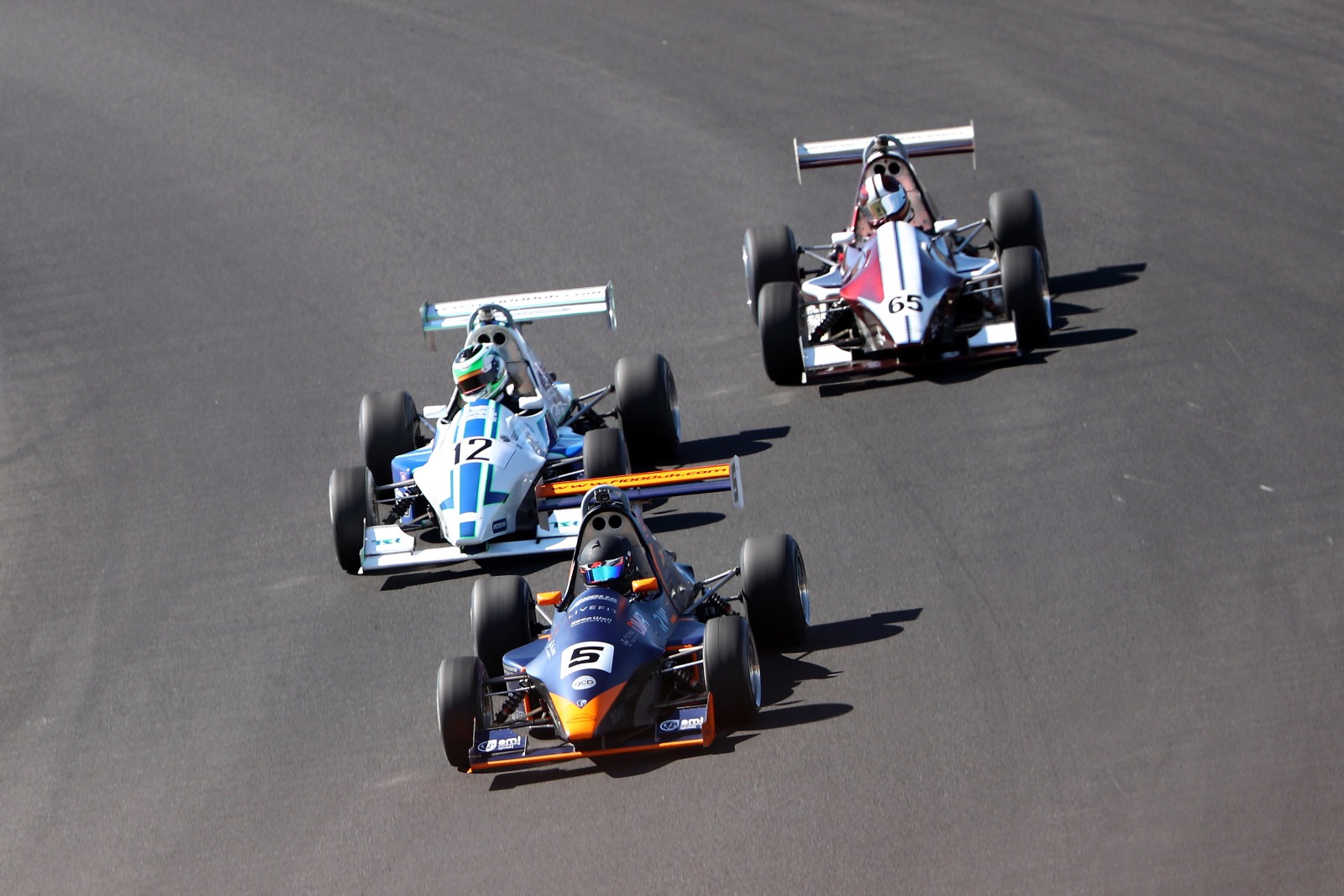 Two fighting second places and a victory in the frenetic F1000 triple-header restored Tom Gadd’s early season points lead as the 750 Motor Club’s top-value Jedi-equipped championship reached its halfway point on the Brands Hatch Indy circuit. The 2019 Locost champion’s tenacious climbs through the field in the Team Sellars Racing car, spannered by his dad, culminated in the weekend’s only sub-45-second lap time.

Fortunes ebbed and flowed like the tides, Powney retiring with a broken driveshaft (unusually the longer one) having led Booth and Welham before a safety car, called with Paul Butcher stranded at Druids. Matt Higginson, Dan Gore and Murfie Aldridge completed the top six.

From ninth on the reversed top 10 race two line-up, the inspired Gadd rocketed to fourth before Druids, then grabbed second from Alsatian polesitter Victor Neumann. But he couldn’t unseat former Sport Specials champ Booth, who maintained his 2022 record of winning at every round, the duo 0.12s apart after another post-caution sprint. Welham, Higginson, Aldridge and Neumann outran Powney.

Best laps in race two decided the finale’s grid. Gadd’s 45.00s netted pole, with Booth, Welham, Aldridge and Powney within 0.05s. Gadd led from lights to chequer, weathering another late safety car with Booth broken at Druids and Sam Satchwell parked at Surtees, and managing the green perfectly to repel Welham and Powney for his third campaign win. Dan Clowes, Aldridge and Higginson led the chase.

Not running his eponymous car for points, Scott Mittell left the category’s outright record at 45.55s (95.47mph) in race two, in which Leese equalled Walker-Hansell’s new 46.25s B target. 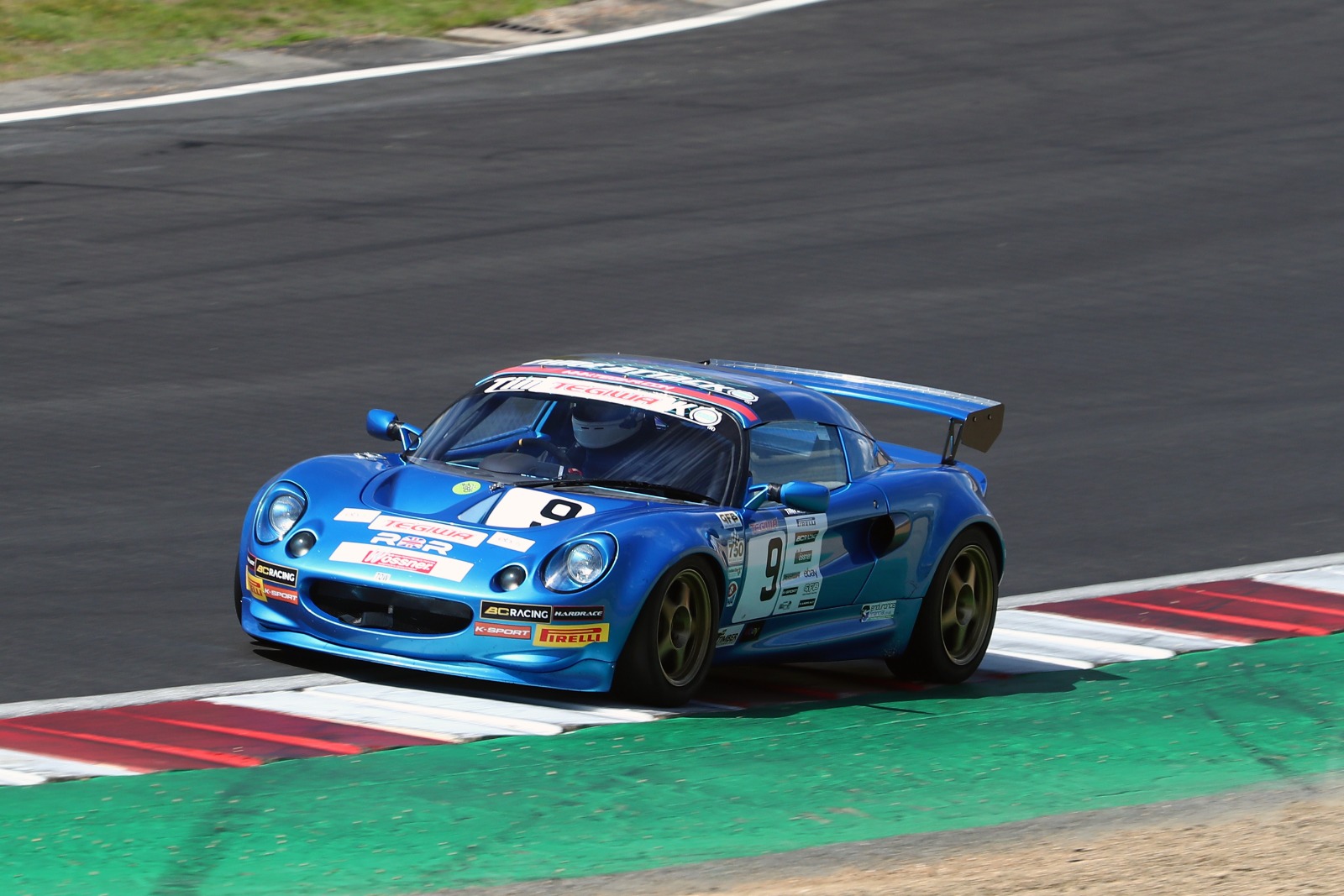 Rob Boston guided his Lotus Elise to the win in Roadsports

Rapid Rob Boston qualified his Lotus Elise fifth for the 45-minute Roadsports race, but pulled off at Paddock after one flyer with a collapsed front wheelbearing. “Probably self-inflicted; too much kerb at Surtees, but I carry spares,” said the Lincolnshire team boss, who went on to win from Club Enduro aspirants Ben and Adam Uren (BMW E46 M3), Kevin Talbot’s understated Honda Integra and Matthias Radestock (Elise).

In a reversal of Croft fortunes, Welshman Leon Bidgway was leading when the moulded air duct feeding the turbocharged Toyota engine in his Lotus Exige came adrift and snagged the left-rear tyre, presaging a smoky retirement. The race ended prematurely when three drivers were involved in a nasty incident at the foot of Paddock. Chris Valentine was extricated from Lewis Harrison’s Elise, which had been rammed, but was subsequently released from the medical centre.

Four-time champion Shaun Traynor seized the Toyota MR2 points lead from top qualifier Aaron Cooke with two accomplished wins, the first by seven seconds over his rival and Adam Lockwood. An early moment left Cooke seventh later as Lockwood and Ali Topley (Mk2) crossed the line in Traynor’s mirrors. Rhys Dorman’s fifth in the latter was a big personal best as an unprecedented eight 1800cc Roadsters made the top 10. 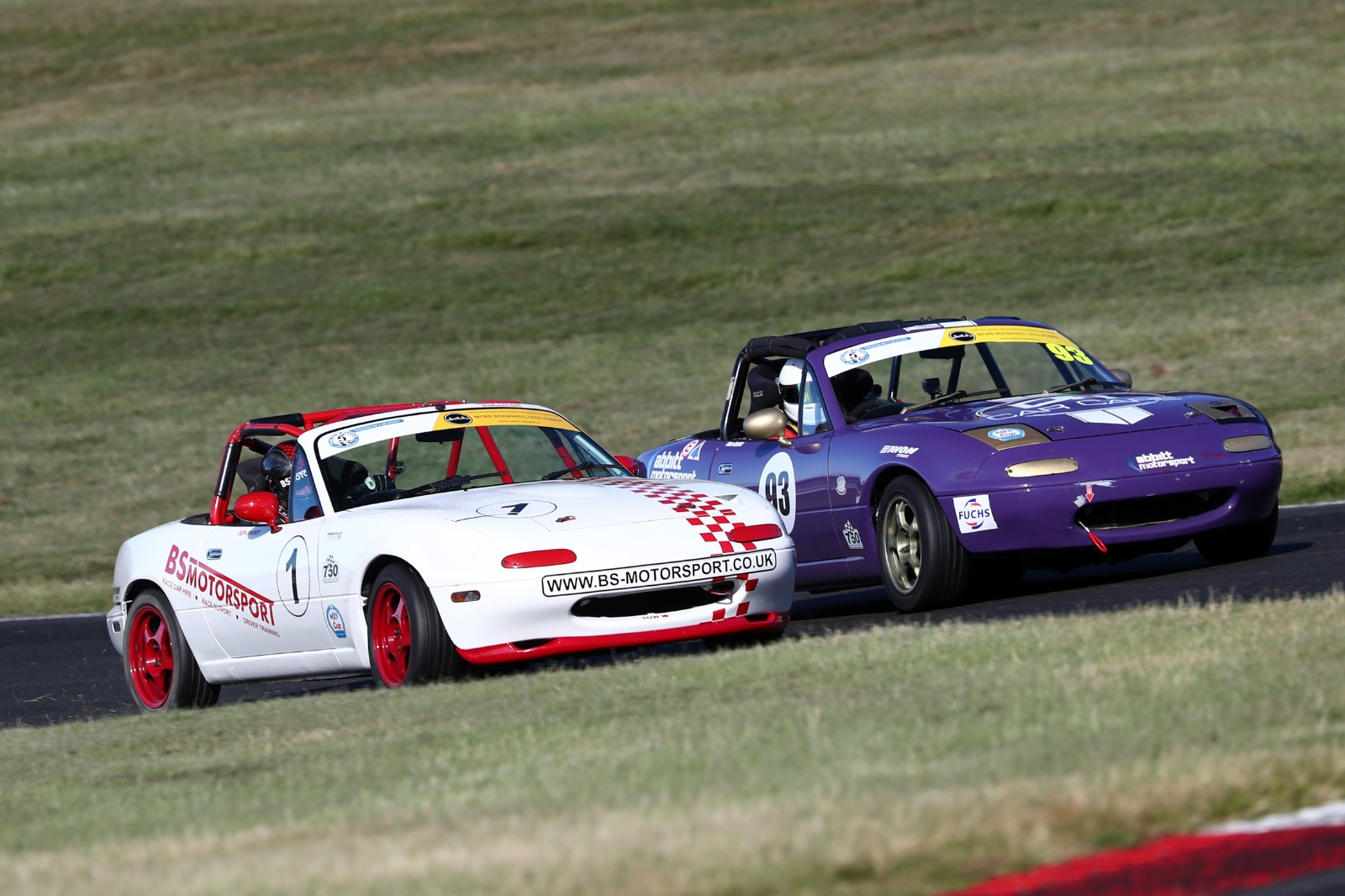 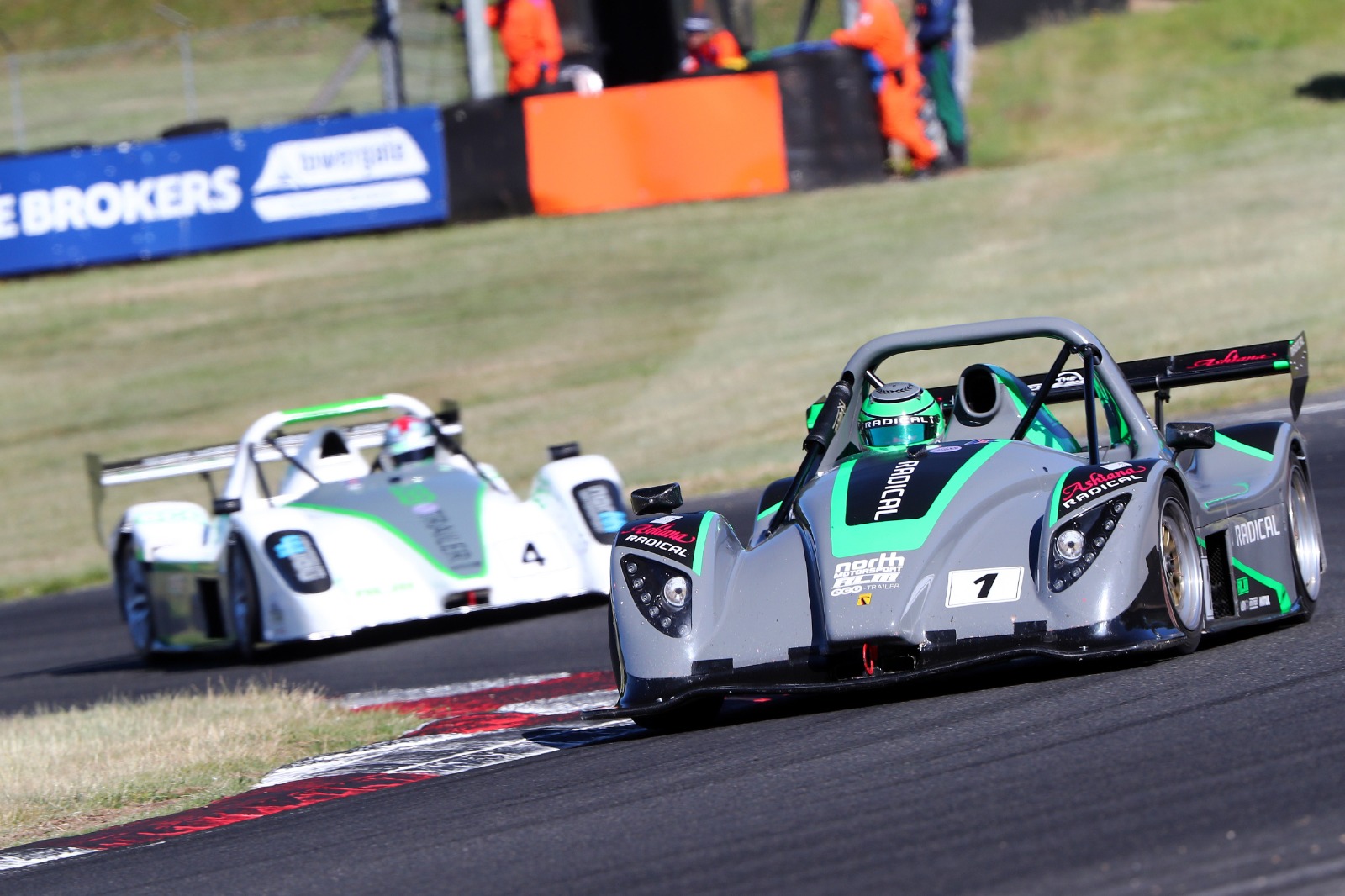 Leon Morrell was one of three different Bikesports victors