The raw statistics suggest Luke Browning was never troubled on his way to winning the 2022 GB3 Championship, living up to his pre-season tag as title favourite. With more wins, podiums and laps led than his rivals, the Briton earned the title, but the story of the season is one of a hard-fought, season-long championship battle.

The 2020 British Formula 4 champion had decided against the category last term, instead focusing on the German F4 series – finishing third – while his former F4 rival Zak O’Sullivan took the GB3 title in convincing style.

PLUS: How rocket O'Sullivan banished painful memories with GB3 glory

Despite a win at Oulton Park in a one-off appearance with Fortec Motorsports last year, Browning’s decision to commit to a full-time GB3 campaign with Hitech GP in 2022 seemed like a sideways career move at best to some. There were no guarantees of success, especially as a new car – the Tatuus MSV-022 – was introduced ahead of the season with an increase of around 50bhp and 20-25% more downforce, which teams needed to get to grips with.

But, at the opening Oulton round, Browning was untouchable, recording a double pole/victory combination even if the weekend was blighted by a retirement in the full reversed-grid race. But any thoughts that the season would be a walkover soon disappeared.

“We were so quick at the start of the season, I mean to the point we were slowing ourselves down to make sure that it wasn’t so obvious,” admits Browning. “Especially in these cold conditions, we just had the car absolutely nailed.

“[But] people got on the pace so much quicker than we thought and it almost caught us out a little bit. It’s been a constant sort of progression, trying to keep ahead of the curve the whole time.”

Two further podiums followed at Silverstone but, somewhat surprisingly, Browning lost the championship lead as Fortec’s Joel Granfors moved ahead by three points. The Swede, with a single British F4 victory to his name in 2021, had already proven himself something of a dark horse at the first round, qualifying on the front row twice before being demoted for race one after blocking during the session. 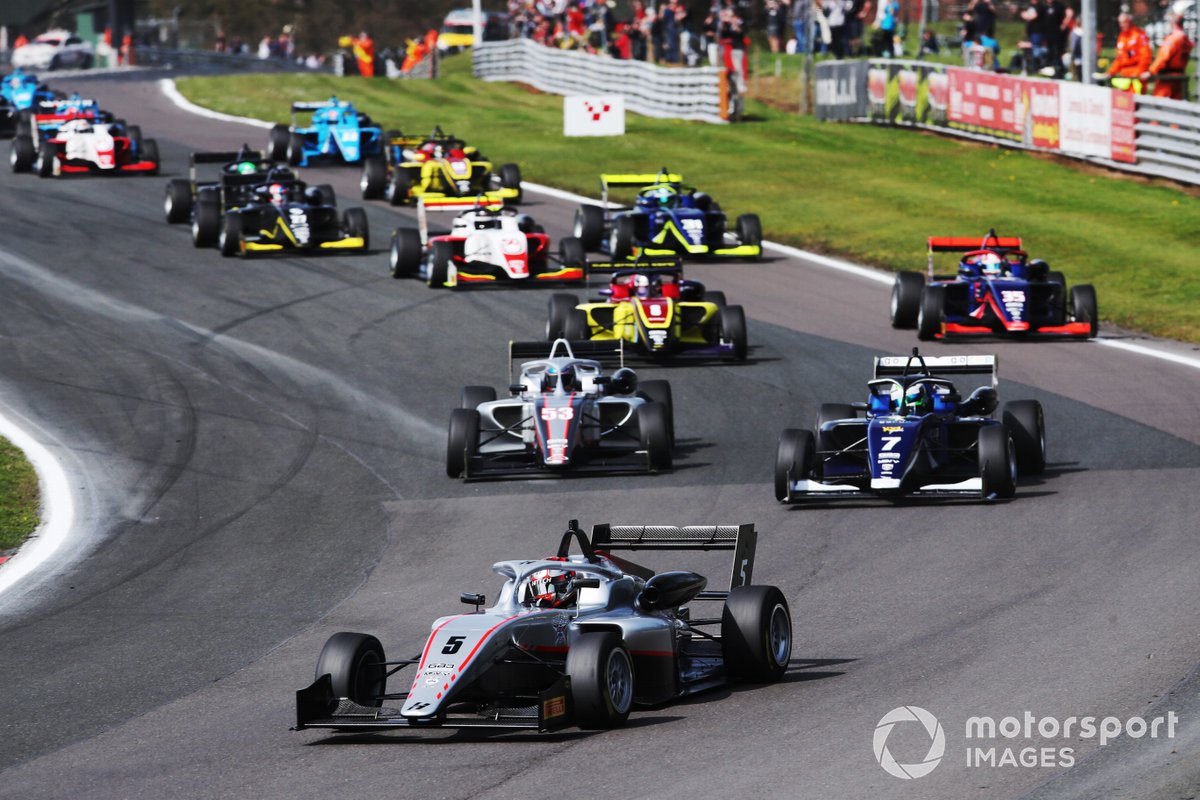 Browning started the year as he meant to go on in dominant fashion at Oulton Park, but it didn't always play out that way

A win in the opening Silverstone race and a further podium launched the Fortec driver to the top of the standings and marked him out as a season-long title rival, with the points lead changing no fewer than six times between the pair.

“He’s been an incredible opponent and I can’t talk highly enough about him, he’s probably one of the most underrated drivers in the paddock,” says Browning.

Granfors adds: “It’s been a good year to battle with him. I think that’s been a good experience for me, you really have to push to 100% to beat him because he’s really quick.”

Granfors held the initiative after Donington, where both retired in the first race after getting caught up in an accident, before another win for Browning at Snetterton swung the title again in his favour.

On the trip to Belgium, Browning asserted his dominance by taking another comprehensive pole/victory double at Spa, despite never having raced at the circuit before, and stretched his advantage in the standings to 30.5 points.

Hitech claimed that the part had been unavailable earlier in the year due to a shortage of spares with the introduction of the new car, which was confirmed by championship organiser MotorSport Vision. But, for that weekend, the part had been available

Then came the second visit to Silverstone. Having secured pole for the opening race, Browning – along with Hitech GP team-mates Cian Shields and Bryce Aron – was excluded from the results due to a technical infringement.

The issue centred on a piece of metal trim that sits on the leading edge of the plank, but was missing from the Hitech machines. The consensus among most in the paddock was that there was no performance benefit to running without the part – although in theory the car could be run lower. Hitech claimed that the part had been unavailable earlier in the year due to a shortage of spares with the introduction of the new car, which was confirmed by championship organiser MotorSport Vision. But, for that weekend, the part had been available, and Browning was consigned to starting all three races from the back.

“To put it on pole and to lead [the standings] heading into the meeting by 30-odd points, and then just have all those points stripped was absolutely gutting,” he says. “But that’s when I thought I’ve got to get my head down and catch up. I had to do him [Granfors] in every race to do it and that’s where the racecraft and experience really helped me get through the pack and be smart in certain situations.” 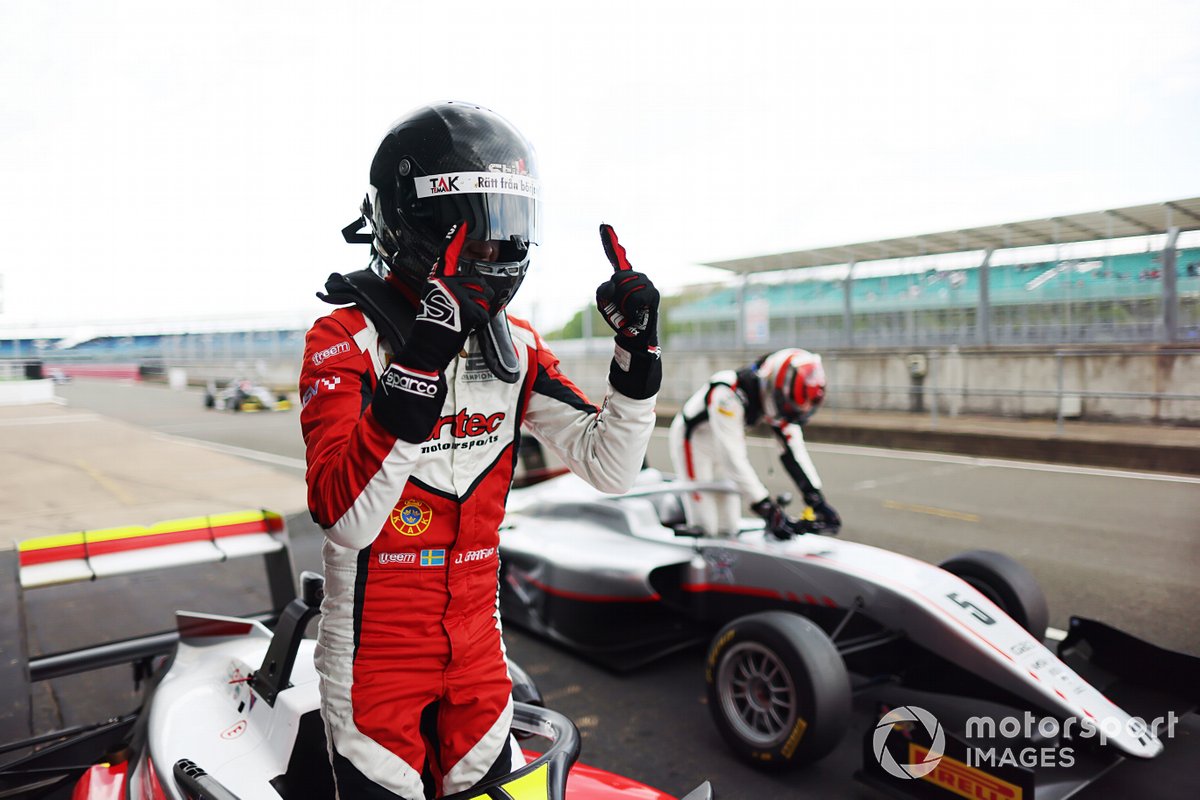 Granfors emerged as Browning's closest rival for the title

To make matters worse, Granfors secured his second, and what would prove to be final, win of the season, and a further two podiums – which included a sensational charge through the field from 18th in the full reversed-grid race.

“I think I learned a lot through all the weekends, but Silverstone was a great weekend to learn overtaking,” says Granfors. “I think that’s also been one of the most learning curve weekends, if you can call it that.”

Browning lost the lead in the standings but his 47 points from the meeting – his lowest total of the season bar the first visit to Donington – proved pivotal, as come the end of the year, 46.5 points separated the pair.

Perhaps of more significance, Browning found another level across the final two events and scored his two highest points totals at Brands Hatch (73) and Donington (76), all without scoring a win. His driving at the former in particular indicated a racer who was grabbing the championship by the scruff of the neck.

Having qualified behind Granfors for both races, the 2022 Aston Martin Autosport BRDC Young Driver of the Year finalist muscled ahead on each occasion with decisive and firm opening laps to take vital points away from his rival and regain a championship lead he never lost again.

For the final round at Donington, Browning put in a champion’s drive – quite literally – in the second race. With the majority of the field using wet tyres on a damp but quickly drying track, he bided his time, eventually moving ahead of early race leader Granfors having run side-by-side through Goddards and Redgate – the respect between the pair clear on and off the track.

Browning adds: “We’ve not crashed into each other once during the whole season, which is rare for championship rivals.”

The title protagonists certainly weren’t the only drivers to impress, with Callum Voisin making the jump into single-seaters seamlessly with Carlin. The Ginetta Junior graduate was best of the rest for most of the season as he often matched the raw speed of Browning and Granfors, securing three wins. 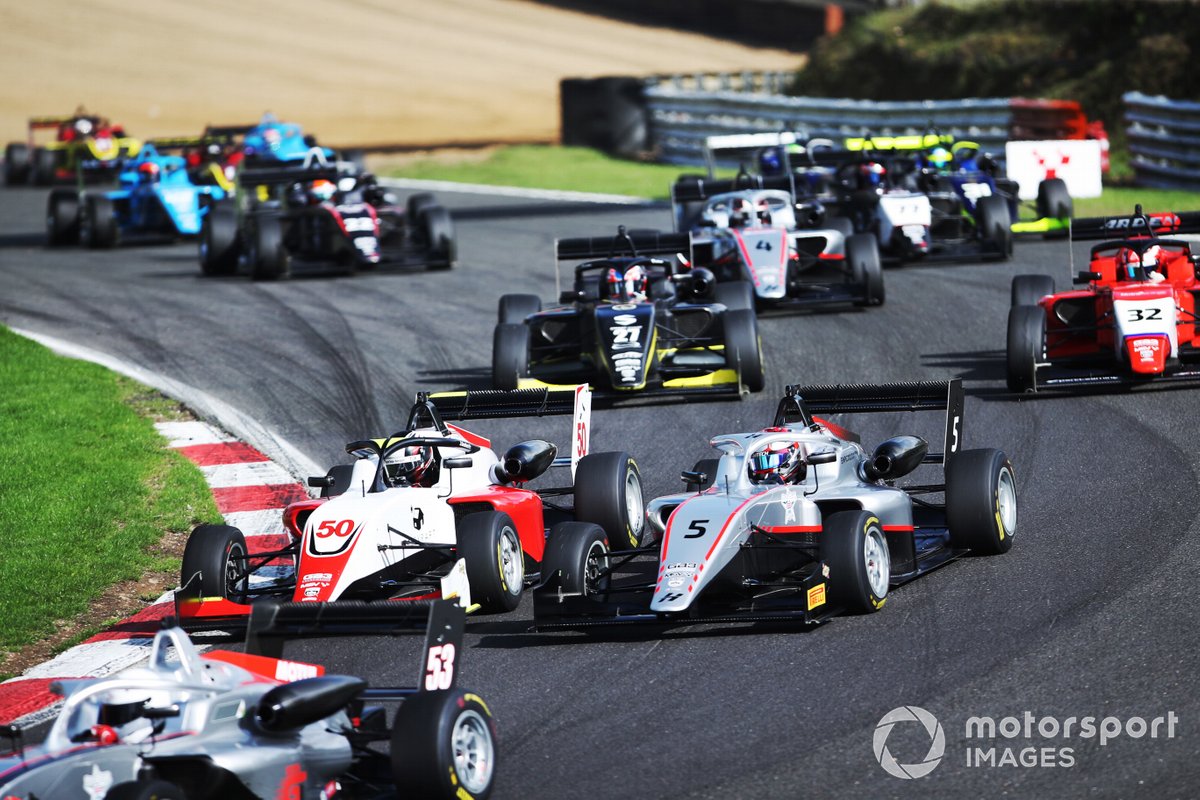 He just lost out to sophomore Tom Lebbon in the final standings, the Elite Motorsport driver proving himself to be a master of Silverstone with two wins, as well as a well-judged performance in the damp-to-dry Donington race.

For Browning, his success makes him the only driver to secure the GB3 and British Formula 4 titles: “We deserved it and it’s nice this year to be able to seal it and have absolutely no doubts that I’m a deserved champion. It’s a nice feeling.”

5. Max Esterson
Pips Matthew Rees to the final spot after both took a win and two further podiums in their maiden GB3 campaigns. Each suffered from lack of pace at times, but the American stayed out of trouble more having also come into the season with less experience of slicks and wings.

4. Tom Lebbon
Hit his stride in the second half of the campaign, scoring wins in each of the final three rounds with only Browning beating his season total of four. Proved himself to be best of the rest, but loses out to Voisin here with it being his second year in the championship.

3. Callum Voisin
Excelled in maiden season of single-seaters, taking three victories and same number of pole positions (five) as Browning. Brands was the low point, with two accidents across the meeting, but trounced Carlin team-mates and sophomore drivers Roberto Faria and Javier Sagrera.

2. Joel Granfors
Despite less experience than Browning, the Swede kept him honest throughout the season. Showcased impressive racecraft, notably in the second Silverstone full reversed-grid race, becoming the only driver to score a podium in every race at a meeting.

1. Luke Browning
Incredible consistency was backbone to his campaign, securing podiums in all but three non-reversed-grid races, one of which was a retirement not of his own making, with the other two being from back-of-the-grid starts at Silverstone. Made no major mistakes. 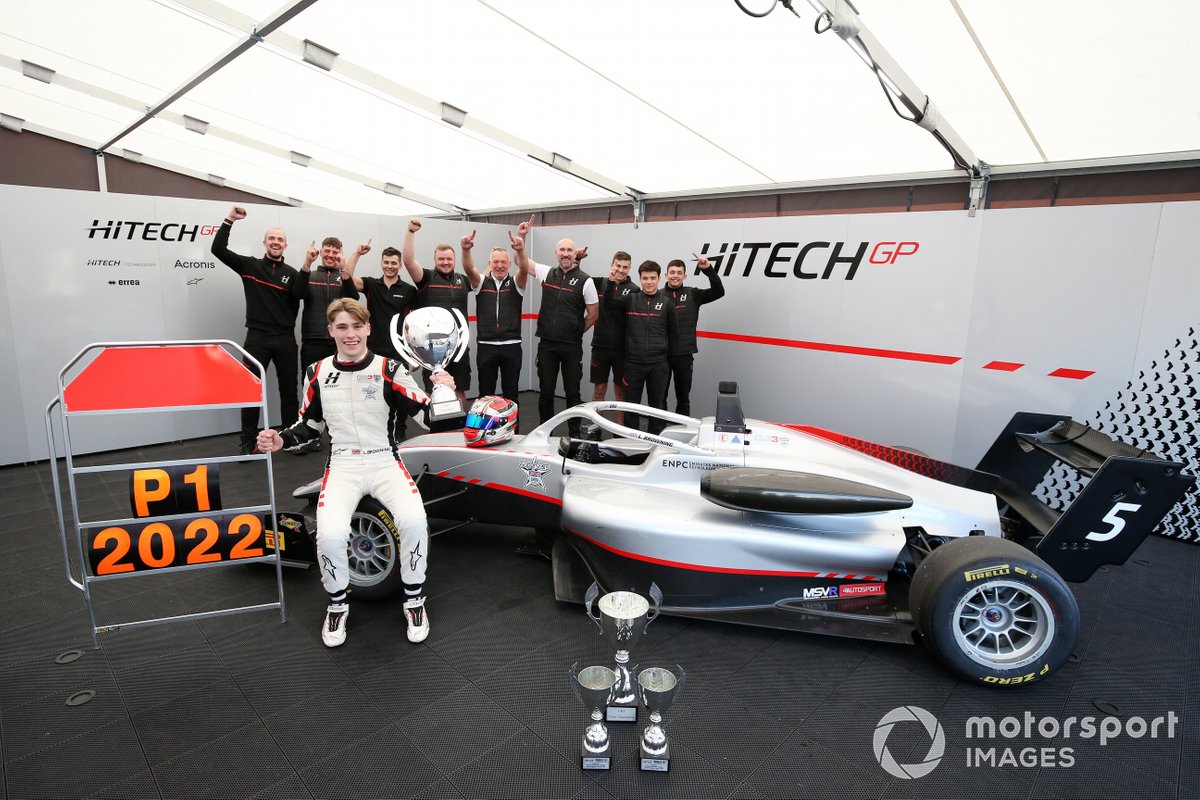