It was a weekend full of historic action, as the Castle Combe Autumn Classic and Spa Six Hours attracted a plethora of machinery. More modern cars were in action at Snetterton where the competitive Sports 2000 title was decided.

Tom Waterfield demonstrated considerable prowess in defending his Freddie Giles Memorial Frazer Nash title at the 10th Castle Combe Autumn Classic. His other victory, aboard Tim Ross’s ex-Jim Russell Cooper-Norton Mk9, was poignant, since British Formula 3 champion Russell won the 500cc standalone race 66 years ago, the last such contest at the venue until 2014.

That meeting, on 1 October 1955, marked a high in Combe’s history. Huge crowds flocked to see Franco-American Harry Schell (Vanwall) win the Avon Trophy F1 feature race and the Empire News Trophy Formule Libre finale from Ron Flockhart’s shrieking BRM V16, but there was a bitter aftertaste. The International fixture incurred losses and, while motorcycle meetings continued, it was the venue’s last car event until 1962.

Waterfield’s victory, in mother Jo’s 1500cc Meadows-engined Super Sports this time, was as compelling a display of control for sodden onlookers as his Cooper win. On pole by 9.7 seconds on a treacherous surface, Waterfield might have been expected to lap the 500cc field. Driving precisely, the 23-year-old led by 5.3s after a lap, then tempered his instinct to charge but still won by 17.5s. “I love these conditions, but got my head down and didn’t look back,” he said. “I couldn’t see anything and the shiny track made it difficult to tell deep water from puddles.”

Buoyed by stepfather Simon Blakeney-Edwards’s 1.2s victory over Tim Kneller (Riley TT Sprite) in the Vintage Sports-Car Club’s Owner-Driver-Mechanic race for pre-war machines, which lost front-row qualifier Clive Fidgeon’s Boulogne II after practice, Waterfield lined up seventh of 23 chain-gangers for the season’s Frazer Nash showpiece. The event had even attracted James Parker’s BHD GN, out for the first time in a decade.

Within a lap, Waterfield was challenging poleman Dougal Cawley, and snaked ahead when his rival’s GN ‘Piglet’ threw its fourth gear chain “down a rabbit hole”. Even without third gear, Waterfield beat David Wylie’s two-litre Super Sports by 46s. Late entrant Blakeney-Edwards threaded his Super Sports from the back, ousting Tom Walker’s GN-Ford ‘Big Yellow’ from third. 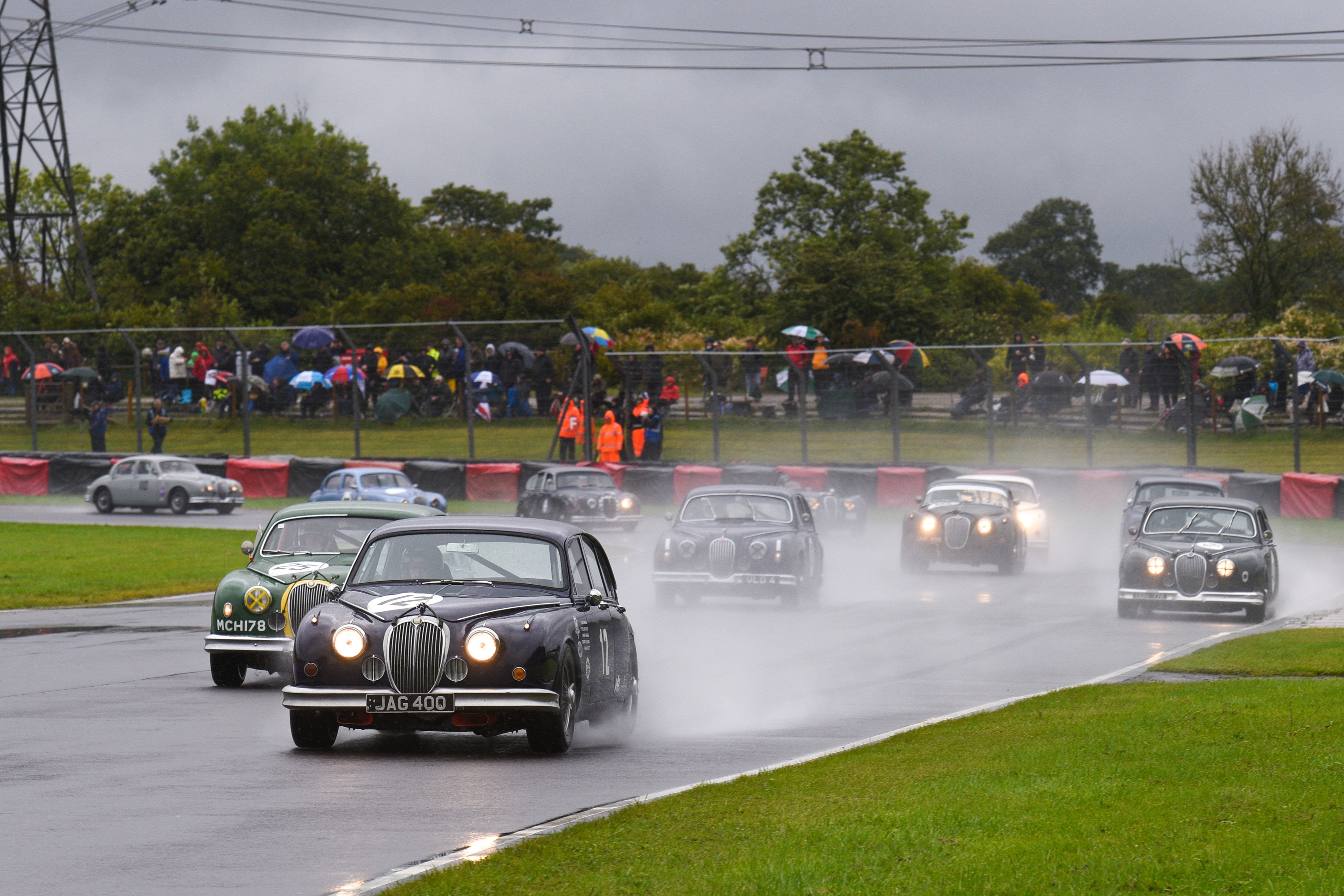 After a full-course caution while marshals cleared an incident at Camp (spinner Alice Locke’s MGB was unavoidably clobbered by Mark Martin’s Lotus Elan 26R), Mark Williams (AC Cobra) completed the podium. Tim and Laurence Jacobsen’s pilgrimage from Scotland was rewarded with a fine GT2 victory in their MGB.

Oliver Llewellyn and father Tim hydroplaned their Allard-Cadillac J2 from the back to FiSCaR Intermarque victory. David Alexander was a lap away from a maiden win when Llewellyn Sr thundered past the Lotus Elite at Folly. Marc Gordon (Jaguar XK150S) watched it unfold, clear of John Ure/Nick Wigley (ex-Tony Crook Cooper-Bristol T24/25) in third. 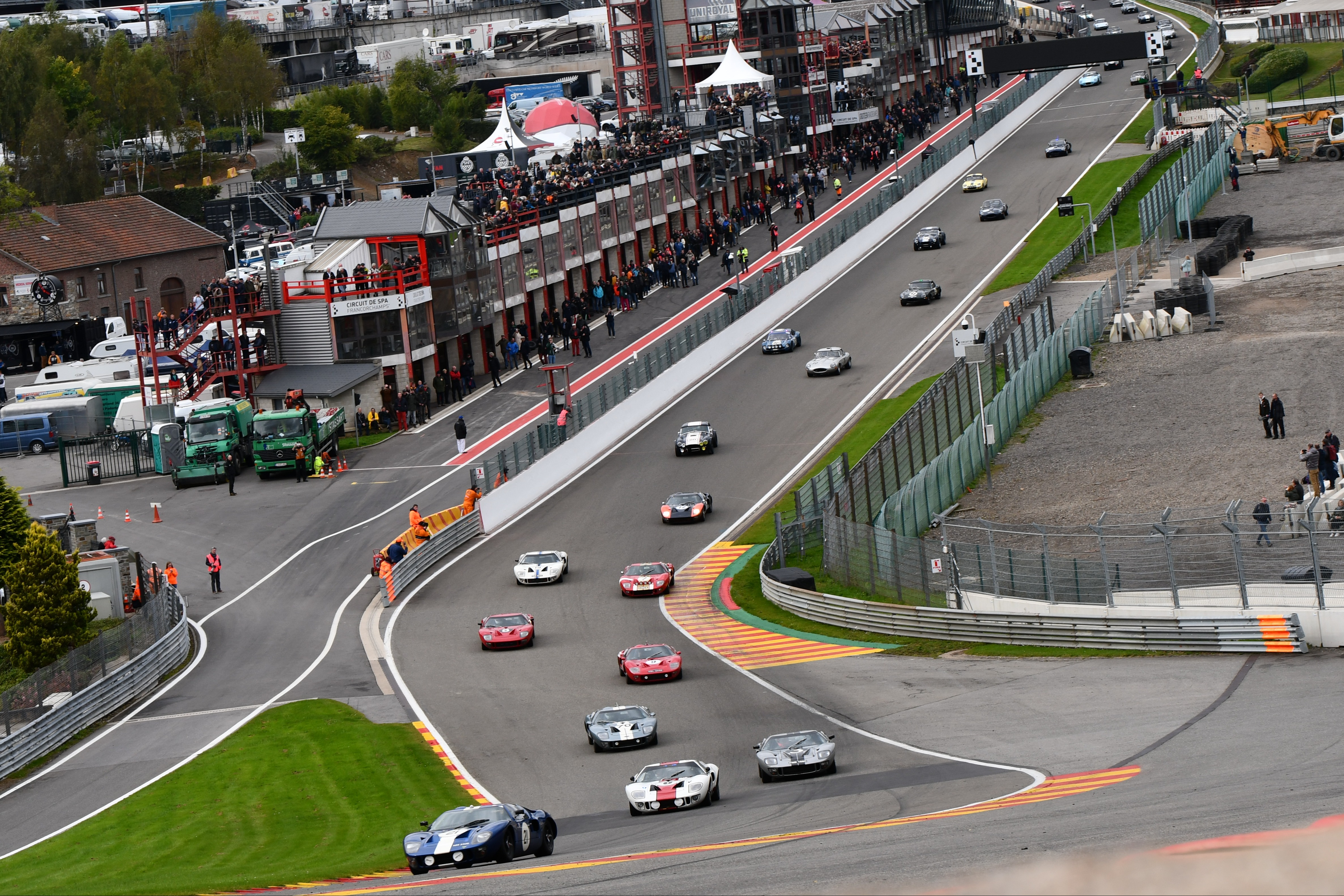 Having watched runaway poleman Frank Stippler straight-line the Les Combes chicane on lap one in 2018 victor Marcus Graf von Oeynhausen’s GT40, then spin at the Bus Stop – due to fuel leaking onto the front tyres, which erupted when Stippler pitted after eight laps – Bryant was content to let Nicky Pastorelli go in David Hart’s GT40, although the Dutchman attracted a drivethrough penalty for exceeding track limits. That car was sidelined when second driver Olivier Hart selected reverse gear at the fuel station and couldn’t disengage it.

Meanwhile, Bryant had acclimatised himself to the missing cog. “Jumping from third to fifth and back wasn’t great, but enabled us to save a huge amount of fuel, a lap’s worth for every 10, in a race with only three safety cars,” he said. 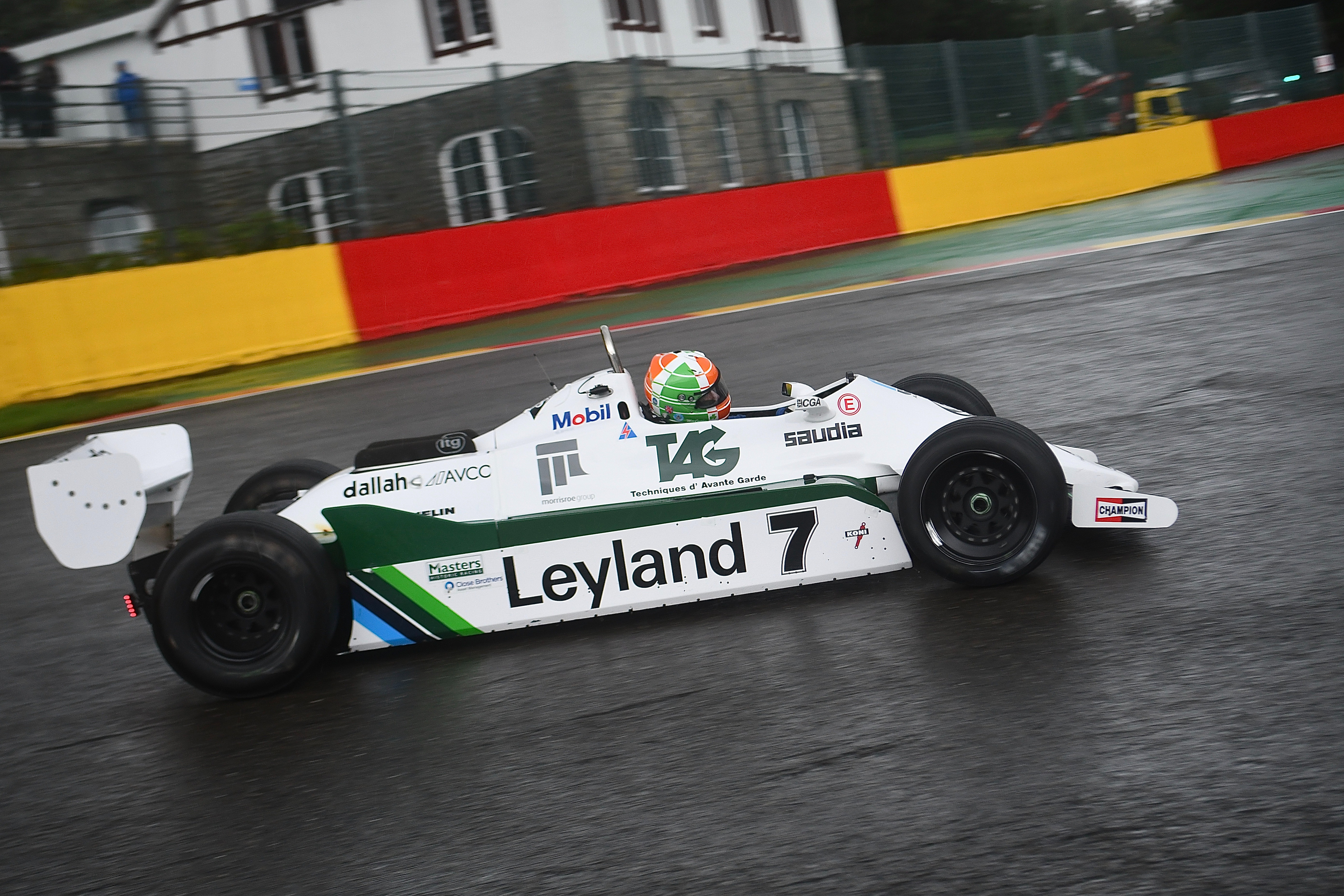 In a race which, unusually, only featured light rain in the final minutes, there was another shock in store for Bryant. Tony Wood, heading for a probable second with Miles Griffiths, crashed his GT40 at Pouhon. He nursed the car back to the pits, but lost part of its damaged body en route and Bryant collected it. “It took out my spotlamps and I felt sure it must have done the radiator, so I watched the temperature gauge like a hawk,” he said. “Fortunately the needle didn’t move!”

Travel and non-EU transport logistics, which meant Six Hours starters were down 20%, hit the other races too. One grid that did well, though, was Historic Formula Junior in which Alex Ames and Manfredo Rossi di Montelera, guesting in Andrew Beaumont’s Lotus 22, won a race apiece in the company of Mark Shaw (Brabham BT6). Kieft racer Nic Carlton-Smith secured the UK title, but former powerboat racer Stuart Tizzard (Cooper T56) almost ended his unbeaten class run in Sunday’s wet stanza. 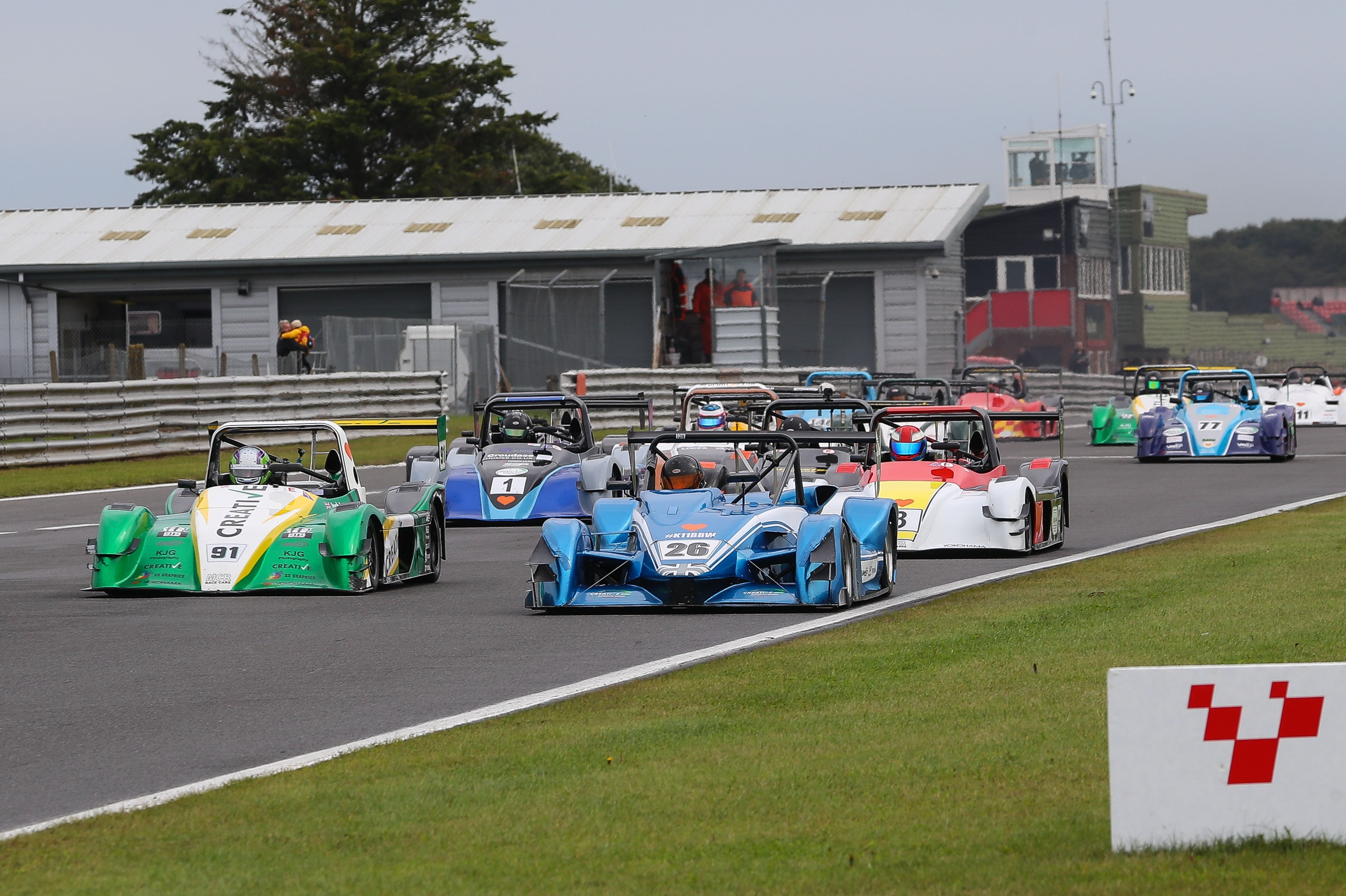 Tom Stoten claimed his third overall Sports 2000 title thanks to firing his Gunn TS11 to a brace of wins at Snetterton last weekend.

Josh Law (MCR S2) was never headed in the wet first race, in which he was initially chased by Stoten from the MCRs of outgoing champion Michael Gibbins and Dominic Lesniewski. As Law’s lead grew, the duel for second intensified, until Richard Johnson split Stoten and Gibbins on lap three and clinched second into Agostini on the final lap. Gibbins claimed third over Stoten.

It was dry for the second race, and Stoten took a lights-to-flag win, with Law in second throughout. Gibbins spent a number of laps challenging Lesniewski for third and made it through exiting Wilson on lap five of 11. Lesniewski was running on his own when he slipped up at Agostini on the last lap, which allowed Timothy Tudor to take fourth in another MCR.

Stoten secured his second win in a restarted finale, leading from the opening lap and defending throughout from Law. Gibbins was a solitary third and the MCR of Johnson completed the top four.

Peter Morris and James Caley split the victory spoils in the Porsche Club contests. Race one started in the dry, with Morris in charge, while title contender Simon Clark got it all wrong at Agostini and forced Mark McAleer onto the grass in avoidance.

McAleer still managed to oust Morris on the opening lap, with Chris Dyer and Caley third and fourth, before McAleer was forced into the pits with a puncture two tours later. Morris was left in charge until Dyer’s Cayman challenged, before it became a four-car battle with Jake McAleer’s Cayman joining Caley’s 997.

Dyer was ahead as they completed lap six of 10 but, as he exited Wilson, Morris was alongside again and was ahead out of Turn 3. As his lead grew to become decisive, Dyer and Caley were able to consolidate second and third. McAleer Jr was the loser, with Kevin Molyneaux demoting him to a distant fifth, ahead of Richard Ellis. 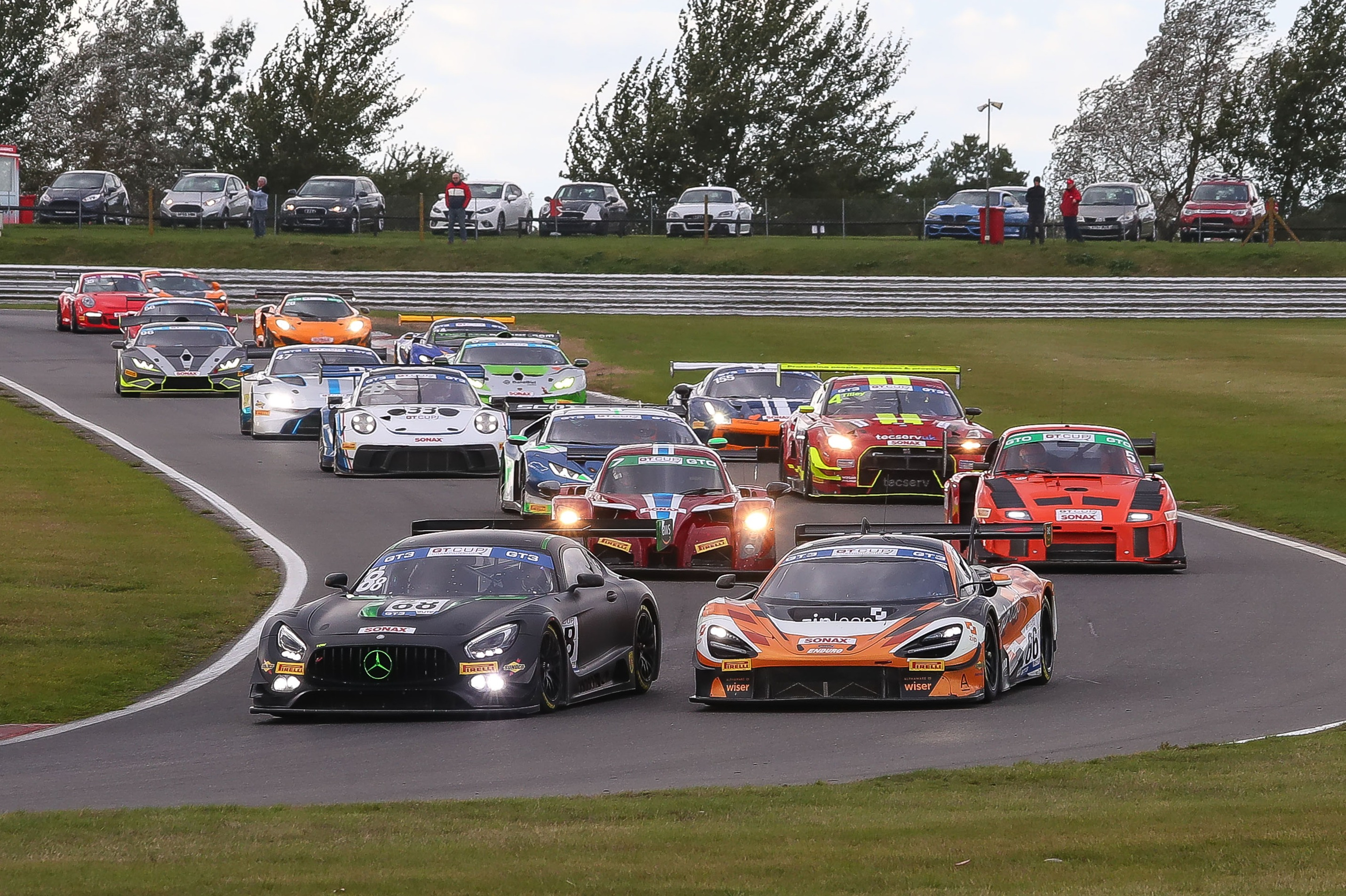 It was very wet for the second race, and Caley mastered the conditions with a lights-to-flag victory, while Dyer and Ellis (996) both held station to complete the podium. Morris had been fourth from the opening lap, but soon had McAleer Sr and Clark closing in, both relegating Morris’s 997 on lap six.

Ben Powney’s Jedi was a double winner in the Monoposto Tiedeman Trophy. In a restarted race one, Nikita Abramov’s similar Jedi held the narrowest of advantages for three laps, before Powney powered ahead past the pits. Gradually Powney pulled away, while Mark Betts (Jedi) lost out to Karl O’Brien (Leastone) for third on the last lap. The Dallara F301 of Lee Fern was fifth, after Dan Gore’s Jedi pitted with a misfire.

Powney led from the opening lap of race two and, after two initial safety car laps, soon shook off Abramov’s challenge. Betts took third. After holding fourth from start, Jedi pilot Max Windheuser was forced to surrender to O’Brien on the last lap.

After a safety-car start on the wet track, Scott Parkin led the Trackday Championship encounter in his VW Golf TDI until lap six of 14, when Justin Roberts’s Honda Civic Type R took charge. The compulsory stops were made during a second safety-car period, and Roberts rejoined with his lead intact. From the green flag, both made good their escape for a two-lap sprint to the finish, and Roberts held on by 0.413 seconds.

Dylan Brychta’s SEAT Ibiza was first on the road in the Trackday Trophy but, with the chequered flag shown after only 26 of the planned 45 minutes, he hadn’t made his compulsory stop and was given a penalty in lieu, dropping him to fourth. Brothers Scott and Ryan Parkin – in VW Golf and Audi TT respectively – were promoted, with Sam Gay/Colin Tester (Honda Integra) third.

It was an easy win for Ben Cochran’s Van Diemen LA10 in Heritage Formula Ford, but there was a brilliant scrap for second, with Neil Hunt (Mondiale) just 0.001s ahead of Paul Tucker (Swift) when it mattered. The Saturday race was a victim of the heavy rain, as was the planned Snetterton Saloons contest. Both 911 Challenge races were held and Robert Hollyman’s Porsche 964 won each at a canter. 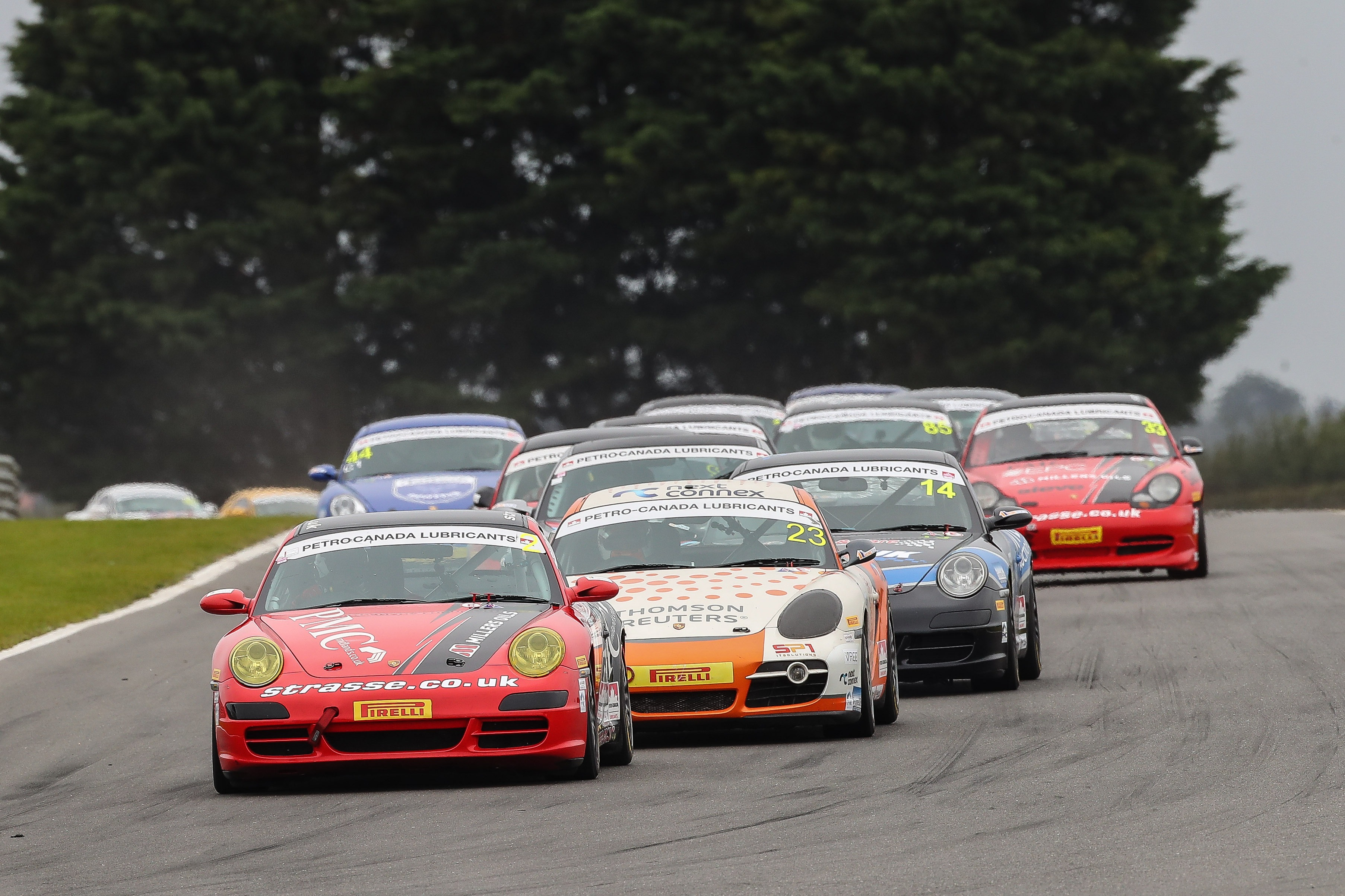