The Barbados-born driver entered the weekend level on points with rival Sebastian Alvarez, but Maloney went into the final contest five points behind Alvarez after they each took a win in the opening two races.

The two title contenders started next to each other in fourth and fifth on the race three grid but Maloney grabbed second at the start, after a brilliant getaway, and began to put the pressure on Alvarez's Double R team-mate Louis Foster.

Maloney duly grabbed the lead on lap five of 12, as Foster ran wide - struggling with wet tyres on a drying track.

As Maloney went on to win, Alvarez's race unravelled.

A wide moment at Stirlings cost him momentum and he dropped from fifth to seventh, before his hopes literally went up in smoke as he stopped at Druids with flames coming from the rear of his car.

Maloney has now become the fourth Carlin driver to claim the championship in the five seasons since the series began.

"The championship is always really close and I've won it - it's amazing!" said Maloney.

"It's unfortunate for Seb to end his championship that way but I'm sure he will bounce back.

"My tyres were completely finished and I was just trying to bring it home and not put it in the fence."

The 16-year-old added he is looking step up to F3 next season, but does not yet know which of the multitude of different F3-level series he will compete in.

It was initially Foster who held the points advantage over the first few weekends of an eventful season as he continued to demonstrate the strong form he showed in Ginetta Junior last year - when he only just missed out on the title. 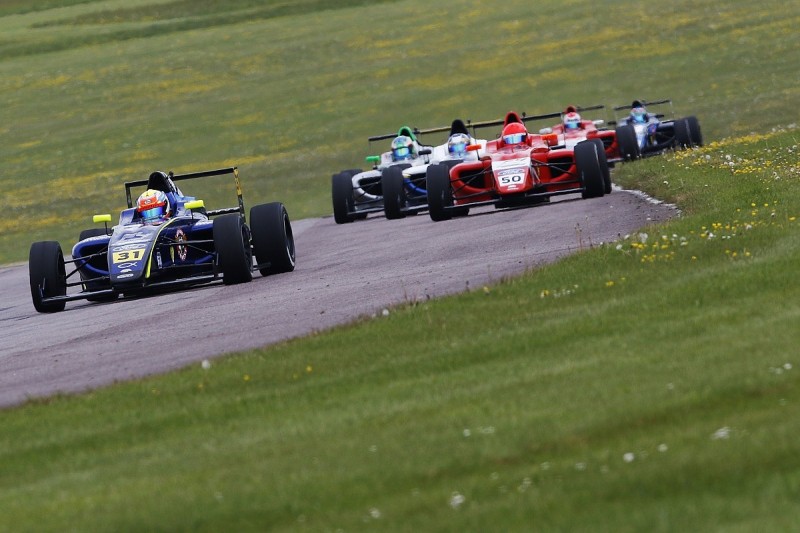 But it was not long before car racing rookie Maloney was fully up to speed and he won seven of the nine races held across Thruxton, Croft and Oulton Park in May and June to put himself in a commanding position at the head of the standings.

He was unable to match that form in the second half of the season, however, as Alvarez - who was only 12th in the F4 standings in 2018 - grew stronger and his consistency allowed him to completely eliminate Maloney's points advantage.

The pair then collided when fighting for second in the final race at Silverstone last month, setting up the Brands winner-takes-all finale.