Despite his Academy Motorsport Aston Martin Vantage GT4 suffering extensive damage, Alex Toth-Jones was able to use his experience to score a hard-earned points finish at the latest British GT round at Donington Park.

The Aston Martin Racing Academy driver was hoping to continue his impressive run of form in the UK's premier endurance category, having taken his and the team's best result of the season last time out at Silverstone.

And although there were several incidents early on in the Donington race last weekend, Toth-Jones and team-mate Will Moore were able salvage tenth in class.

Even with extensive damage to the Vantage after the collisions Toth-Jones was able to put in an impressive stint in difficult circumstances.

"Twenty minutes into the race you don't expect to be heavily damaged having had lots of contact from other cars," he said.

"It did a lot of frontal damage the contact with the GT3 car, we were about a second and a half slower. We lost all the front end downforce and it did quite a lot of damage to the steering which made a massive difference to the handling. Fifty minutes of my stint was done with a damaged car."

With crucial information relayed to the team during his stint, Toth-Jones was able to communicate with them how bad the damage was and repairs were made at the scheduled stop.

"I was telling the team the car was in a bad way, we can continue like this but we're not going to go any quicker but we can finish the race with the car like this," added Toth-Jones.

"When we did the driver change when the car came to a stop the front end fell apart so we lost another minute in the pits repairing it together.

"I can't believe the guys got the front back together. They surprise me every time they do a pitstop." 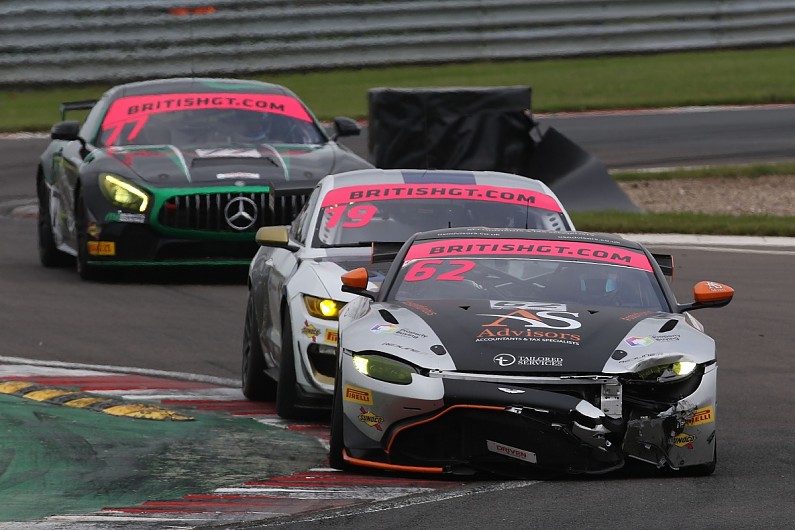 Having passed the halfway point of the season Toth-Jones and Moore have formed a strong partnership, a crucial aspect of endurance racing, and one which has helped push the team to find greater performance.

"I think me and Will have got a really strong relationship, we understand each other," said Toth-Jones, who is one of 23 drivers vying for an AMR junior role with the famous British marque.

One of the key attributes between the pair is a similar driving style and the chance to relay information to each other when one of them is out on circuit.

"There's always going to be differences in driving styles but we are quite similar, we want a positive front end and can deal with the rear," added Toth-Jones.

"We've both come from driving Ginetta G40s where you want to make it as pointy as possible so we do have a similar driving style.

"The characteristic of the Aston Martin is it can be quite understeery so we're trying to find a way around that, it's been a big learning curve for us and the team."