Xfinity regular Justin Haley claimed a shock victory at Daytona in just his third NASCAR Cup Series start, after the race was truncated by stormy weather that wrong-footed Kurt Busch

On lap 119 of the scheduled 160, stage two winner Austin Dillon picked up momentum off of Turn 4 and passed race leader Denny Hamlin's Joe Gibbs Racing Toyota through the Tri-Oval.

Stewart-Haas Racing's Clint Bowyer followed Dillon and moved to the inside of the Richard Childress Racing driver on the approach to Turn 1.

But Dillon aggressively blocked Bowyer and the two made heavy contact, with Dillon spinning in front of the field and collecting over 20 cars.

Busch squeezed through on the outside and Haley, who was running in 27th, also managed to avoid contact.

The rain had led to the postponement of the race on Saturday evening and it returned to pose the threat of a potential race-ending red flag.

As a result, Busch initially opted not to pit in order to retain the lead.

When officials declared there was one lap remaining before the restart, Busch and several others dived into the pitlane and handed the lead to Haley who had stayed out.

A lightning strike 7.4 miles away from the circuit then forced officials to abort the restart, leading to a red flag and a disgruntled Busch to take 10th. 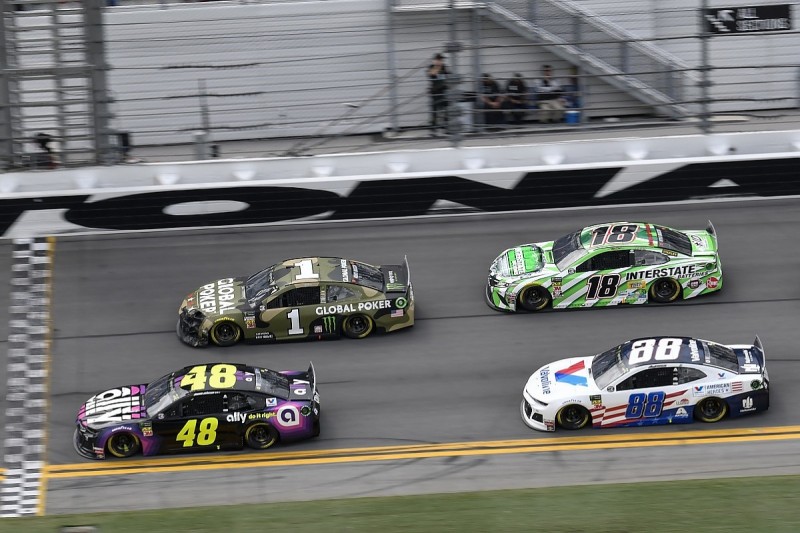 Haley, who is not eligible for a playoff spot as a part-time driver, was declared the winner after further storms.

Busch's race had already proved complex in stage two when he hit the wall at Turn 1, cutting a tyre and spinning at Turn 3.

He finished the stage in 30th before charging back through the field at the start of the final stage.

Pitting for fuel at the start of the final caution period, Hendrick Motorsports' William Byron and Jimmie Johnson ended up finishing second and third.

Both managed to narrowly avoid being caught in lap 119's pile-up.

Ty Dillon and Corey LaJoie also secured career-best results after emerging from the lap 119 chaos unscathed to end up fourth and sixth respectively.

Roush Fenway Racing's Ryan Newman finished between them in fifth.

Newman's team-mate Ricky Stenhouse Jr - who was spun out of the lead by Busch at the start of stage two - propelled Joey Logano to a stage one victory via a tandem draft on the back straight on the final lap.

Both drivers were later collected in the pile-up.

Logano passed Kevin Harvick to win the opening stage but when the SHR driver attempted to draft with Brad Keselowski, Harvick tagged the rear of the Penske Ford on lap 83.

Keselowski slammed into the outside wall and Harvick picked up significant damage. David Ragan was also caught up in the incident, along with Daniel Suarez and Daniel Hemric.

Logano on pole for NASCAR Daytona after lightning stops qualifying